Expression Profiles of Alkaloid-Related Genes across the Organs of Narrow-Leafed Lupin (Lupinus angustifolius L.) and in Response to Anthracnose Infection
Previous Article in Special Issue

Common buckwheat (Fagopyrum esculentum Moench), a pseudocereal crop, produces a large number of flowers, but this does not guarantee high seed yields. This species demonstrates strong abortion of flowers and embryos. High temperatures during the generative growth phase result in an increase in the degeneration of embryo sacs. The aim of this study was to investigate proteomic changes in flowers and leaves of two common buckwheat accessions with different degrees of heat tolerance, Panda and PA15. Two-dimensional gel electrophoresis and mass spectrometry techniques were used to analyze the proteome profiles. Analyses were conducted for flower buds, open flowers capable of fertilization, and wilted flowers, as well as donor leaves, i.e., those growing closest to the inflorescences. High temperature up-regulated the expression of 182 proteins. The proteomic response to heat stress differed between the accessions and among their organs. In the Panda accession, we observed a change in abundance of 17, 13, 28, and 11 proteins, in buds, open and wilted flowers, and leaves, respectively. However, in the PA15 accession there were 34, 21, 63, and 21 such proteins, respectively. Fifteen heat-affected proteins were common to both accessions. The indole-3-glycerol phosphate synthase chloroplastic-like isoform X2 accumulated in the open flowers of the heat-sensitive cultivar Panda in response to high temperature, and may be a candidate protein as a marker of heat sensitivity in buckwheat plants. View Full-Text
Keywords: common buckwheat; high temperature; proteomics; heat-affected proteins common buckwheat; high temperature; proteomics; heat-affected proteins
►▼ Show Figures 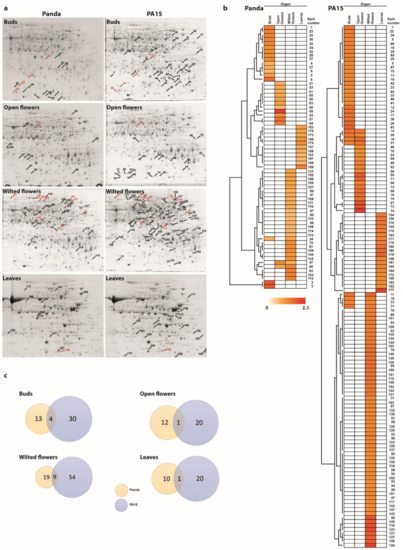