Regulatory Peptides in Asthma
Next Article in Special Issue

Fusarium head blight (FHB) of wheat, caused by Fusarium graminearum (Schwabe), is a destructive disease worldwide, reducing wheat yield and quality. To accelerate the improvement of scab tolerance in wheat, we assessed the International Triticeae Mapping Initiative mapping population (ITMI/MP) for Type I and II resistance against a wide population of Argentinean isolates of F. graminearum. We discovered a total of 27 additive QTLs on ten different (2A, 2D, 3B, 3D, 4B, 4D, 5A, 5B, 5D and 6D) wheat chromosomes for Type I and Type II resistances explaining a maximum of 15.99% variation. Another four and two QTLs for thousand kernel weight in control and for Type II resistance, respectively, involved five different chromosomes (1B, 2D, 6A, 6D and 7D). Furthermore, three, three and five QTLs for kernel weight per spike in control, for Type I resistance and for Type II resistance, correspondingly, involved ten chromosomes (2A, 2D, 3B, 4A, 5A, 5B, 6B, 7A, 7B, 7D). We were also able to detect five and two epistasis pairs of QTLs for Type I and Type II resistance, respectively, in addition to additive QTLs that evidenced that FHB resistance in wheat is controlled by a complex network of additive and epistasis QTLs. View Full-Text
Keywords: wheat; FHB; QTL mapping; ITMI; epistasis wheat; FHB; QTL mapping; ITMI; epistasis
►▼ Show Figures 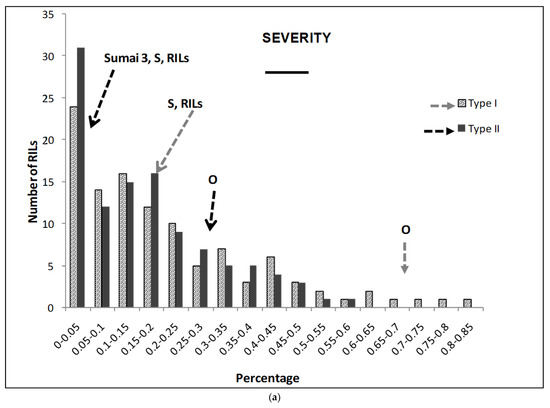