IgA nephropathy (IgAN) has been considered to have a relationship with infection in the tonsil, because IgAN patients often manifest macro hematuria just after tonsillitis. In terms of oral-area infection, the red complex of periodontal bacteria (Porphyromonas gingivalis (P. gingivalis), Treponema denticol (T. denticola) and Tannerella forsythia (T. forsythia)) is important, but the relationship between these bacteria and IgAN remains unknown. In this study, the prevalence of the red complex of periodontal bacteria in tonsil was compared between IgAN and tonsillitis patients. The pathogenicity of IgAN induced by P. gingivalis was confirmed by the mice model treated with this bacterium. The prevalence of P. gingivalis and T. forsythia in IgAN patients was significantly higher than that in tonsillitis patients (p < 0.001 and p < 0.05, respectively). A total of 92% of tonsillitis patients were free from red complex bacteria, while only 48% of IgAN patients had any of these bacteria. Nasal administration of P. gingivalis in mice caused mesangial proliferation (p < 0.05 at days 28a nd 42; p < 0.01 at days 14 and 56) and IgA deposition (p < 0.001 at day 42 and 56 after administration). Scanning-electron-microscopic observation revealed that a high-density Electron-Dense Deposit was widely distributed in the mesangial region in the mice kidneys treated with P. gingivalis. These findings suggest that P. gingivalis is involved in the pathogenesis of IgAN. View Full-Text
Keywords: IgA nephropathy; periodontal bacteria; infection; mouse; tonsil; oral bacteria; Porphyromonas gingivalis IgA nephropathy; periodontal bacteria; infection; mouse; tonsil; oral bacteria; Porphyromonas gingivalis
►▼ Show Figures 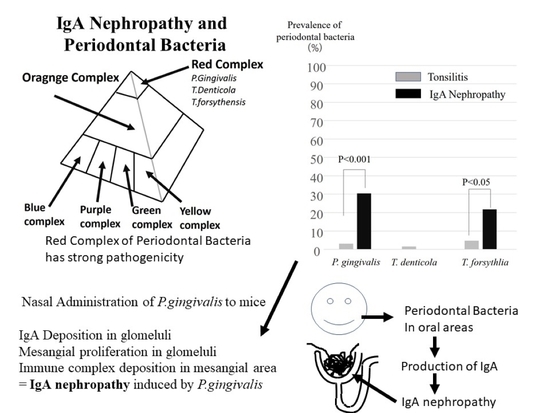