Pathogenesis and Treatment of Cytokine Storm Induced by Infectious Diseases

Transcriptomics Changes in the Peritoneum of Mice with Lipopolysaccharide-Induced Peritonitis

Peritonitis caused by LPS is a severe clinical challenge, which causes organ damage and death. However, the mechanism of LPS-induced peritonitis has not been fully revealed yet. Here, we investigated the transcriptome profile of the peritoneal tissue of LPS-induced peritonitis in mice. A model of LPS-induced peritonitis in mice was established (LPS 10 mg/kg, i.p.), and the influence of TAK 242 (TLR4 inhibitor) on the level of inflammatory cytokines in mouse peritoneal lavage fluid was investigated by using an ELISA test. Next, the peritoneal tissues of the three groups of mice (Control, LPS, and LPS+TAK 242) (n = 6) were isolated and subjected to RNA-seq, followed by a series of bioinformatics analyses, including differentially expressed genes (DEGs), enrichment pathway, protein-protein interaction, and transcription factor pathway. Then, qPCR verified-hub genes that may interact with TAK 242 were obtained. Subsequently, the three-dimensional structure of hub proteins was obtained by using homology modeling and molecular dynamics optimization (300 ns). Finally, the virtual docking between TAK 242 and hub proteins was analyzed. Our results showed that TAK 242 significantly inhibited the production of inflammatory cytokines in the peritoneal lavage fluid of mice with peritonitis, including IL-6, IFN-γ, IL-1β, NO, and TNF-α. Compared with the Control group, LPS treatment induced 4201 DEGs (2442 down-regulated DEGs and 1759 up-regulated DEGs). Compared with the LPS group, 30 DEGs were affected by TAK 242 (8 down-regulated DEGs and 22 up-regulated DEGs). A total of 10 TAK 242-triggered hub genes were obtained, and the possible docking modes between TAK 242 and hub proteins were acquired. Overall, our data demonstrated that a large number of DEGs were affected in LPS-triggered peritonitis mice. Moreover, the TLR4 inhibitor TAK 242 is capable of suppressing the inflammatory response of LPS-induced peritonitis. Our work provides clues for understanding the pathogenesis of LPS-induced peritonitis in mice. View Full-Text
Keywords: peritonitis; LPS; transcriptomic profiles; RNA sequencing; bioinformatics; molecular dynamics peritonitis; LPS; transcriptomic profiles; RNA sequencing; bioinformatics; molecular dynamics
►▼ Show Figures 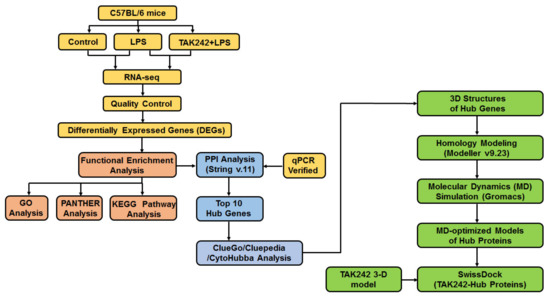