Nectar Chemistry or Flower Morphology—What Is More Important for the Reproductive Success of Generalist Orchid Epipactis palustris in Natural and Anthropogenic Populations?
Next Article in Special Issue

Impact of Posttranslational Modification in Pathogenesis of Rheumatoid Arthritis: Focusing on Citrullination, Carbamylation, and Acetylation

BMPs regulate synovial quiescence and adult neurogenesis in the hippocampus in non-stress conditions. However, changes in BMP expression that are induced by inflammation during rheumatoid arthritis (RA) have not yet been reported. Here, we show that signalling with synovial BMPs (BMP-4 and -7) mediates the effect of systemic inflammation on adult neurogenesis in the hippocampus during pristane-induced arthritis (PIA) in Dark Agouti (DA) rats, an animal model of RA. Moreover, we show gender differences in BMP expressions and their antagonists (Noggin and Gremlin) during PIA and their correlations with the clinical course and IL-17A and TNF-α levels in serum. Our results indicate gender differences in the clinical course, where male rats showed earlier onset and earlier recovery but a worse clinical course in the first two phases of the disease (onset and peak), which correlates with the initial increase of serum IL-17A level. The clinical course of the female rats worsened in remission. Their prolonged symptoms could be a reflection of an increased TNF-α level in serum during remission. Synovial inflammation was greater in females in PIA-remission with greater synovial BMP and antagonist expressions. More significant correlations between serum cytokines (IL-17A and TNF-α), and synovial BMPs and their antagonists were found in females than in males. On the other hand, males showed an increase in hippocampal BMP-4 expression during the acute phase, but both genders showed a decrease in antagonist expressions during PIA in general. Both genders showed a decrease in the number of Ki-67+ and SOX-2+ and DCX+ cells and in the ratio of DCX+ to Ki67+ cells in the dentate gyrus during PIA. However, in PIA remission, females showed a faster increase in the number of Ki67+, SOX-2+, and DCX+ cells and a faster increase in the DCX/Ki67 ratio than males. Both genders showed an increase of hippocampal BMP-7 expression during remission, although males constantly showed greater BMP-7 expression at all time points. Our data show that gender differences exist in the BMP expressions in the periphery–hippocampus axis and in the IL-17A and TNF-α levels in serum, which could imply differences in the mechanisms for the onset and progression of the disease, the clinical course severity, and adult neurogenesis with subsequent neurological complications between genders. View Full-Text
Keywords: bone morphogenetic proteins; rheumatoid arthritis; interleukin-17; tumor necrosis factor-alpha; hippocampus; adult neurogenesis; Noggin; Gremlin bone morphogenetic proteins; rheumatoid arthritis; interleukin-17; tumor necrosis factor-alpha; hippocampus; adult neurogenesis; Noggin; Gremlin
►▼ Show Figures 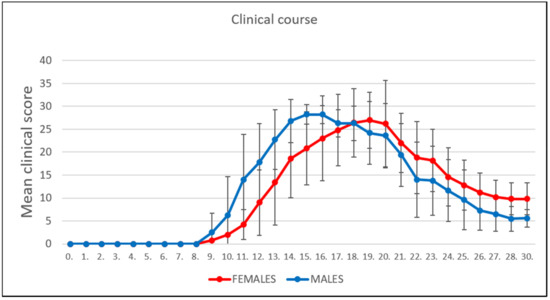