The Dopaminergic Control of Movement-Evolutionary Considerations

Dopamine is likely the most studied modulatory neurotransmitter, in great part due to characteristic motor deficits in Parkinson’s disease that arise after the degeneration of the dopaminergic neurons in the substantia nigra pars compacta (SNc). The SNc, together with the ventral tegmental area (VTA), play a key role modulating motor responses through the basal ganglia. In contrast to the large amount of existing literature addressing the mammalian dopaminergic system, comparatively little is known in other vertebrate groups. However, in the last several years, numerous studies have been carried out in basal vertebrates, allowing a better understanding of the evolution of the dopaminergic system, especially the SNc/VTA. We provide an overview of existing research in basal vertebrates, mainly focusing on lampreys, belonging to the oldest group of extant vertebrates. The lamprey dopaminergic system and its role in modulating motor responses have been characterized in significant detail, both anatomically and functionally, providing the basis for understanding the evolution of the SNc/VTA in vertebrates. When considered alongside results from other early vertebrates, data in lampreys show that the key role of the SNc/VTA dopaminergic neurons modulating motor responses through the basal ganglia was already well developed early in vertebrate evolution. View Full-Text
Keywords: basal ganglia; SNc; VTA; lamprey; salience; reward; aversion; posterior tuberculum; dopamine receptors basal ganglia; SNc; VTA; lamprey; salience; reward; aversion; posterior tuberculum; dopamine receptors
►▼ Show Figures 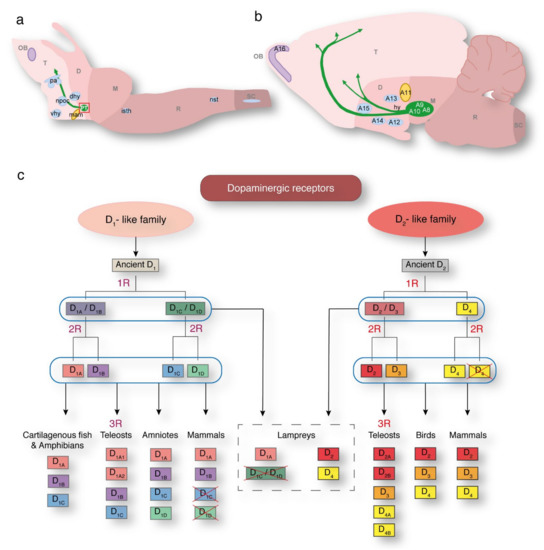