The Role of Glycoside Hydrolases in Phytopathogenic Fungi and Oomycetes Virulence

Nudt16 is a member of the NUDIX family of hydrolases that show specificity towards substrates consisting of a nucleoside diphosphate linked to another moiety X. Several substrates for hNudt16 and various possible biological functions have been reported. However, some of these reports contradict each other and studies comparing the substrate specificity of the hNudt16 protein are limited. Therefore, we quantitatively compared the affinity of hNudt16 towards a set of previously published substrates, as well as identified novel potential substrates. Here, we show that hNudt16 has the highest affinity towards IDP and GppG, with Kd below 100 nM. Other tested ligands exhibited a weaker affinity of several orders of magnitude. Among the investigated compounds, only IDP, GppG, m7GppG, AppA, dpCoA, and NADH were hydrolyzed by hNudt16 with a strong substrate preference for inosine or guanosine containing compounds. A new identified substrate for hNudt16, GppG, which binds the enzyme with an affinity comparable to that of IDP, suggests another potential regulatory role of this protein. Molecular docking of hNudt16-ligand binding inside the hNudt16 pocket revealed two binding modes for representative substrates. Nucleobase stabilization by Π stacking interactions with His24 has been associated with strong binding of hNudt16 substrates. View Full-Text
Keywords: hNudt16; nudix family; dinucleoside diphosphates; GppG; IDP; MST; DSF; SAXS hNudt16; nudix family; dinucleoside diphosphates; GppG; IDP; MST; DSF; SAXS
►▼ Show Figures 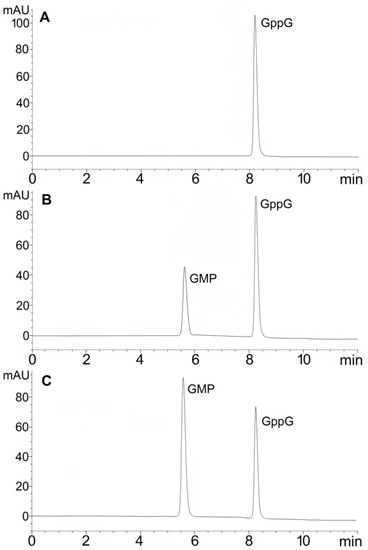