The search for methods of cognitive impairment treatment and prevention in neurological and neurodegenerative diseases is an urgent task of modern neurobiology. It is now known that various diseases, accompanied by dementia, exhibit a pronounced neuroinflammation. Considering the significant docosahexaenoic and eicosapentaenoic polyunsaturated fatty acids’ therapeutic potential, we decided to investigate and compare anti-inflammatory activity of their N-acylethanolamine derivatives. As a result, we found that both N-docosahexaenoylethanolamine (synaptamide) and N-eicosapentaenoylethanolamine (EPEA) prevents an LPS-mediated increase in the proinflammatory cytokines TNF-α and IL-6 production in the SIM-A9 microglia culture. In an in vivo experiment, synaptamide reversed an increase in LPS-mediated hippocampal TNF-α and IL-1β, but EPEA did not. However, both compounds contributed to the microglia polarization towards the M2-phenotype. Synaptamide, rather than EPEA, inhibited the Iba-1-positive microglia staining area increase. However, both synaptamide and EPEA prevented the LPS-mediated astrogliosis. A study of BDNF immunoreactivity showed that synaptamide, but not EPEA, reversed an LPS-mediated decrease in BDNF production. Despite the more pronounced anti-inflammatory activity of synaptamide, both compounds were effective in maintaining a normal level of hippocampal long-term potentiation in neuroinflammation. The results indicate a high therapeutic potential for both compounds. However, some tests have shown higher activity of synaptamide compared to EPEA. View Full-Text
Keywords: N-docosahexaenoylethanolamine; N-eicosapentaenoylethanolamine; synaptamide; EPEA; neuroinflammation; hippocampus; lipopolysaccharide (LPS); long-term potentiation N-docosahexaenoylethanolamine; N-eicosapentaenoylethanolamine; synaptamide; EPEA; neuroinflammation; hippocampus; lipopolysaccharide (LPS); long-term potentiation
►▼ Show Figures 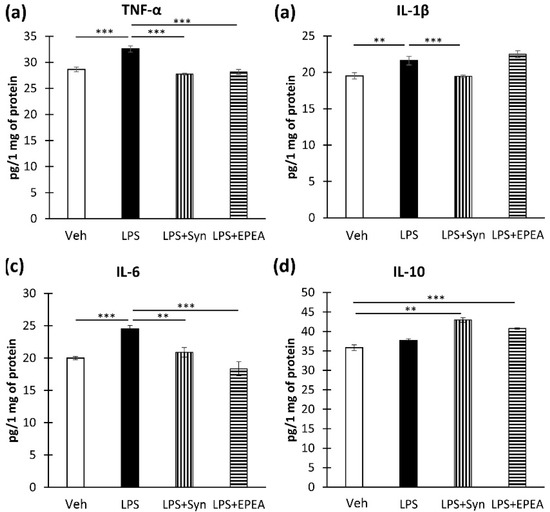