In recent decades, studies on the functional features of Se nanoparticles (SeNP) have gained great popularity due to their high biocompatibility, stability, and pronounced selectivity. A large number of works prove the anticarcinogenic effect of SeNP. In this work, the molecular mechanisms regulating the cytotoxic effects of SeNP, obtained by laser ablation, were studied by the example of four human cancer cell lines: A-172 (glioblastoma), Caco-2, (colorectal adenocarcinoma), DU-145 (prostate carcinoma), MCF-7 (breast adenocarcinoma). It was found that SeNP had different concentration-dependent effects on cancer cells of the four studied human lines. SeNP at concentrations of less than 1 μg/mL had no cytotoxic effect on the studied cancer cells, with the exception of the A-172 cell line, for which 0.5 μg/mL SeNP was the minimum concentration affecting its metabolic activity. It was shown that SeNP concentration-dependently caused cancer cell apoptosis, but not necrosis. In addition, it was found that SeNP enhanced the expression of pro-apoptotic genes in almost all cancer cell lines, with the exception of Caco-2 and activated various pathways of adaptive and pro-apoptotic signaling pathways of UPR. Different effects of SeNP on the expression of ER-resident selenoproteins and selenium-containing glutathione peroxidases and thioredoxin reductases, depending on the cell line, were established. In addition, SeNP triggered Ca2+ signals in all investigated cancer cell lines. Different sensitivity of cancer cell lines to SeNP can determine the induction of the process of apoptosis in them through regulation of the Ca2+ signaling system, mechanisms of ER stress, and activation of various expression patterns of genes encoding pro-apoptotic proteins. View Full-Text
Keywords: selenium nanoparticles; carcinogenesis; oxidative stress; ER stress selenium nanoparticles; carcinogenesis; oxidative stress; ER stress
►▼ Show Figures 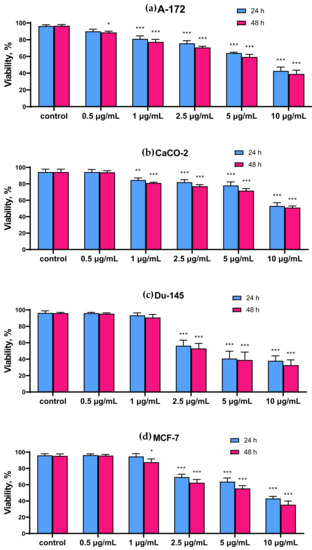