The Roles of Calmodulin and CaMKII in Cx36 Plasticity

Ouabain is a cardiac glycoside that has been described as a hormone, with interesting effects on epithelial physiology. We have shown previously that ouabain induces gap junctional intercellular communication (GJIC) in wild, sensitive cells (MDCK-S), but not in cells that have become insensitive (MDCK-I) by modifying their Na+-K+-ATPase. We have also demonstrated that prostaglandin E2 (PGE2) is able to induce increased GJIC by a mechanism other than ouabain, that does not depend on Na+-K+-ATPase. In this work we show, by dye transfer assays, that when MDCK-S and MDCK-I are randomly mixed, to form monolayers, the latter stablish GJIC, because of stimulation by a compound released to the extracellular media, by MDCK-S cells, after treatment with ouabain, as evidenced by the fact that monolayers of only MDCK-I cells, treated with a conditioned medium (CM) that is obtained after incubation of MDCK-S monolayers with ouabain, significantly increase their GJIC. The further finding that either (1) pre-treatment with COX-2 inhibitors or (2) addition to CM of antagonists of EP2 receptor abolish CM’s ability to induce GJIC in MDCK-I monolayers indicate that PGE2 is the GJIC-inducing compound. Therefore, these results indicate that, in addition to direct stimulation, mediated by Na+-K+-ATPase, ouabain enhances GJIC indirectly through the paracrine production of PGE2. View Full-Text
Keywords: ouabain; gap junctions; dye transfer; prostaglandin E2 ouabain; gap junctions; dye transfer; prostaglandin E2
►▼ Show Figures 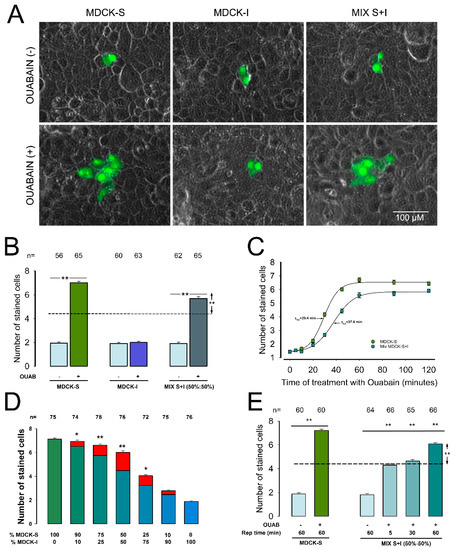