The Quantitative Proteome of the Cement and Adhesive Gland of the Pedunculate Barnacle, Pollicipes pollicipes

Adhesive secretion has a fundamental role in barnacles’ survival, keeping them in an adequate position on the substrate under a variety of hydrologic regimes. It arouses special interest for industrial applications, such as antifouling strategies, underwater industrial and surgical glues, and dental composites. This study was focused on the goose barnacle Pollicipes pollicipes adhesion system, a species that lives in the Eastern Atlantic strongly exposed intertidal rocky shores and cliffs. The protein composition of P. pollicipes cement multicomplex and cement gland was quantitatively studied using a label-free LC-MS high-throughput proteomic analysis, searched against a custom transcriptome-derived database. Overall, 11,755 peptide sequences were identified in the gland while 2880 peptide sequences were detected in the cement, clustered in 1616 and 1568 protein groups, respectively. The gland proteome was dominated by proteins of the muscle, cytoskeleton, and some uncharacterized proteins, while the cement was, for the first time, reported to be composed by nearly 50% of proteins that are not canonical cement proteins, mainly unannotated proteins, chemical cues, and protease inhibitors, among others. Bulk adhesive proteins accounted for one-third of the cement proteome, with CP52k being the most abundant. Some unannotated proteins highly expressed in the proteomes, as well as at the transcriptomic level, showed similar physicochemical properties to the known surface-coupling barnacle adhesive proteins while the function of the others remains to be discovered. New quantitative and qualitative clues are provided to understand the diversity and function of proteins in the cement of stalked barnacles, contributing to the whole adhesion model in Cirripedia. View Full-Text
Keywords: underwater adhesion; cement protein; Q-Exactive; proteogenomic; MaxQuant; iBAQ; protein expression underwater adhesion; cement protein; Q-Exactive; proteogenomic; MaxQuant; iBAQ; protein expression
►▼ Show Figures 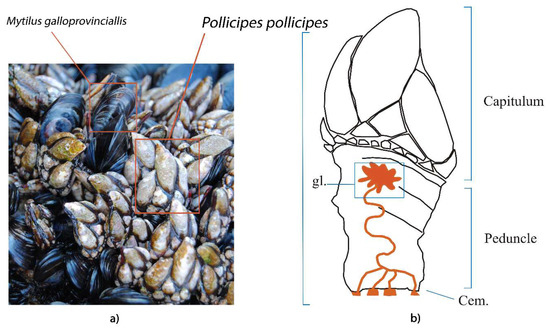