Perinatal hypoxic-ischemic encephalopathy (HIE) remains a major cause of morbidity and mortality. Moderate hypothermia (33.5 °C) is currently the sole established standard treatment. However, there are a large number of infants for whom this therapy is ineffective. This inspired global research to find neuroprotectants to potentiate the effect of moderate hypothermia. Here we examine erythropoietin (EPO) as a prominent candidate. Neonatal animal studies show that immediate, as well as delayed, treatment with EPO post-injury, can be neuroprotective and/or neurorestorative. The observed improvements of EPO therapy were generally not to the level of control uninjured animals, however. This suggested that combining EPO treatment with an adjunct therapeutic strategy should be researched. Treatment with EPO plus hypothermia led to less cerebral palsy in a non-human primate model of perinatal asphyxia, leading to clinical trials. A recent Phase II clinical trial on neonatal infants with HIE reported better 12-month motor outcomes for treatment with EPO plus hypothermia compared to hypothermia alone. Hence, the effectiveness of combined treatment with moderate hypothermia and EPO for neonatal HIE currently looks promising. The outcomes of two current clinical trials on neurological outcomes at 18–24 months-of-age, and at older ages, are now required. Further research on the optimal dose, onset, and duration of treatment with EPO, and critical consideration of the effect of injury severity and of gender, are also required. View Full-Text
Keywords: erythropoietin; moderate hypothermia; perinatal hypoxic-ischemic encephalopathy; neonatal hypoxia-ischemia; anemia of prematurity erythropoietin; moderate hypothermia; perinatal hypoxic-ischemic encephalopathy; neonatal hypoxia-ischemia; anemia of prematurity
►▼ Show Figures 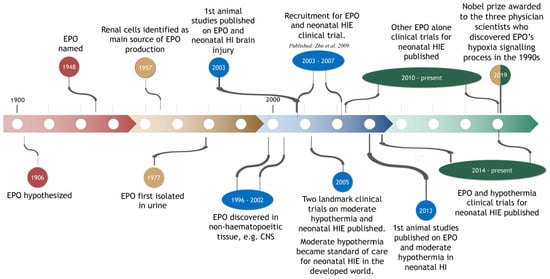