A T-maze test is an experimental approach that is used in congenital research. However, the food reward-based protocol for the T-maze test in fish has low efficiency and a long training period. The aim of this study is to facilitate the T-maze conditions by using a combination of the principles of passive avoidance and a spatial memory test. In our modified T-maze settings, electric shock punishment (1–2 V, 0.3–0.5 mA) is given at the left arm, with a green cue at the right arm. Also, the depth of both arms of the T-maze was increased. The parameters measured in our T-maze design were latency, freezing time, and time spent in different areas of the T-maze. We validated the utility of our modified T-maze protocol by showing the consistent finding of memory impairment in ZnCl2−treated fish, which has been previously detected with the passive avoidance test. In addition, we also tested the spatial memory performance of leptin a (lepa) mutants which displayed an obesity phenotype. The results showed that although the learning and memory performance for lepa KO fish were similar to control fish, they displayed a higher freezing behavior during the training phase. In conclusion, we have established a modified T-maze protocol that can be used to evaluate the anxiety, learning, and memory capacity of adult zebrafish within three days, for the first time. View Full-Text
Keywords: passive avoidance; ZnCl2; spatial memory; T-maze; leptin a; zebrafish passive avoidance; ZnCl2; spatial memory; T-maze; leptin a; zebrafish
►▼ Show Figures 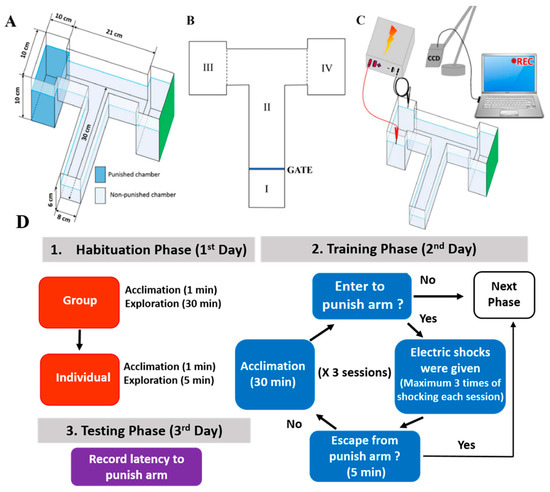