The Vitamin A and D Exposure of Cells Affects the Intracellular Uptake of Aluminum Nanomaterials and Its Agglomeration Behavior: A Chemo-Analytic Investigation
Previous Article in Journal

Clostridioides difficile, formerly known as Clostridium difficile, is a spore-forming bacterium considered as the most common cause of nosocomial infections in developed countries. The spore of C. difficile is involved in the transmission of the pathogen and in its first interaction with the host; therefore, a therapeutic approach able to control C. difficile spores would improve the clearance of the infection. The C-terminal (CTD) end of BclA2, a spore surface protein of C. difficile responsible of the interaction with the host intestinal cells, was selected as a putative mucosal antigen. The BclA2 fragment, BclA2CTD, was purified and used to nasally immunize mice both as a free protein and after adsorption to the spore of Bacillus subtilis, a well-established mucosal delivery vehicle. While the adsorption to spores increased the in vitro stability of BclA2CTD, in vivo both free and spore-adsorbed BclA2CTD were able to induce a similar, specific humoral immune response in a murine model. Although in the experimental conditions utilized the immune response was not protective, the induction of specific IgG indicates that free or spore-bound BclA2CTD could act as a putative mucosal antigen targeting C. difficile spores. View Full-Text
Keywords: spore adsorption; spore antigens; Bacillus subtilis; spore surface display; mucosal vaccination spore adsorption; spore antigens; Bacillus subtilis; spore surface display; mucosal vaccination
►▼ Show Figures 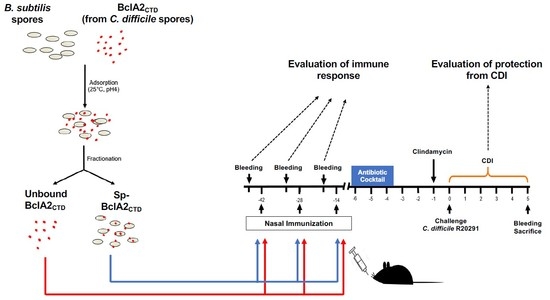