Mucopolysaccharidosis type II (MPS II, Hunter syndrome) was first described by Dr. Charles Hunter in 1917. Since then, about one hundred years have passed and Hunter syndrome, although at first neglected for a few decades and afterwards mistaken for a long time for the similar disorder Hurler syndrome, has been clearly distinguished as a specific disease since 1978, when the distinct genetic causes of the two disorders were finally identified. MPS II is a rare genetic disorder, recently described as presenting an incidence rate ranging from 0.38 to 1.09 per 100,000 live male births, and it is the only X-linked-inherited mucopolysaccharidosis. The complex disease is due to a deficit of the lysosomal hydrolase iduronate 2-sulphatase, which is a crucial enzyme in the stepwise degradation of heparan and dermatan sulphate. This contributes to a heavy clinical phenotype involving most organ-systems, including the brain, in at least two-thirds of cases. In this review, we will summarize the history of the disease during this century through clinical and laboratory evaluations that allowed its definition, its correct diagnosis, a partial comprehension of its pathogenesis, and the proposition of therapeutic protocols. We will also highlight the main open issues related to the possible inclusion of MPS II in newborn screenings, the comprehension of brain pathogenesis, and treatment of the neurological compartment. View Full-Text
Keywords: Mucopolysaccharidosis type II; Hunter syndrome; lysosomal storage disorders; X-linked trait; glycosaminoglycans; diagnosis; therapy; pathogenesis; animal model Mucopolysaccharidosis type II; Hunter syndrome; lysosomal storage disorders; X-linked trait; glycosaminoglycans; diagnosis; therapy; pathogenesis; animal model
►▼ Show Figures 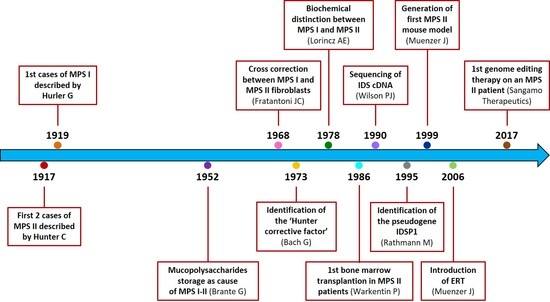