Taste perception can provide important information about foods. In mammals, bitter taste in the oral cavity is detected by T2Rs, which are heterotrimeric G-protein-coupled receptors expressed on the surface of the tongue [1]. When bitter compounds bind to receptors, information is transmitted to the brain, enabling the recognition of bitter taste.
Non-human primates such as macaques and marmosets, which belong to the Old World and New World monkey families, respectively, are frequently used as models for humans in various types of research. Previous studies have shown that taste-related proteins (e.g., gustducin, TRPM5, and some T2Rs) are selectively expressed in the cecum of common marmosets [2,3]. These observations suggest that T2R expression patterns vary among species, even among primates. In addition, the functional properties of T2Rs are different even among orthologous species. For example, T2R38 in humans [4] and macaques [5] is responsive to phenylthiocarbamide (PTC) but the mouse orthologue T2R138 is not [6]. In humans, a polymorphism in the TAS2R38 gives rise to the difference in response to PTC between the PAV (taster) and AVI (non-taster) genotypes (phenotypes) [4]. Also, in Japanese macaques, there is a polymorphism in the TAS2R38 gene in which a mutation in the nucleotide position 2 of the starting methionine results in the non-taster phenotype [5].
A previous study using mouse and human organs suggested that T2R expression patterns vary among cell types. For example, Tas2R131 is expressed in Paneth cells and goblet cells in the mouse small and large intestines, respectively [7], T2R138 is expressed in the enteroendocrine cells of the mouse colon [8], and T2R38 is expressed in the enteroendocrine cells of the human colon [9]. To understand the general mechanism by which T2R expression is regulated in humans and rodents, it is necessary to use an experimental model that is intermediate between these species. In this study, we measured TAS2R mRNA levels and corresponding protein expression levels in rhesus macaques. This non-human primate could be a suitable model for studying human taste perception by focusing in particular on the TAS2R38 gene and T2R38 protein for which appropriate antibodies are readily available.

We first used RNAseq to screen for TAS2R mRNAs in various organs of rhesus macaques, which have orthologues to human TAS2Rs (Table S1 and Figure 1).
We found that some TAS2Rs are highly expressed in the rhesus macaque gut. In particular, TAS2R1, 3, 4, 5, and 46 were expressed in nearly all gut samples, while TAS2R14, 19, 20, and 38 were expressed in only certain tissues. RNAseq failed to detect other TAS2Rs. Of note, TAS2R38 expression in the intestine is related to the risk of intestinal cancers associated with the taster/non-taster phenotype [10]. To confirm the expression pattern of TAS2R38 in the intestine, we performed RT-qPCR analyses of TAS2R38, GNAT3 (gustducin), and TRPM5 (Tables S2, S3 and Figure 2). TAS2R38 and GNAT3 were both highly expressed in the circumvallate papillae (CV), but TAS2R38 was moderately expressed in the ileum and duodenum as compared with GNAT3 [3]. Meanwhile, TRPM5 was highly expressed in the upper digestive system. These results revealed an expression pattern similar to that in human tissues.

Next, we evaluated tissue localization of TAS2R38 by RNAscope and immunohistochemistry. RNAscope detects mRNAs by in situ hybridization. As previously described, RNAscope detected TAS2R38 and TRPM5 in taste receptor cells (Figure 3A). We detected weak positive signals in gut tissues (Figure 3B–D).

We evaluated T2R38 signals by immunohistochemistry (Figure S1). Using T2R38 antibodies, we detected signals in the CV, and these signals overlapped with GNAT3 signals (Figure S1B,C). To confirm antibody reactivity, we used HEK293 cells transiently transfected with rhesus macaque TAS2R38 cDNA. Transfected cells were then stained using each antibody (Table S4). As shown in Figure S2, T2R38 protein was detected with response to PTC. We confirmed that each antibody could specifically detect T2R38 protein in rhesus macaques. We further examined T2R expression in cells of the intestinal villi in the duodenum that were positive for T2R38. There are several types of cells in the intestinal epithelium and expression of T2Rs is limited to specific types: Paneth cells in the small intestine, [7] goblet cells in the large intestine [11], enteroendocrine cells [9], and tuft cells [12]. T2R38 antibody immunoreactivity was observed in both enteroendocrine cells and goblet cells marked by chromogranin A (arrowheads in Figure 4A–C) [13] and mucin2 (arrowheads in Figure 4D–F) [14], respectively. We also detected co-expression of GNAT3 and T2R38 (arrowheads in Figure 4J-L), making GNAT3-dependent signal transduction in these cells possible. We have previously observed that rhesus macaque T2R38 can activate G-protein with the C-terminus of GNAT3 (G16/gust44) [15] in a heterologous expression system [5], so this may also be possible in intestinal cells. Several DCLK1-positive tuft cells were negative for T2R38 (arrows in Figure 4H,I); however, some cells were double-stained by T2R38 and DCLK1 antibodies (Arrowheads in Figure 4G-I). We did not obtain evidence of T2R38 expression in Paneth cells, possibly due to the functionality of the Paneth cell marker antibody. Similar expression profiles have been observed in the ileum (Figure S3) and colon (Figure S4) of rhesus macaques, suggesting differences from mice. In mice, the Tas2R131 promoter functioned in Paneth cells in the small intestine [7] and in goblet cells in the large intestine [11]. These results indicate that bitter taste receptors, or at least T2R38, are expressed in the intestines of rhesus macaques, as in humans, and have similar functionality. Accordingly, rhesus macaques are suitable models for human research, owing to these similarities in receptivity and expression profiles, at least for T2R38 receptors.

We observed the expression of TAS2R38 with gustducin in enteroendocrine cells and goblet cells in the rhesus macaque intestine. These results are basically consistent with those of previous studies in mice and humans; mouse T2R131 is expressed in Paneth cells in the small intestine and in goblet cells in the large intestine [7,11]. T2R138, an orthologue of primate T2R38, is expressed in the enteroendocrine cells of the mouse ileum and colon [8]. T2R38 is also expressed in the enteroendocrine cells of the human colon [9]. We found that T2R38 is expressed in DCLK1-positive cells in the intestine. DCLK1 is a marker for tufted cells (reviewed in [17]). In mice, the expression of T2Rs in tuft cells is associated with parasitic infection [12]. T2Rs include T2R138, consistent with our data in rhesus macaques. Therefore, the basic expression patterns are similar to those in other species, although it is necessary to evaluate the expression patterns of each type of T2R. Our results indicate that rhesus macaques would be an appropriate model for analyses of specific phenotypes in the gut.

Total RNA was extracted from tissues using an RNeasy Plus Mini Kit (Qiagen GmbH, Hilden, Germany) and its quality was confirmed using a Bioanalyzer (Agilent Technologies). Genomic DNA removal and reverse transcription were performed using the PrimeScript RT Reagent Kit with gDNA Eraser (Takara, Kyoto, Japan) for 1 μg of total RNA with and without enzymes. RNAseq was performed at The Research Institute for Microbial Diseases, Osaka University, using a TruSeq Stranded mRNA Sample Prep Kit and HiSeq2500 as the sequencer. Analysis was performed by GeneBay to confirm the annotation of TAS2Rs of RheMac2, as shown in Table S1. Real-time PCR was performed using the StepOne Plus system (Applied Biosystems, Foster City, CA, USA) with Thunderbird SYBR qPCR Mix (Toyobo, Tokyo, Japan) and the primers listed in Supplemental Table S2. Standard conditions (95 °C for 30 s, 50 cycles of 95 °C for 15 s, and 60 °C for 45 s) were applied and analyses were performed in triplicate. Quantities of mRNA for TAS2R38, GNAT3 (gustducin), and TRPM5 were determined relative to the quantities of the internal markers GAPDH and β-actin [18,19]. Amplicons were also analyzed by 2% agarose gel electrophoresis and the presence of single bands was confirmed.

RNAscope experiments were conducted according to the manufacturer’s instructions (Advanced Cell Diagnostics, Newark, CA). For the manual single-plex RNAscope assays, tissue sections were baked for 1 h at 60 °C. Deparaffinized treatment was performed at room temperature. Target retrieval was performed for 15 min at 100 °C, followed by protease treatment for 30 min at 40 °C. Probes were then hybridized for 2 h at 40 °C. RNAscope amplification was performed by DAB chromogenic detection. Images were acquired by all-in-one microscopy (BZ-X710; Keyence, Osaka, Japan).

HEK293 cells were transiently transfected using Lipofectamine 2000 (Invitrogen, Carlsbad, CA, USA) according to the manufacturer’s protocol with cDNA constructs coding for the rhesus macaque bitter taste receptor TAS2R38 [5]. The coding regions of the receptors were fused N-terminally to the sst epitope, and C-terminally to a 1D4-tag. An empty pEAK10 vector was used as a negative control. Next, transfected cells were seeded into poly-D-lysine coated chambers and incubated overnight at 37 °C in 5% CO2 [20]. Then, cells were washed with PBS-T, cooled on ice for 30 min, and incubated with biotin-conjugated concanavalin A (5 μg/mL, Sigma) for 1 h at 4 °C. After washing with PBS-T, the cells were fixed by treatment with methanol/acetone (1:1, v/v) for 2 min. Cells were washed again with PBS-T and incubated for 1 h with 10% normal horse serum. Primary antibodies were added at several concentrations and incubated overnight at 4 °C (Table S4). After washing with PBS-T and blocking with 10% normal horse serum, cells were incubated with the secondary antibodies streptavidin and AMCA conjugate for 1 h at room temperature (Table S4). Finally, cells were washed with PBS-T and fluorescence was measured by fluorescence microscopy with channels for DAPI (blue), Cy3 (red), and FITC (green) (LCM-510; Carl Zeiss Microscopy GmbH). Calcium imaging was performed to check the response of T2R38 according to the methods previously reported [5].

This research was funded by Grants-in-Aid from the Japan Society for the Promotion of Science (KAKENHI 19K21586, 18H04005,16H01338, 15H02421, 15H05242, and 25257409 to HI), and research grants from the Kobayashi International Scholarship Foundation, the Terumo Foundation for Life Sciences and Arts, the Umami Manufacturers Association of Japan, and the JSPS and DG-RSTHE or NSF under the Japan-Indonesia or Korea Research Cooperative Program and Core-to-Core Program to H.I.

The authors would like to thank Takashi Ueda, Yoshiro Ishimaru, Takumi Misaka, and Keiko Abe for providing the Ga16/gust44 and pEAK10 vectors, and Hiroaki Matsunami for providing HEK293T cells. We also wish to express our gratitude to the members of the molecular biology section of the Primate Research Institute, Kyoto University. This work was supported by the Cooperative Research Program of the Primate Research Institute, Kyoto University (H31-B17). 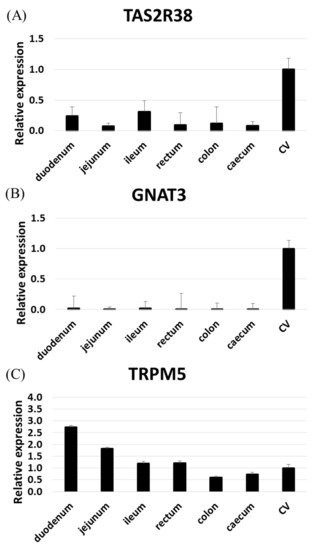 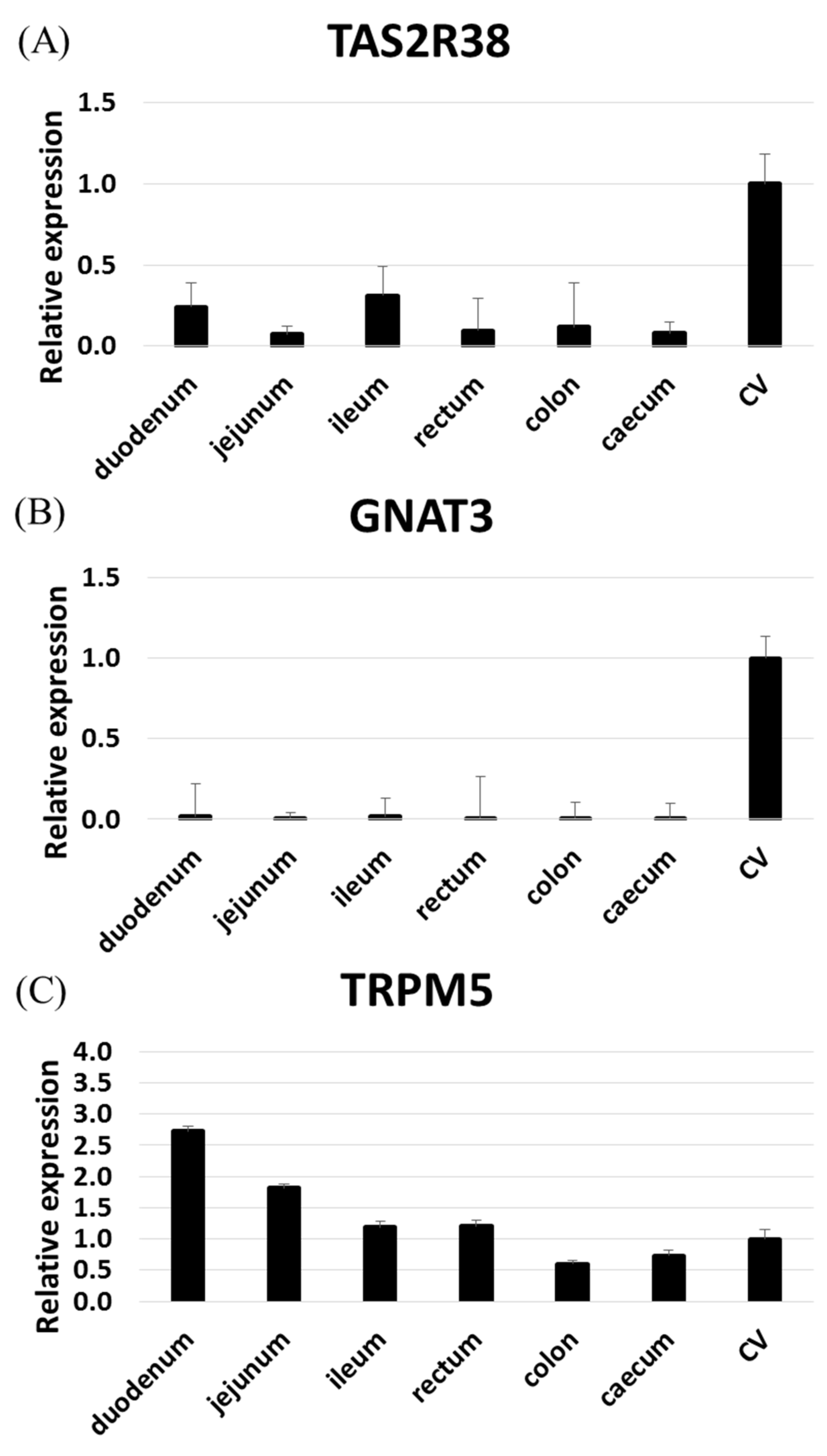 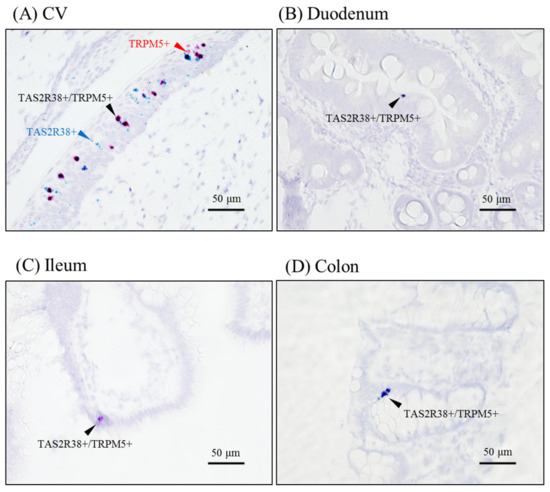 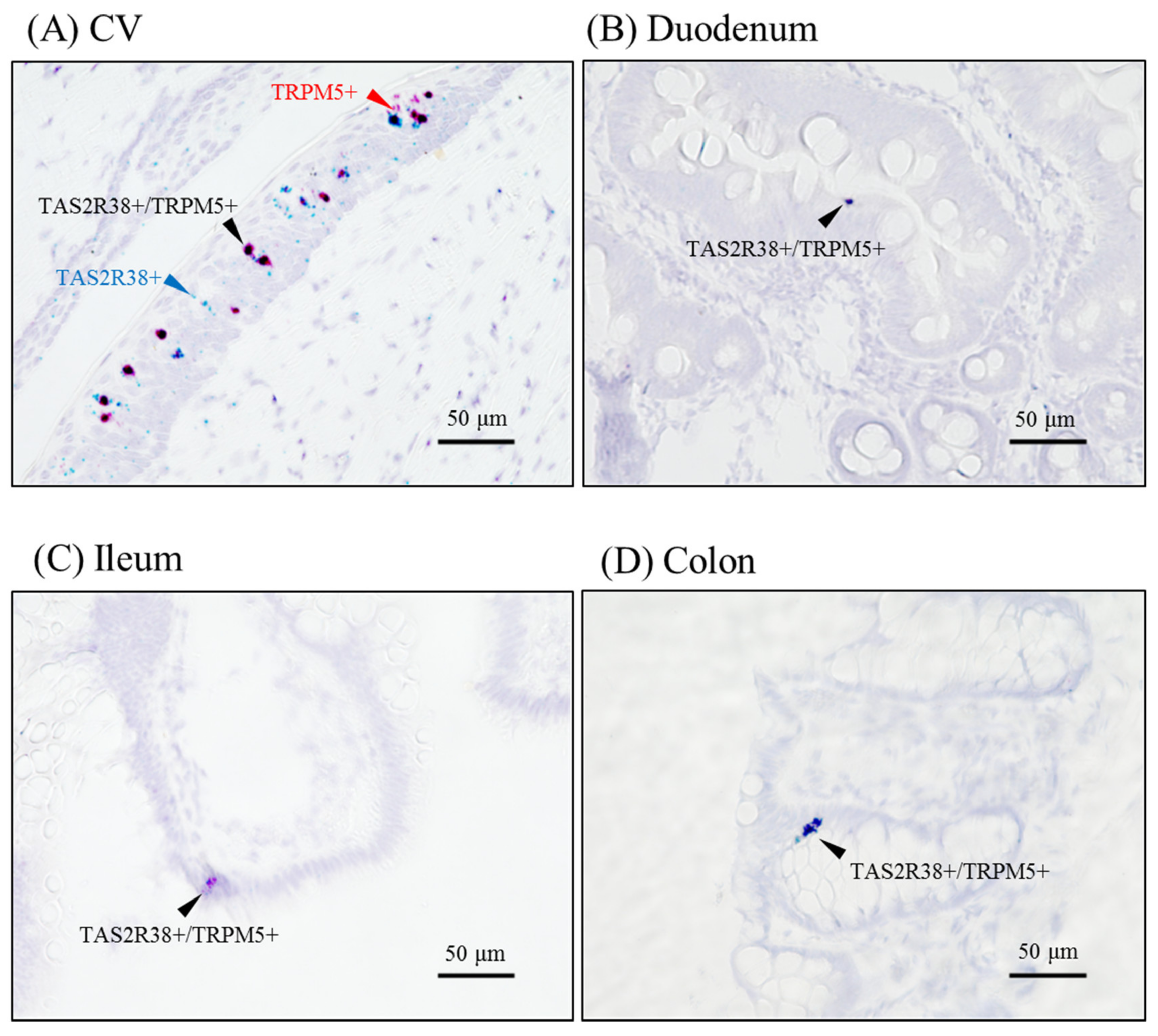 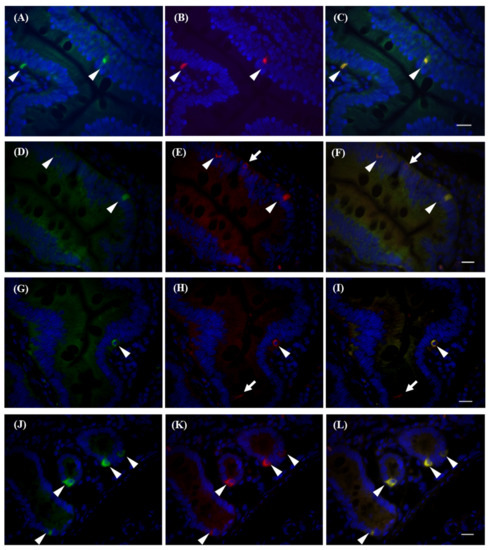