Proteomic and Genomic Changes in Tau Protein, Which Are Associated with Alzheimer’s Disease after Ischemia-Reperfusion Brain Injury
Next Article in Special Issue

Alpha-fetoprotein (AFP) is a major embryo- and tumor-associated protein capable of binding and transporting a variety of hydrophobic ligands, including estrogens. AFP has been shown to inhibit estrogen receptor (ER)-positive tumor growth, which can be attributed to its estrogen-binding ability. Despite AFP having long been investigated, its three-dimensional (3D) structure has not been experimentally resolved and molecular mechanisms underlying AFP–ligand interaction remains obscure. In our study, we constructed a homology-based 3D model of human AFP (HAFP) with the purpose of molecular docking of ERα ligands, three agonists (17β-estradiol, estrone and diethylstilbestrol), and three antagonists (tamoxifen, afimoxifene and endoxifen) into the obtained structure. Based on the ligand-docked scoring functions, we identified three putative estrogen- and antiestrogen-binding sites with different ligand binding affinities. Two high-affinity binding sites were located (i) in a tunnel formed within HAFP subdomains IB and IIA and (ii) on the opposite side of the molecule in a groove originating from a cavity formed between domains I and III, while (iii) the third low-affinity binding site was found at the bottom of the cavity. Here, 100 ns molecular dynamics (MD) simulation allowed us to study their geometries and showed that HAFP–estrogen interactions were caused by van der Waals forces, while both hydrophobic and electrostatic interactions were almost equally involved in HAFP–antiestrogen binding. Molecular mechanics/Generalized Born surface area (MM/GBSA) rescoring method exploited for estimation of binding free energies (ΔGbind) showed that antiestrogens have higher affinities to HAFP as compared to estrogens. We performed in silico point substitutions of amino acid residues to confirm their roles in HAFP–ligand interactions and showed that Thr132, Leu138, His170, Phe172, Ser217, Gln221, His266, His316, Lys453, and Asp478 residues, along with two disulfide bonds (Cys224–Cys270 and Cys269–Cys277), have key roles in both HAFP–estrogen and HAFP–antiestrogen binding. Data obtained in our study contribute to understanding mechanisms underlying protein–ligand interactions and anticancer therapy strategies based on ERα-binding ligands. View Full-Text
Keywords: alpha-fetoprotein; estrogens; selective estrogen receptor modulators; homology-based modeling; molecular docking; protein–ligand interaction; amino acid substitutions alpha-fetoprotein; estrogens; selective estrogen receptor modulators; homology-based modeling; molecular docking; protein–ligand interaction; amino acid substitutions
►▼ Show Figures 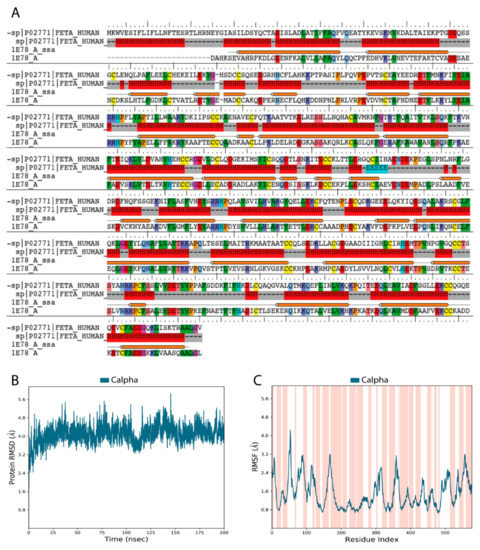