Revisiting the Interaction of Melittin with Phospholipid Bilayers: The Effects of Concentration and Ionic Strength

Metastasis is considered a major burden in cancer, being responsible for more than 90% of cancer-related deaths. Tumor angiogenesis is one of the main processes that lead to tumor metastasis. Penfluridol is a classic and commonly used antipsychotic drug, which has a great ability to cross the blood–brain barrier. Recent studies have revealed that penfluridol has significant anti-cancer activity in diverse tumors, such as metastatic breast cancer and glioblastoma. Here, we aim to identify the effect of low doses of penfluridol on tumor microenvironment and compare it with its effect on tumor cells. Although low concentration of penfluridol was not toxic for endothelial cells, it blocked angiogenesis in vitro and in vivo. In vitro, penfluridol inhibited VEGF-induced primary endothelial cell migration and tube formation, and in vivo, it blocked VEGF- and FGF-induced angiogenesis in the matrigel plug assay. VEGF-induced VEGFR2 phosphorylation and the downstream p38 and ERK signaling pathways were not affected in endothelial cells, although VEGF-induced Src and Akt activation were abrogated by penfluridol treatment. When cancer cells were treated with the same low concentration of penfluridol, basal Src activation levels were mildly impaired, thus impacting their cell migration and wound healing efficiency. The potential of cancer-induced paracrine effect on endothelial cells was explored, although that did not seem to be a player for angiogenesis. Overall, our data demonstrates that low penfluridol levels, similar to the ones clinically used for anti-psychotic conditions, suppress angiogenic efficiency in the tumor microenvironment. View Full-Text
Keywords: penfluridol; angiogenesis; breast cancer penfluridol; angiogenesis; breast cancer
►▼ Show Figures 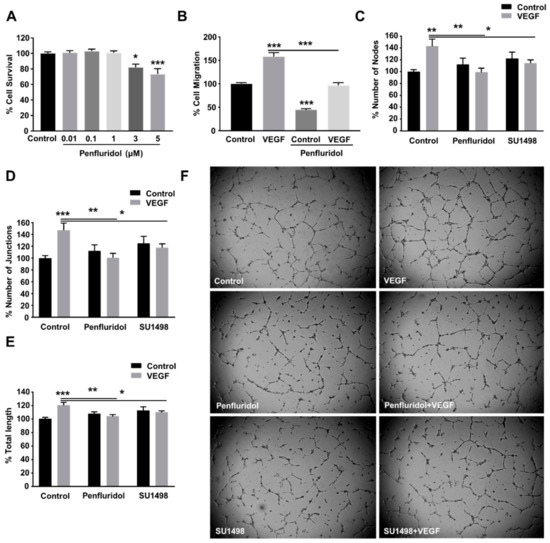