It is established that cancer cachexia causes limb muscle atrophy and is strongly associated with morbidity and mortality; less is known about how the development of cachexia impacts the diaphragm. The purpose of this study was to investigate cellular signaling mechanisms related to mitochondrial function, reactive oxygen species (ROS) production, and protein synthesis during the development of cancer cachexia. C57BL/J6 mice developed Lewis Lung Carcinoma for either 0 weeks (Control), 1 week, 2 weeks, 3 weeks, or 4 weeks. At designated time points, diaphragms were harvested and analyzed. Mitochondrial respiratory control ratio was ~50% lower in experimental groups, which was significant by 2 weeks of cancer development, with no difference in mitochondrial content markers COXIV or VDAC. Compared to the controls, ROS was 4-fold elevated in 2-week animals but then was not different at later time points. Only one antioxidant protein, GPX3, was altered by cancer development (~70% lower in experimental groups). Protein synthesis, measured by a fractional synthesis rate, appeared to become progressively lower with the cancer duration, but the mean difference was not significant. The development and progression of cancer cachexia induces marked alterations to mitochondrial function and ROS production in the diaphragm and may contribute to increased cachexia-associated morbidity and mortality. View Full-Text
Keywords: protein synthesis; protein degradation; muscle atrophy; mitochondrial function; mTOR; oxidative stress; FOXO protein synthesis; protein degradation; muscle atrophy; mitochondrial function; mTOR; oxidative stress; FOXO
►▼ Show Figures 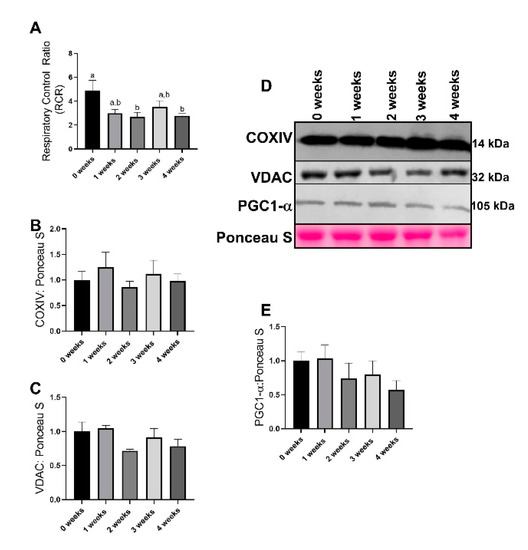