The natural flavonoid chrysin possesses antiproliferative activity against various types of cancers, including hepatocellular carcinoma (HCC), which is a common malignancy. However, the exact mechanism of chrysin antiproliferative activity remains unclear. This research was executed to explore the impact of chrysin on glypican-3 (GPC3)/sulfatase-2 (SULF2) axis and lncRNA-AF085935 expression in HCC using HepG2 cells. Cisplatin (20, 50, 100 μg/mL), chrysin (15, 30, and 60 μg/mL) and the combination of 50 μg/mL cisplatin with different concentrations of chrysin were applied for 24/48 h. Cell viability was determined by MTT assay. Protein levels of GPC3 and SULF2 were measured by ELISA at 24/48 h. GPC3 immunoreactivity was detected by immunocytochemistry. Moreover, GPC3 and SULF2 mRNA expressions in addition to lncRNA-AF085935 expression were assessed by qPCR at 48 h. The GPC3 protein, immunostaining and mRNA levels, SULF2 protein and mRNA levels, as well as lncRNA-AF085935 expression, were decreased significantly with cisplatin and chrysin alone when compared with the control untreated HepG2 cells. However, the combination treatment exhibited a better chemopreventive effect in a dose- and time-dependent manner. This study demonstrated, for the first time, the antiproliferative activity of chrysin against HCC through the suppression of the GPC3/SULF2 axis along with the downregulation of lncRNA-AF085935 expression. Synergistic effect of chrysin with cisplatin could potentiate their antiproliferative action in a dose- and time-dependent manner.
Keywords: hepatocellular carcinoma; Chrysin; GPC3; SULF2; lncRNA-AF085935 hepatocellular carcinoma; Chrysin; GPC3; SULF2; lncRNA-AF085935

Liver cancer is a serious health problem and is considered the world’s main cause of cancer related death. The most prevalent type is known as hepatocellular carcinoma (HCC) [1]. Retarding the progression of HCC is the target plan for physicians to improve a patient’s prognosis [2]. Although physicians have tried their best to treat HCC through surgical operations, either by liver resection or liver transplantation, missing early diagnosis led to poor prognosis [1,3]. Unfortunately, most HCC patients are diagnosed at their advanced stages with systemic chemotherapies being the only treatment option [4].
Currently, the chemotherapeutic agents utilized for HCC are associated with deleterious adverse effects on their use [5]. Therefore, the use of natural products, either alone or in combination with conventional chemotherapy, is gaining great interest. Indeed, various studies applied natural products as sole treatment or combination regimens with common chemotherapy for the purpose of HCC treatment and/or reduction of the cytotoxicity of chemotherapy [6,7,8]. Cisplatin is one of the most effective and frequently used chemotherapeutic drugs for the management of HCC, with high response rates and favorable long-term outcomes [9]. Currently, multiple studies are focusing on developing novel combination regimens to potentiate cisplatin antiproliferative efficacy and facilitate its clinical application [10,11].
The natural polyphenolic compounds that occur in plants were known as flavonoids and possess various beneficial pharmacological actions including anti-inflammatory, antiapoptotic, antioxidants, and anticancer activities [12,13]. One of these natural flavonoids is chrysin, with the chemical structure of 5,7-dihydroxyflavone, which is present in propolis and honey [14]. The chrysin antitumor activity was documented in various types of human cancer cell lines, including gastric [15], breast [16], colorectal [17], and prostate [18] cancer cells due to its ability to induce cell apoptosis and cell cycle arrest [19]. Interestingly, previous studies showed the antitumor potential of chrysin against HCC through p53/Bcl-2/caspase-9 pathway activation [20] and targeting hexokinase-2 [12]. Notably, chrysin has been reported to alleviate cisplatin-induced liver [21] and colon [22] toxicity, highlighting its beneficial use as combinational therapy with cisplatin. However, the exact mechanism of chrysin anti-proliferative effect remains unidentified.
On the other hand, remodeling of the extracellular matrix (ECM) is significantly involved in the control of HCC differentiation, proliferation, and metastasis [23]. Heparan sulfate proteoglycans (HSPGs) are ECM cell surface macromolecules comprised of a core protein attached to chains of heparan sulfate glycosaminoglycan (HS GAG). Glypicans (GPCs) are cell surface HSPGs and are connected to the plasma membrane by glycosylphosphatidylinositol (GPI) link [24]. Glypican-3 (GPC3) acts as a storage site for some ligands through the HS side chain. GPC3 enables ligand/receptor interaction to stimulate various signaling pathways incorporated in the progression of the HCC [3].
The extracellular enzyme sulfatase 2 (SULF2) is involved in the tumorigenesis and progression of several carcinomas through alteration of sulfation on HSPGs. SULF2 is characterized as having a 6-O-desulftase activity, which removes the 6-O-sulfate from HSPGs, minimizing the affinity of HSPGs to sequester signaling ligands, leading to their release from the HSPGs storage sites and driving them accessible for activating various pathways [25,26].
Additionally, it was reported that GPC3 and SULF2 overexpression were associated with HCC growth [3,27,28]. GPC3 is currently considered as a trustable indicator for the HCC earlier diagnosis and prognosis than serum alpha-fetoprotein [3,27]. Moreover, SULF2 was reported to be a crucial indicator for the prognosis of HCC [28]. Beside their diagnostic value, a large body of evidence reported that targeting GPC3 and SULF2 is a promising therapeutic approach for HCC [29,30].
Likewise, long noncoding RNA (lncRNA), with >200 nucleotides length, have been recently emerged as gene expression regulators in cancer cells, including HCC [31]. Several lncRNAs are dysregulated in liver cancer cells and have been linked to crucial signaling pathways of tumorigenesis. These dysregulated lncRNAs are strongly suggested as novel diagnostic biomarkers and/or therapeutic targets for HCC [32]. Specifically, the lncRNA-AF085935 was highly expressed in HCC and could be used as a vital biomarker for HCC [33]. This study was carried out to discover a new insight of the antiproliferative action of chrysin alone or with its concurrent treatment with cisplatin against HCC through the impact on the GPC3/SULF2 axis in addition to lncRNA-AF085935 expression.

The MTT assay was utilized to evaluate the impact of chrysin and cisplatin (alone or in combination) on HepG2 cells proliferation (Figure 1). Cisplatin (20, 50, 100 µg/mL) (A) and chrysin (15, 30, 60 µg/mL) (B) sole treatment for 24 and 48 h markedly reduced the survival of HepG2 cells in a concentration-dependent manner when compared with the control untreated HepG2 cells, (p < 0.05). The combination of chrysin (15–60 µg/mL) with cisplatin 50 µg/mL treatment for 24 and 48 h significantly reduced the HepG2 cells survival when compared with chrysin (15–60 µg/mL) alone or cisplatin 50 µg/mL for 24 and 48 h, respectively (p < 0.05, Figure 1B). Moreover, our results documented that the significant reduction in cell survival was obtained in a time-dependent way in which more reduction in cell survival was determined after 48 h treatment compared to 24 h treatment (p < 0.05, Figure 1).

Next, we examined if the antiproliferative action of chrysin and cisplatin on HepG2 cells involved the lncRNA-AF085935. As shown in Figure 7, HepG2 cells were treated with increasing concentrations of cisplatin (20, 50, 100 µg/mL) (A) or chrysin (15, 30, 60 µg/mL) (B) for 48 h. Except for chrysin 15 µg/mL, chrysin or cisplatin single treatment significantly reduced the lncRNA-AF085935 expression in a dose-dependent manner compared with the control untreated HepG2 cells. Furthermore, lncRNA-AF085935 expression was significantly downregulated by both chrysin (15–60 µg/mL) and cisplatin 50 μg/mL as a combination treatment when compared with chrysin (15–60 µg/mL) alone or cisplatin 50 µg/mL (p < 0.05, Figure 7B).

Chrysin was provided as a 5 gm faint yellow powder from Sichuan Benepure Pharmaceutical Co., Ltd., Chengdu, China, while cisplatin was obtained as a 50 mL vial (1mg/mL) from Hospira, Warwickshire, UK.

The human hepatocellular carcinoma (HepG2) cell line was provided from the American Type Culture Collection (ATCC, Minnesota, USA) and grown using Roswell Park Memorial Institute (RPMI) 1640 culture media (Lonza Bioscience, Alpharetta, GA, USA), adding 10% fetal bovine serum, 2 mM glutamine, in addition to antibiotics of 1% penicillin/ streptomycin at 37 °C in a CO2 incubator. Table 1 illustrates the cell treatment protocol in which the concentrations of cisplatin and chrysin used for this study were similar to those reported before in previous studies [7,12,20,55].

The MTT cell proliferation assay (TACSTM MTT, Trevigen®, Hagerman CT, Gaithersburg) was used for assessing cell viability according to the manufacturer’s instructions. HepG2 cells (1 × 103) were placed in 96 well microplate 24 h before MTT assay. A 50 µL of serum-free media was added to cells and 10 µL of MTT solution into each well. The plate was incubated at 37 °C for 3 h. After incubation, 100 µL of detergent solution (MTT formazan) was added into each well, and then the plate was covered and incubated overnight at 37 °C. An ELISA plate reader was used to measure the color absorbance at optical density (O.D.) 590 nm, duplicate readings were taken, and then averaged for each sample. The amount of absorbance was proportional to cell number.

4.4. Immunocytochemistry (ICC) for the Detection of GPC3 Protein Expression

Immunocytochemistry technique was used to detect the immunopositive cells for GPC3 in the HepG2 liver cancer cell line. The cells were seeded on a 96 well plate with glass bottom followed by fixation of the cells in 100% methanol/10min at room temperature in addition to permeabilization with 0.25–0.5% Triton X-100 in PBS/10 min. After that, incubation for 24 h with GPC3 primary antibody (1:500, Abcam, Cambridge, UK) was performed. Washing after the immunostaining step was applied and secondary antibody anti-rabbit IgG (1:1000) was added for 1 h. Finally, the percentage number of GPC3 immuno-expression cells was quantified in five images/each group using the Image-Pro Plus program.

Cells at 1 × 107 cells/mL were suspended and lysed in cell lysis buffer, and then incubation with gentle agitation was done at room temperature for up to 1 h. In cell lysate, total protein concentration was measured by the Bradford method using the Bradford protein assay kit provided by Bio Basic Inc., Ontario, Canada, according to manual instructions. The GPC3 and SULF2 protein concentration levels were assessed in cell lysate as pg/mg cell protein by using human GPC3/SULF2 ELISA kits provided from Creative Diagnostics, Shirly, NY, USA and Abbkine Scientific Co., Ltd., Wuhan, China, respectively, according to manual instructions.

From cells of all groups, the total RNA was extracted with Direct-zolTM RNA Miniprep Plus kits (Zymo Research Corp., CA, USA), then its quantity and quality were examined by Beckman dual spectrophotometer. The SuperScript IV One-Step RT-PCR kit (Thermo Fisher Scientific, Waltham, MA, USA) was utilized for reverse transcription of extracted RNA followed by PCR. A 48-well plate StepOne instrument (Applied Biosystems, USA) was used in a thermal profile as follows: 10 min at 45 °C for reverse transcription, 2 min at 98 °C for RT inactivation, initial denaturation by 40 cycles of 10 s at 98 °C, 10 s at 55 °C, and 30 s at 72 °C for the amplification step. After the RT-PCR run, the data were expressed in cycle threshold (Ct) for the studied genes and β-actin as a housekeeping gene. Normalization for variation in the expression of each target gene; GPC 3, SULF2, and lncRNA-AF085935 was carried out referring to the mean critical threshold (CT) expression values of β-actin by the ΔΔCt method. The relative quantitation of each gene is quantified according to the calculation of the 2−∆∆Ct method. Primers sequence used for target genes was presented in Table 2.

The IBM SPSS software version 20 was utilized for performing the statistical analysis of this study. The results were presented as mean ± standard deviation. To evaluate the differences between groups, the one-way analysis of variance (ANOVA) accompanied by post-hoc Bonferroni correction test was applied. A p value of less than 0.05 was considered statistically significant.

This research was funded by the Deanship of Scientific Research at Princess Nourah bint Abdulrahman University through the Fast-Track Research Funding Program. 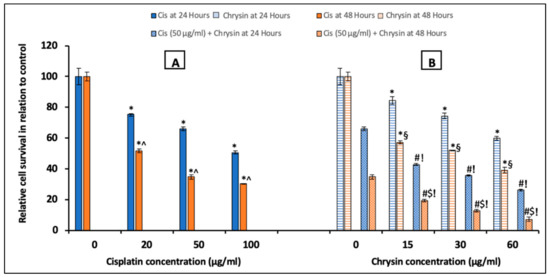 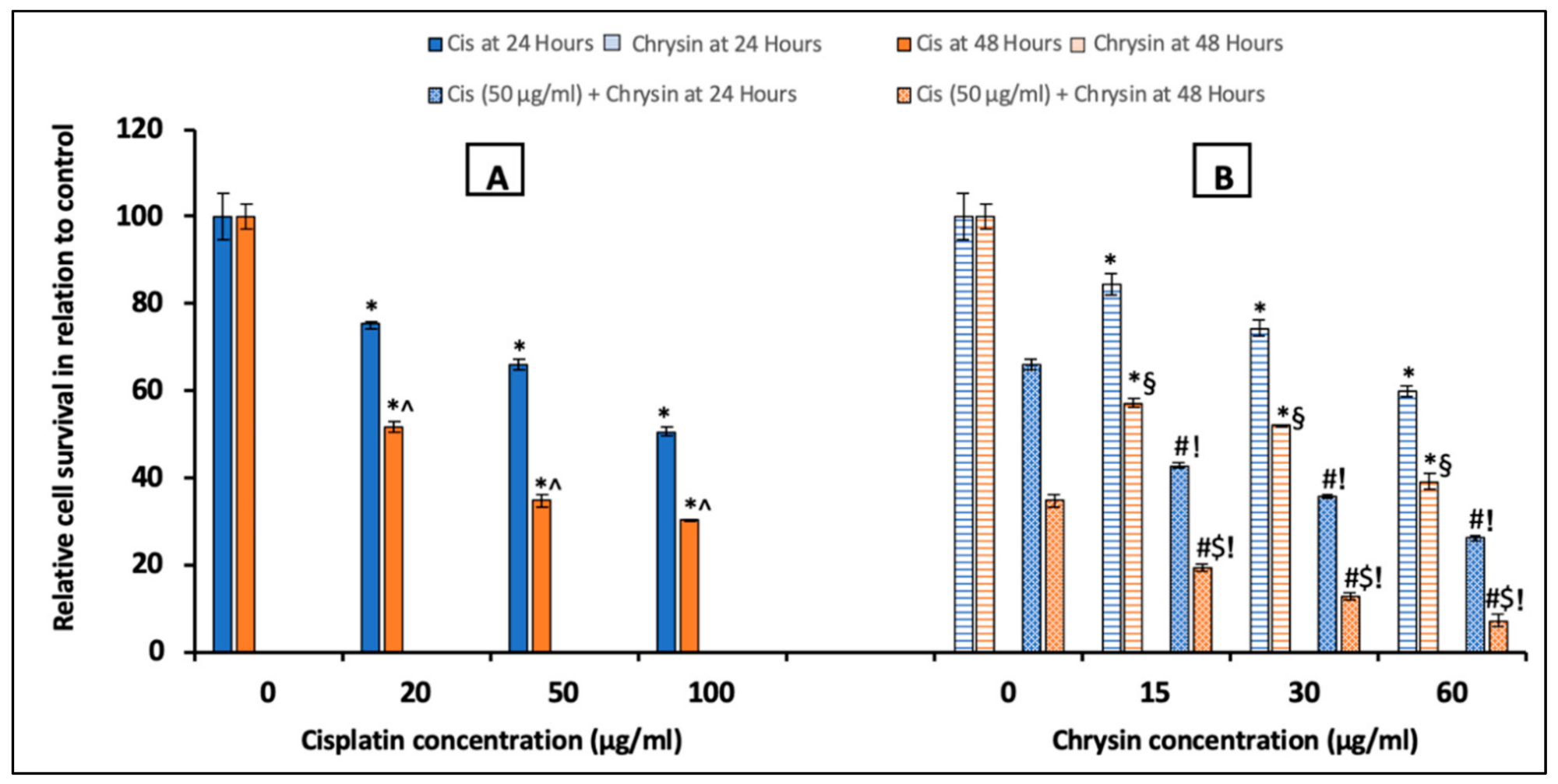 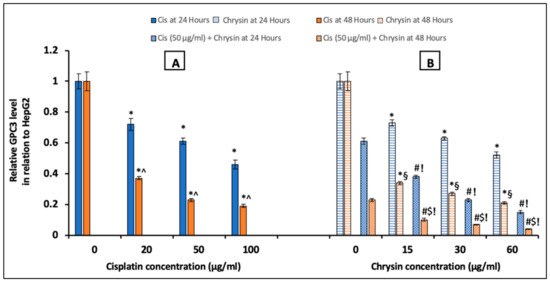 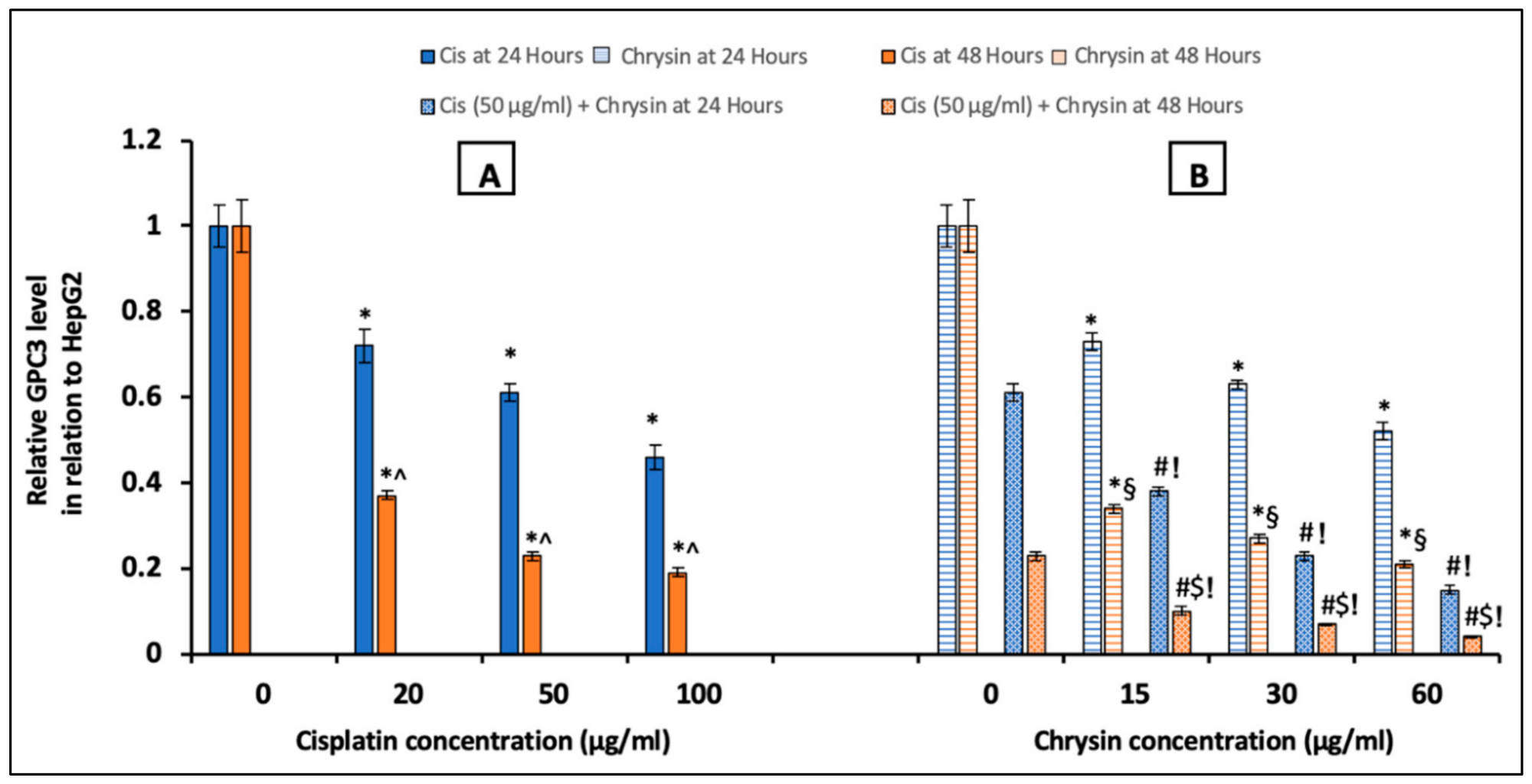 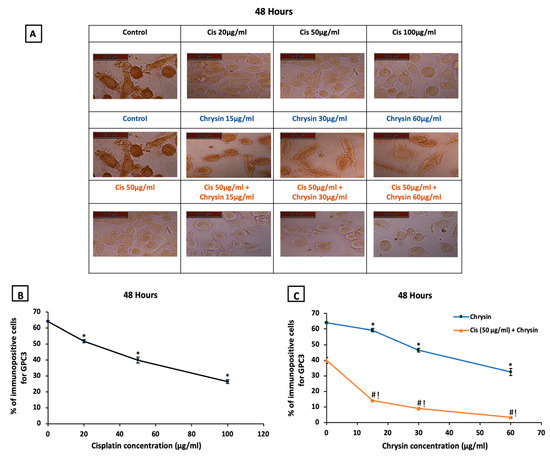 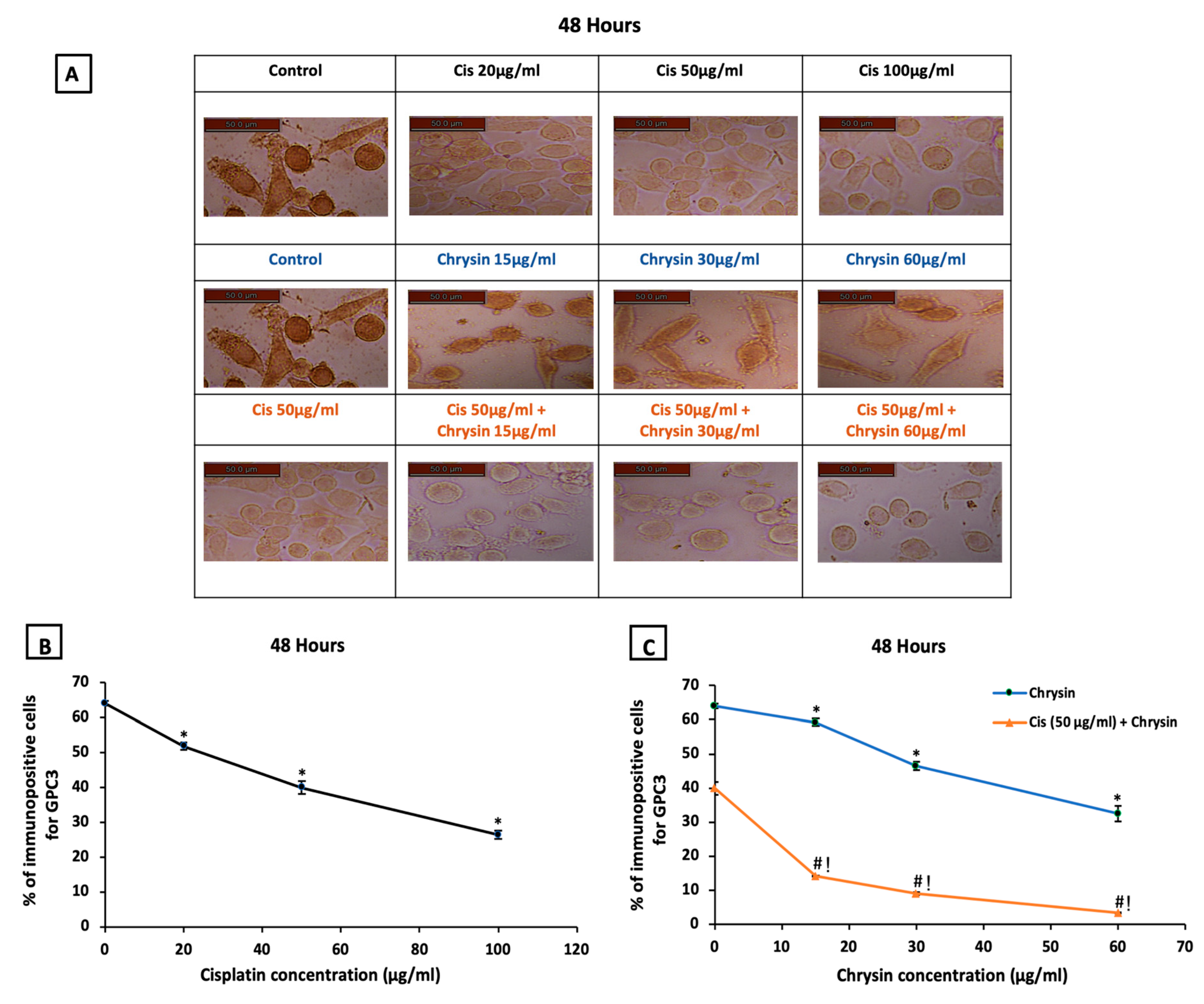 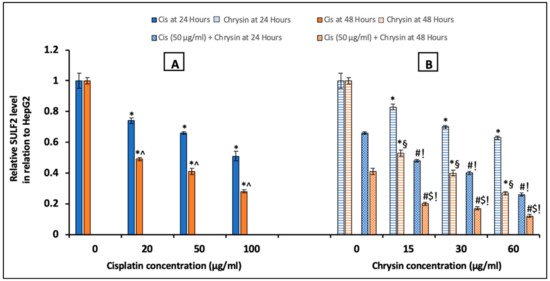 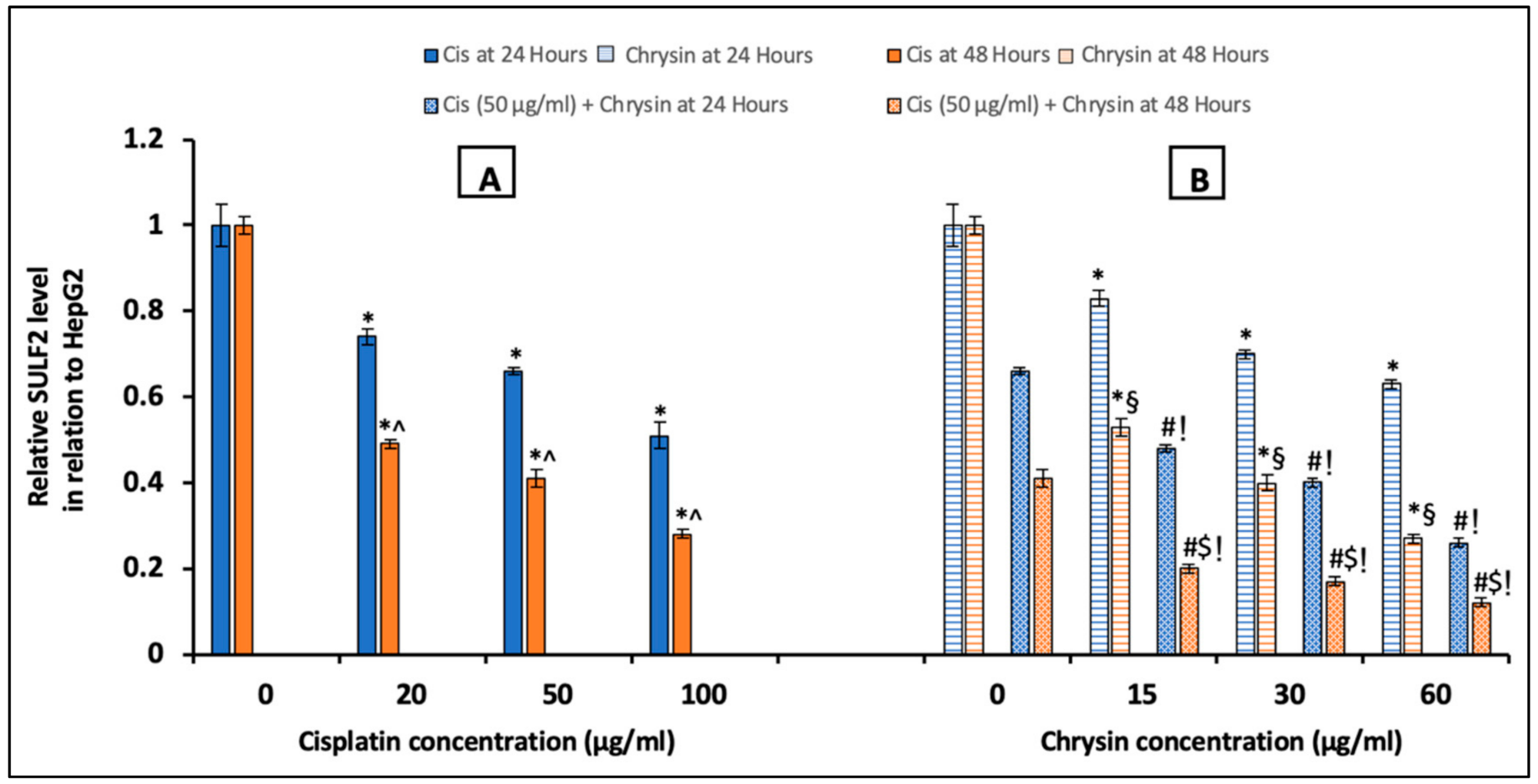 Table 2. Primers sequence of the studied genes.
Table 2. Primers sequence of the studied genes.
© 2020 by the authors. Licensee MDPI, Basel, Switzerland. This article is an open access article distributed under the terms and conditions of the Creative Commons Attribution (CC BY) license (http://creativecommons.org/licenses/by/4.0/).
We use cookies on our website to ensure you get the best experience. Read more about our cookies here.
Accept
We have just recently launched a new version of our website. Help us to further improve by taking part in this short 5 minute survey here. here.
Never show this again