Two-pore domain potassium (K2P) channels maintain the cell’s background conductance by stabilizing the resting membrane potential. They assemble as dimers possessing four transmembrane helices in each subunit. K2P channels were crystallized in “up” and “down” states. The movements of the pore-lining transmembrane TM4 helix produce the aperture or closure of side fenestrations that connect the lipid membrane with the central cavity. When the TM4 helix is in the up-state, the fenestrations are closed, while they are open in the down-state. It is thought that the fenestration states are related to the activity of K2P channels and the opening of the channels preferentially occurs from the up-state. TASK-2, a member of the TALK subfamily of K2P channels, is opened by intracellular alkalization leading the deprotonation of the K245 residue at the end of the TM4 helix. This charge neutralization of K245 could be sensitive or coupled to the fenestration state. Here, we describe the relationship between the states of the intramembrane fenestrations and K245 residue in TASK-2 channel. By using molecular modeling and simulations, we show that the protonated state of K245 (K245+) favors the open fenestration state and, symmetrically, that the open fenestration state favors the protonated state of the lysine residue. We show that the channel can be completely blocked by Prozac, which is known to induce fenestration opening in TREK-2. K245 protonation and fenestration aperture have an additive effect on the conductance of the channel. The opening of the fenestrations with K245+ increases the entrance of lipids into the selectivity filter, blocking the channel. At the same time, the protonation of K245 introduces electrostatic potential energy barriers to ion entrance. We computed the free energy profiles of ion penetration into the channel in different fenestration and K245 protonation states, to show that the effects of the two transformations are summed up, leading to maximum channel blocking. Estimated rates of ion transport are in qualitative agreement with experimental results and support the hypothesis that the most important barrier for ion transport under K245+ and open fenestration conditions is the entrance of the ions into the channel. View Full-Text
Keywords: K2P channels; TASK-2 channels; structure–function relationships; homology modeling; modeling of protein dynamics K2P channels; TASK-2 channels; structure–function relationships; homology modeling; modeling of protein dynamics
►▼ Show Figures 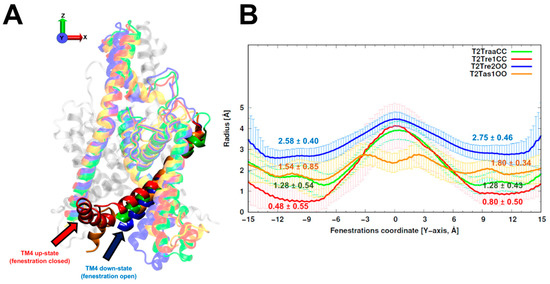