A network of sensory and sympathetic nerve fibers can be observed throughout bone tissue, innervating cortical and trabecular bone, the bone marrow, and the periosteum. Neurotransmitters from these nerve fibers are critically involved in the control of vascularization, bone development, and bone growth. In the adult skeleton, they modulate bone cell function and differentiation as well as bone remodeling processes [1,2]. In addition, neurotransmitter signaling has been shown to influence bone regeneration during fracture healing [3] and is involved in cartilage and subchondral bone alterations during disease progression of osteoarthritis [4].
The sensory neuropeptide substance P (SP) is synthesized from the tachykinin 1 (TAC1) gene and signals predominantly via the neurokinin (NK) 1 receptor [5,6]. Recent studies have discovered a strong neuro-osteogenic connection. Sensory nerve fibers demonstrated intense nerve regeneration and fast regrowth (sensory sprouting) into injured tissue after tibial fractures [7]. Our group reported increased pressure resistance and impaired bone structure after fracture in SP-deficient mice. In addition, callus maturation was altered [4]. Ding et al. described poorer fracture healing and a decrease of SP at the injury site after femoral shaft fractures in ovariectomized (OVX) mice compared to control mice [8], suggesting a critical role of this neuropeptide during bone repair, not only under physiological conditions, but also under pathophysiological conditions.
α-Calcitonin gene-related peptide (α-CGRP) is synthesized from the CALC I gene by alternative splicing and signals preferentially via the calcitonin receptor-like receptor (CLR)/receptor activity modifying protein (RAMP) 1 complex [9]. The binding of α-CGRP to this receptor complex located on osteoblasts, bone marrow macrophages (BMM), and osteoclasts under in vitro conditions mainly results in anabolic effects promoting bone formation [10,11]. In vivo, this osteo-anabolic effect has been shown in a rat-based bone fatigue model by increasing osteogenesis and inhibiting osteoclastic bone resorption [12]. In a mouse model, deficiency of α-CGRP resulted in the development of an age-related osteopenic bone phenotype [13]. These effects point out critical regulatory functions of α-CGRP during bone remodeling processes and let us assume a likewise important function during bone repair.
Catecholamines, such as epinephrine and norepinephrine (NE), are the major neurotransmitters of the sympathetic nervous system (SNS). By binding to different adrenergic receptor subtypes (α1, α2, β1, β2, β3) expressed on a variety of bone cells, the SNS is critically involved in modulating bone homeostasis and remodeling processes [14,15,16,17]. Disorders, such as depression and drugs that exert their effects via adrenergic receptors have been associated with increased bone loss and fracture risk [18,19]. In previous studies, we analyzed bone properties and fracture healing in chemically sympathectomized (SYX) mice. The destruction of peripheral sympathetic nerve fibers through the injection of 6-hydroxydopamine (6-OHDA) reduces the production of adrenergic neurotransmitters by about 80% [20,21] and resulted in impaired structural bone properties, which was presumably caused by increased bone resorption. Additionally, the absence of sympathetic innervation delayed callus maturation during early tibial fracture healing [4]. Altogether, the SNS seems to have a crucial impact on physiological bone remodeling. However, its role in fracture healing and bone regeneration under impaired musculoskeletal conditions is not well known.
A number of comorbidities exist which impact on bone homeostasis and often result in fracture-healing complications, such as ischemia, impaired vascularization, and osteoporosis [22]. Estrogen belongs to the gonadocorticoid class of steroid hormones and plays a key role in the growth, regulation, and maintenance of bone mass. Besides aging and inactivity, estrogen deficiency counts as a major cause of involutional osteoporosis. The decrease in estrogen levels at and after menopause results in increased bone turnover rates and remodeling imbalances [23,24], which also impairs the process and the outcome of fracture healing.
As indicated above, neurotransmitter signaling has crucial modulatory functions during bone remodeling and repair processes. Nevertheless, it is unknown whether neurotransmitters of the sensory and sympathetic nervous system have a similar modulating effect under impaired conditions as they do have under physiological musculoskeletal conditions. Therefore, we used ovariectomized (OVX) mice as a model for osteoporosis, resembling the human menopausal situation, for studying fracture healing. The aim of the study was to delineate the role of the sensory and sympathetic nervous system and their neurotransmitters in bone regeneration under pathophysiological conditions. We compared fracture healing in OVX SP- and α-CGRP-deficient mice and in OVX mice after chemical destruction of the SNS (SYX) with fracture healing in OVX WT controls.

2.1. Locomotion Analysis before and after Fracture

Differences in weight bearing during fracture healing might influence the healing process. Therefore, we monitored nightly locomotion during a time span of 1 h. The overall distance moved did not differ between α-CGRP−/− and WT mice but we observed reduced locomotion of Tac1−/− mice before and 5, 13, and 21 days after setting the fractures (Figure 1A). Likewise, locomotion was reduced in SYX mice 5, 9, and 21 days after fracture when compared to WT control animals (Figure 1B).

2.2. Mechanical Hyperalgesia before and after Fracture

2.5. Number of CD4- and CD8-Positive T Cells during Callus Maturation

All experiments were conducted in accordance with the local veterinary administration (Umweltamt, Dept. Veterinärwesen und Verbraucherschutz, City Regensburg, approved on 19.12.2014) and in agreement with the ethical committee appointed by the local authority (Regierung Unterfranken, Bayern, Germany) controlling animal experimental usage (Az.: 54-2532.1-23/14). Experimental protocols and methods were approved and carried out according to the regulations and guidelines of these committees. We used 10 weeks old female mice [53,55,56], kept under standard housing conditions (12h dark/light cycle) with free access to food and water. We used Tac1-/- mice that do not produce SP due to a targeted mutation in the Tachykinin 1 gene [57]. In addition, we used α-CGRP-/- mice (generous gift from Ronald B. Emeson; Department of Pharmacology, Molecular Physiology, and Biophysics, Vanderbilt University School of Medicine, Nashville, TN, USA), created by an insertion of a stop-codon into the α-CGRP coding region [58]. Both strains were bred back to a C57Bl6/J background. C57Bl6/J mice (Breeding pairs: Charles River, Sulzfeld, Germany; breeding with offspring: central animal facility, University of Regensburg, Regensburg; barrier-maintained mouse colonies) were randomly divided into a control group and a sympathectomized group. 6-hydroxydopamine (6-OHDA, chemical sympathectomy using 80 µg/g bodyweight, Sigma, Steinheim, Germany) was injected i.p. at days 8, 7, and 6 before and on day 13 after (in mice used for analysis of time points 16 and 21 days after fracture) fracture setting in a group of C57Bl6/J mice to destroy peripheral sympathetic nerve fibers, thereby reducing the production of adrenergic neurotransmitters by about 80% [20,21].

Differences in locomotion were analyzed 2 days before, and 5, 9, 13, 16, and 20 days after setting the fractures. Mice were set separately into new home cages and monitored with a video camera for 1 h during night time (9:30–10:30 p.m.) after an appropriate acclimatization period of 2–3 h. Total distance moved (cm) was analyzed using the EthoVision XT 9 Video-Tracking-System (Noldus Information Technology, Wageningen, The Netherlands).

Mechanical hyperalgesia (touch sensitivity) was analyzed in both hind legs on days -4 and -2 before, and on days 5, 9, 13, 16, and 21 after fracture, using the Dynamic Plantar Aesthesiometer test (Ugo Basile, Comerio, Italy) as described before [4]. Briefly, the mice were placed on a grid in separate areas and the measurement device was placed under one paw. Upon starting, the automatic process raised a von Frey filament (part of the Dynamic Plantar Aesthesiometer device; Ugo Basile, Comero Italy) with steadily increasing force until the mouse withdrew the paw. Three values were recorded in each test for each hind paw and were averaged.

Femora were dissected 5, 9, 13, 16, and 21 days after fracture and prepared for histological staining. In brief, bones were fixed in 10% paraformaldehyde (Merck Chemicals GmbH, Darmstadt, Germany) (in PBS) for 24 h and decalcified for 6 weeks in 20% ethylene diaminetetraacetic acid (EDTA, pH 7.3; Roth, Karlsruhe, Germany). The intramedullary pin was removed and the bone was dehydrated through a graded series of ethanol solutions. Afterwards, femora were embedded into paraffin and 5 µm sections were cut along the shaft axis. Three sagittal paraffin sections with a minimal intersection distance of 30 µm were selected for all stainings, respectively, and were deparaffinized and rehydrated before the staining procedures. After staining, overview images were scanned for further semi-quantitative analysis (TissueFAXSi plus System, TissueGnostics, Vienna, Austria; INST89/341-1FUGG).

Collected blood was kept at RT for up to 60 min to allow clotting. Afterwards, samples were centrifuged at 2000× g for 10 min to prepare serum. Serum samples were stored at −80 °C until usage.
Cross Linked C-Telopeptide of Type I Collagen (CTX I) was analyzed as a bone resorption marker in serum 9 and 16 days after fracture by ELISA (# CEA665Mu, Cloud-Clone Corp.; Biozol Diagnostica Vertrieb GmbH, Eching, Germany) according to the manufacturer’s instructions.
The QuantiChrom™ Alkaline Phosphatase Assay Kit (# DALP-250, BioAssay Systems, Biotrend Chemikalien GmbH, Cologne, Germany) was used according to the manufacturer’s protocol to measure alkaline phosphatase (ALP) in serum as a marker for bone formation.

Graph Pad Prism 6.0 software (GraphPad Software, San Diego, CA, USA) was used for statistical analysis and Graph preparation. Data shown as time course are expressed as mean ± SEM or SD as indicated in the figure legend. Data represented in box plots are expressed as median ± min/max. Differences between the groups were analyzed using a two-tailed Mann-Whitney U-test. p-Values less than 0.05 were considered as significant.

In conclusion, the absence of α-CGRP seems to promote M2 macrophage polarization and reinforced pain-related processes, but has no effects on fracture callus maturation and the T-cell number in OVX mice as a model for impaired musculoskeletal conditions. The absence of SP seems to modulate pain-related processes and locomotion activity and affects ossification of hypertrophic cartilage tissue. The destruction of sympathetic nerve fibers has no effect on pain-related processes, but seems to influence locomotion activity and bony callus maturation, and modulates the CD4/CD8 T-cell ratio.
Furthermore, our data indicate stronger effects of SP and sympathetic nerve fibers on callus maturation during middle and late stages of fracture healing, whereas loss of α-CGRP might influence macrophage-driven inflammatory processes during the early stages under experimental postmenopausal conditions. We suggest that SP and sympathetic signals play different roles in bone regeneration under physiological versus pathophysiological conditions.

We are grateful to Anja Pasoldt, Maren Hofmann and Mandy Vogel for their superior technical assistance. 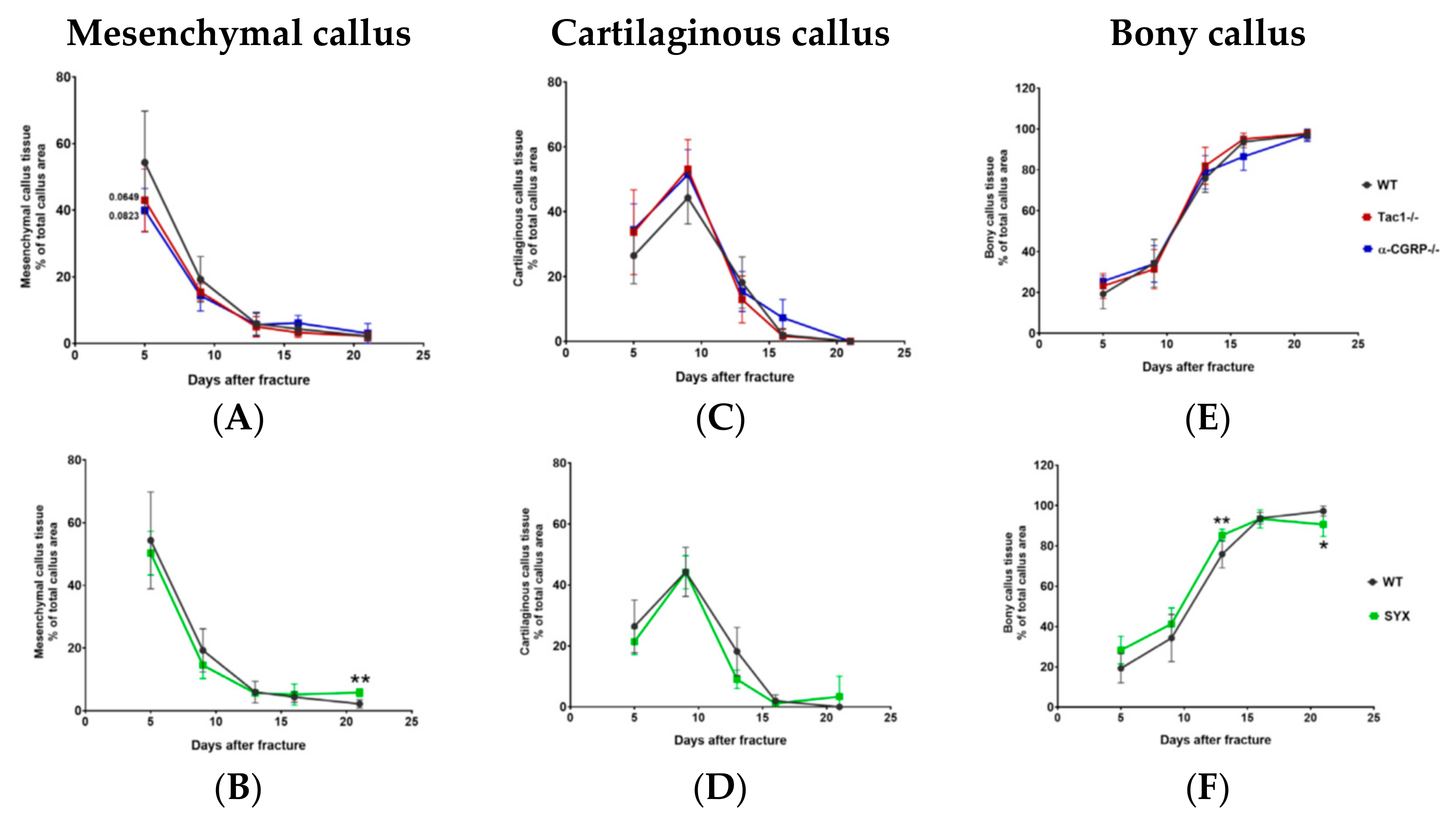 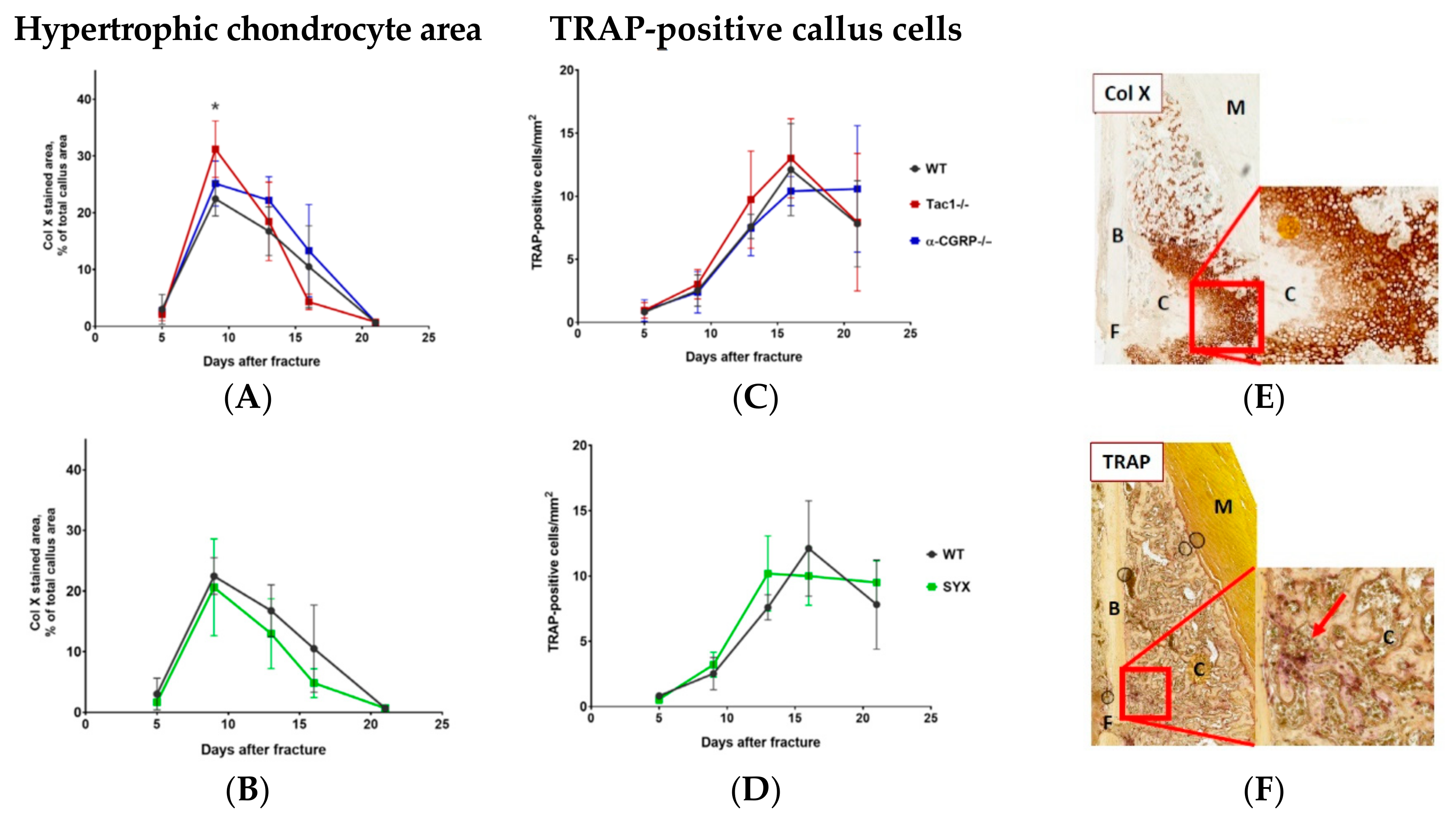 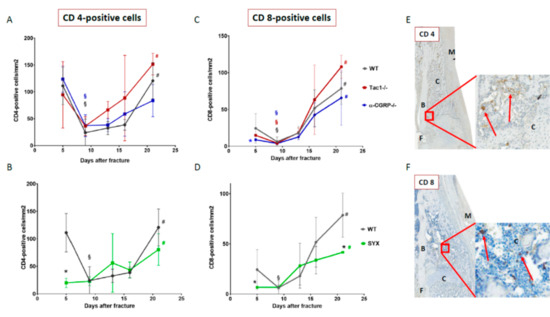 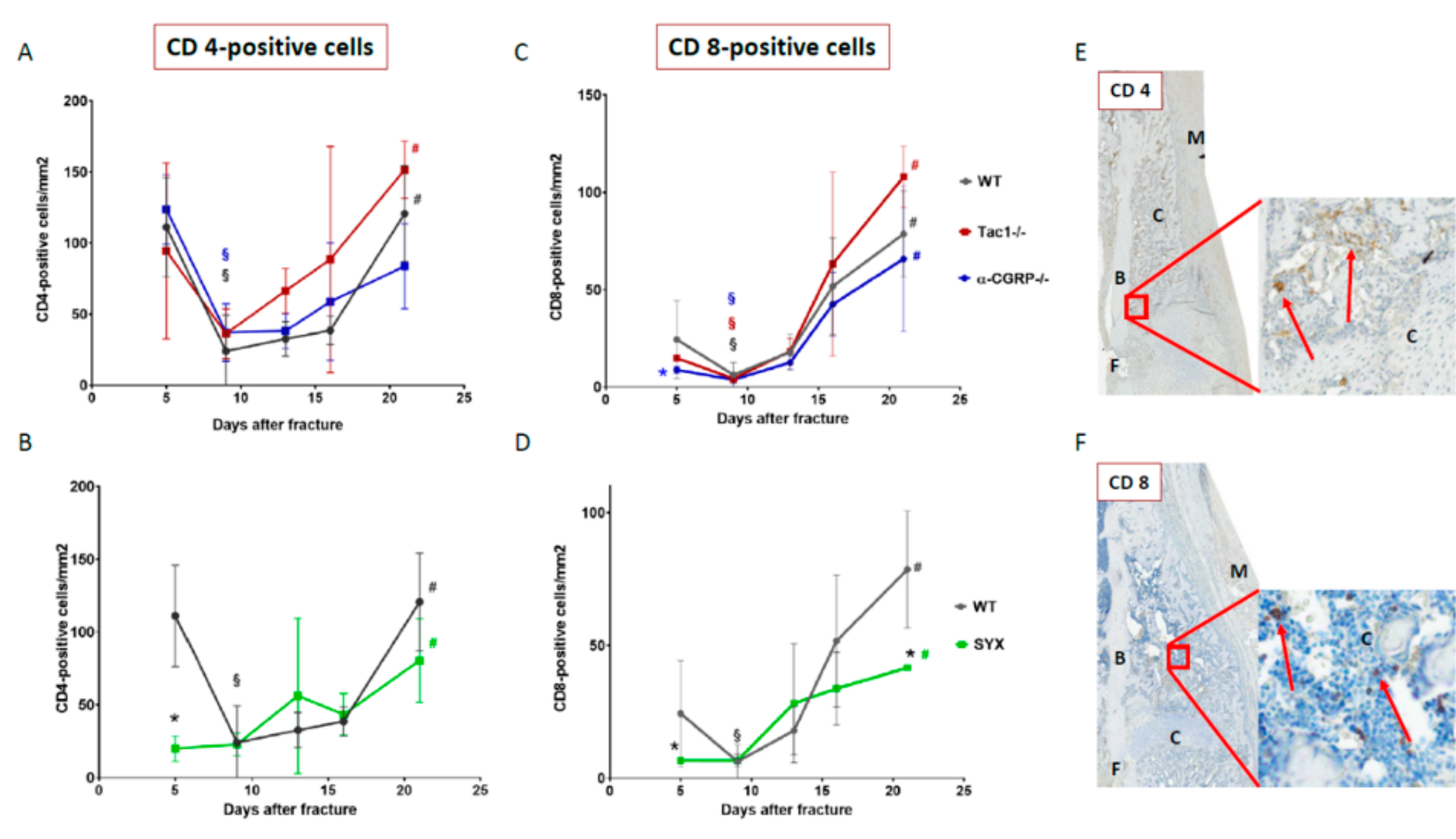