:
In some instances, when chemicals bind to proteins, they have the potential to induce a conformational change in the macromolecule that may misfold in such a way that makes it similar to the various target sites or act as a neoantigen without conformational change. Cross-reactivity then can occur if epitopes of the protein share surface topology to similar binding sites. Alteration of peptides that share topological equivalence with alternating side chains can lead to the formation of binding surfaces that may mimic the antigenic structure of a variant peptide or protein. We investigated how antibodies made against thyroid target sites may bind to various chemical–albumin compounds where binding of the chemical has induced human serum albumin (HSA) misfolding. We found that specific monoclonal or polyclonal antibodies developed against thyroid-stimulating hormone (TSH) receptor, 5′-deiodinase, thyroid peroxidase, thyroglobulin, thyroxine-binding globulin (TBG), thyroxine (T4), and triiodothyronine (T3) bound to various chemical HSA compounds. Our study identified a new mechanism through which chemicals bound to circulating serum proteins lead to structural protein misfolding that creates neoantigens, resulting in the development of antibodies that bind to key target proteins of the thyroid axis through protein misfolding. For demonstration of specificity of thyroid antibody binding to various haptenic chemicals bound to HSA, both serial dilution and inhibition studies were performed and proportioned to the dilution. A significant decline in these reactions was observed. This laboratory analysis of immune reactivity between thyroid target sites and chemicals bound to HSA antibodies identifies a new mechanism by which chemicals can disrupt thyroid function.
Keywords:
hapten; neoantigen; cross-reactivity; thyroid; chemicals

Immunological cross-reactivity is expressed when antibodies with similar amino acid homology or similar antibody surface topology bind to the same binding site [1,2]. The interactions of multiple antigenic antibodies with the same binding site are known as cross-reactivity [3]. Cross-reactivity of various antigens with self-tissue proteins can induce tissue-specific autoimmune diseases in susceptible subjects [1,2]. These molecular interactions with the antigen–antibody binding sites can occur from a diverse list of antigen-promoted antibodies [4]. Cross-reactive antibodies from various infections have been found to play a role in autoimmune thyroid disease and thyroid metabolism dysfunction by binding to multiple target sites of the thyroid axis via cross-reactivity [5,6,7,8,9,10,11,12,13,14]. Furthermore, many antibody binding sites are polyfunctional and can accommodate more than one antigenic epitope and play a role in autoimmune disease [15]. Cross-reactive interactions with various target sites of the thyroid axis may also lead to thyroid metabolism disruption.
Reactivity of antibodies with chemicals bound to proteins has the potential to play a cross-reactive role in autoimmune thyroid disease and thyroid metabolism disruption. In addition, the binding of chemicals to self-proteins such as albumin, globulin, or hemoglobin leads to protein misfolding and induces a conformational change in the macromolecule. The alteration of protein topography leads to the binding of the antibody to the protein in the target sites [16,17]. Chemical molecules can bind directly or indirectly to circulating proteins after hepatic or extrahepatic conversion from prohapten to haptens, generating hapten–protein adducts. This leads to neoantigen formation, resulting in systemic T-cell or antibody immune responses against the haptens and self-proteins [16,18].
Conjugation of chemicals bound to human serum albumin (HSA) is found with blood samples of healthy human blood donors. In a study we published of 400 subjects, between 8–22% of individuals exhibited elevated levels of commonly exposed chemicals bound to human serum albumin [19]. Further research identified that these chemicals conjugated to HSA are associated with antibodies to neurological tissue involved in multiple sclerosis [20]. We also determined that elevated levels of bisphenol-A bound to HSA significantly increases the risk for Parkinson’s disease and correlates with alpha-synuclein antibodies [21]. Studies on thyroid cross-reactivity have focused primarily on pathogens and dietary proteins [22,23]. The study of chemical cross-reactivity and thyroid disruption has not been thoroughly investigated.
In this laboratory study, we evaluated the potential for anti-thyroid axis antibodies to bind to various chemical–albumin complexes that have chemically-induced human serum albumin (HSA) misfolding; this misfolding leads such compounds to act immunologically similarly to thyroid target site antigens such as thyroid-stimulating hormone (TSH) receptor, 5′-deiodinase, thyroid peroxidase, thyroglobulin, thyroxine-binding globulin (TBG), thyroxine (T4), triiodothyronine (T3), and various chemicals bound to albumin.
Cross-reactivity between chemically-induced misfolded HSA with the various target sites of the thyroid axis may play a role in the pathophysiology of thyroid autoimmunity. This could impact various aspects of thyroid metabolism, which could interfere with the proper dosage of thyroid hormones, impair thyroid peripheral metabolism, disrupt thyroid feedback loops, and alter thyroid hormone transport. We evaluated the immune reactivity of chemicals bound to human albumin, including chemical compounds found in plastic products, foams, cosmetics, upholstery, dry cleaning agents, fire retardants, metal products, and chemicals commonly found in water and soil contamination. In this study, we investigate whether chemicals bound to human serum albumin can develop into neoantigens that cross-react with thyroid axis sites.

In this investigation, we followed the methods of chemical binding to proteins from our previous publication, in which we ascertained elevated levels of antibodies against xenobiotics in a subgroup of healthy subjects [19]. In that study, we identified antibodies to the same chemical haptens in about 20% of tested individuals. For this study, we used the same binding methods.
We purchased the HSA, BSA, hemoglobin, formaldehyde, tolylene-2.4-diisocyanate, trimellitic anhydride, p-amino benzoic acid, bisphenol-A (BPA), tetrabromobisphenol-A (TBBPA), isopropyl benzoic acid, cyanoethyl benzoic acid, propyl 4-hydroxybenzoic acid, permethrin, mercury chloride, nickel sulfate, cobalt acetate, cadmium chloride, lead acetate, and arsenic oxide from Sigma Aldrich (St. Louis, MO, USA).

4.3. Preparation of Chemicals Bound to HSA

For demonstrating the specificity of anti-thyroid antibodies binding to different chemicals bound to HSA, 10 different strips of microtiter plate coated with fixed concentrations of chemicals–HSA were exposed to serially diluted different thyroid antibodies. The final concentration for each of the anti-thyroid-stimulating hormone receptor, anti-thyroxine deiodinase, anti-triiodothyronine, anti-thyroglobulin, and thyroid peroxidase antibodies ranged from 10 μ/mL to as low as 0.075 μ/mL. After proper incubation washing and addition of secondary antibody, plus completion of all other steps, the ODs were recorded at 405 nm.

Two different rows of microtiter plates coated with different haptenic chemicals, 50 μL serially diluted with the same haptenic chemical concentration of 0, 2, 4, 8, 16, 32, 64, and 128 μg/mL, were added to different wells of microtiter plate and immediately the same concentration of different thyroid antibodies was added to these series of 8-well strips of microtiter plates. After shaking, incubation, and washing, secondary antibodies were added and incubated again. Following repeated washing and the addition of substrate, the color development was measured and ODs were recorded at 405 nm. These analyses were also conducted with the chemicals that were not complexed with HSA, as well as with HSA alone.

D.K. and A.V. designed the study, performed the experiments, and analyzed the data. D.K., A.V., and M.H. wrote the manuscript. All authors have read and agreed to the published version of the manuscript.

The study did not receive any funding.

The authors wish to thank Joel Bautista for his assistance in producing the figures for this manuscript publication. 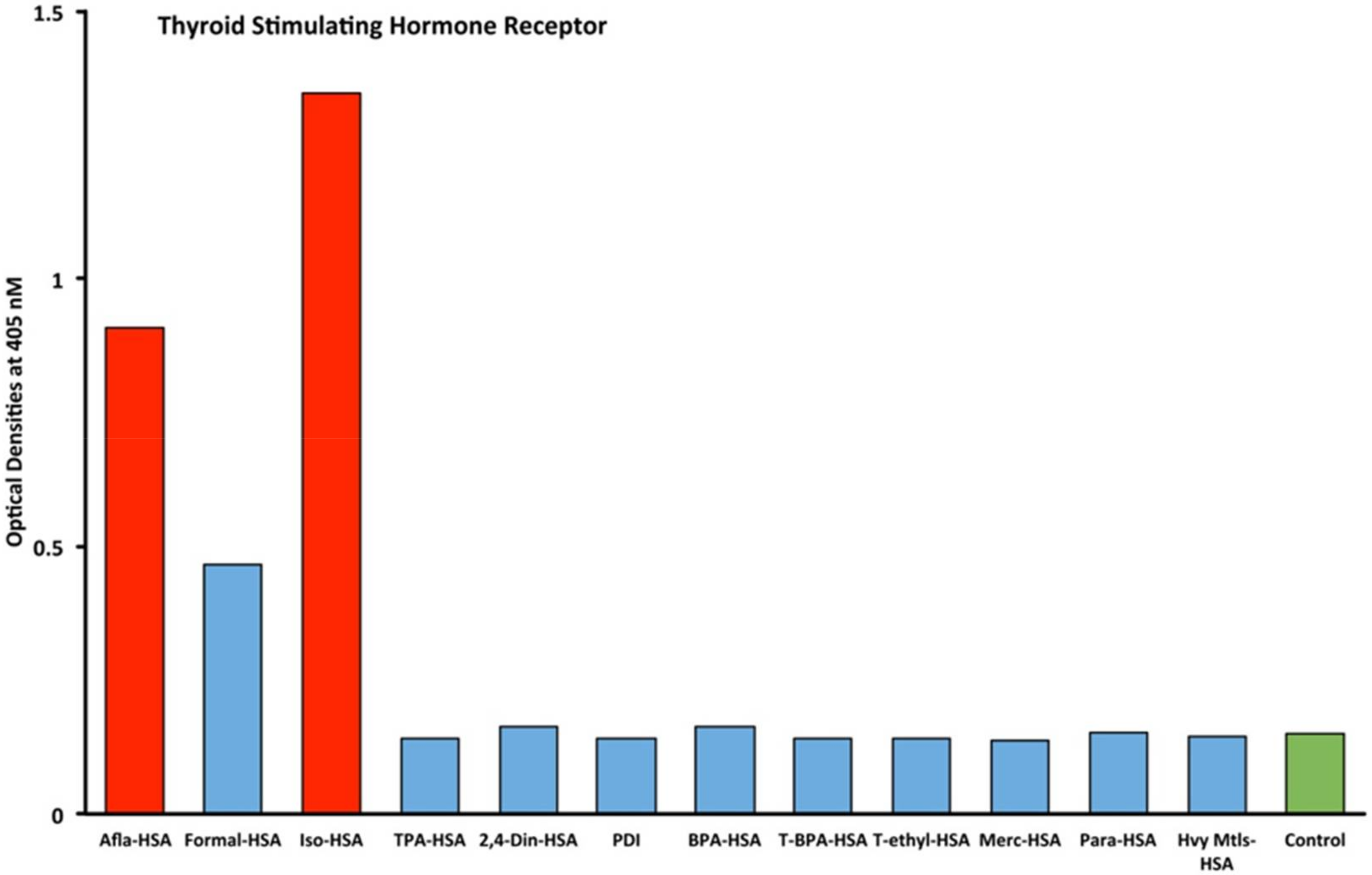 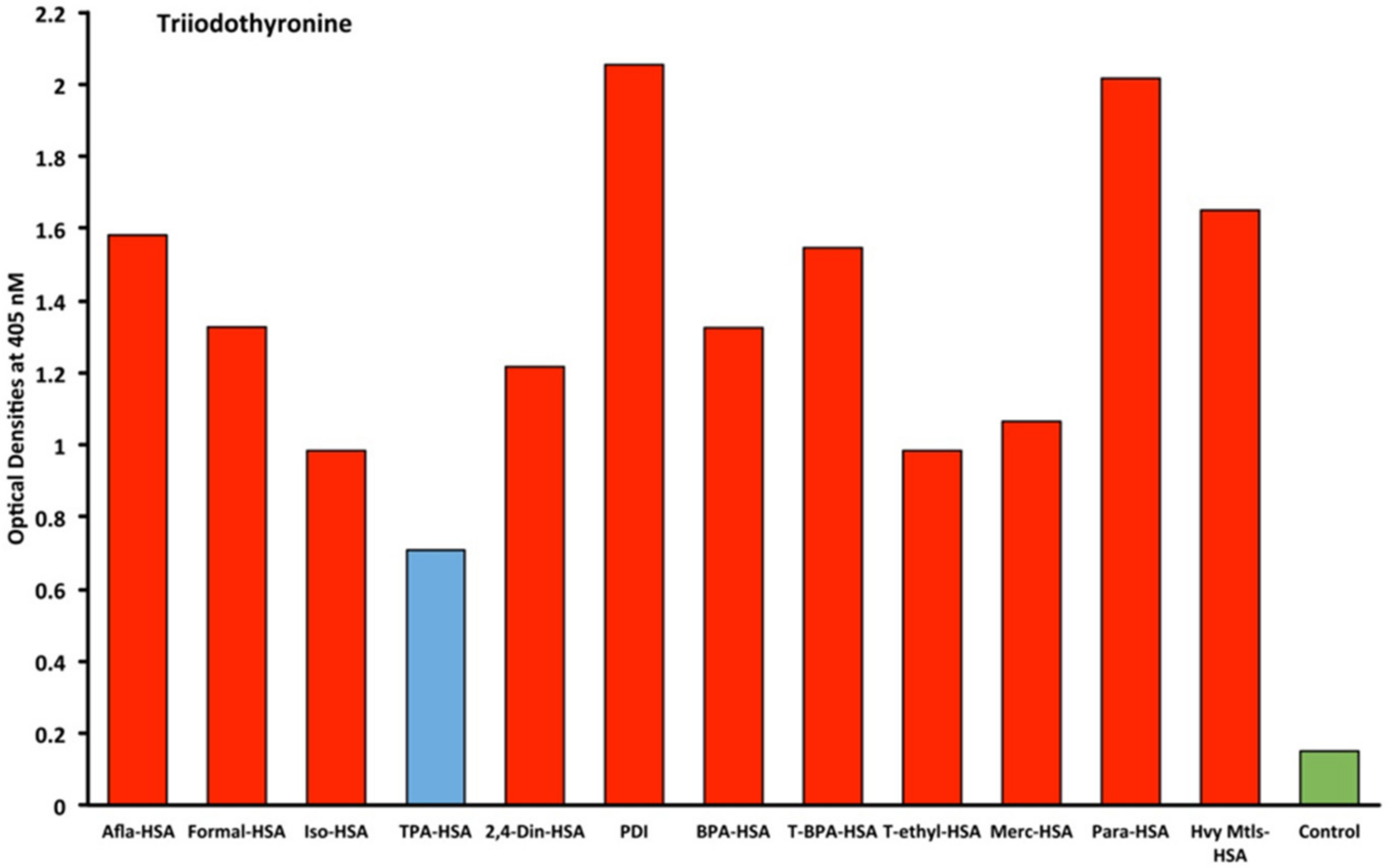 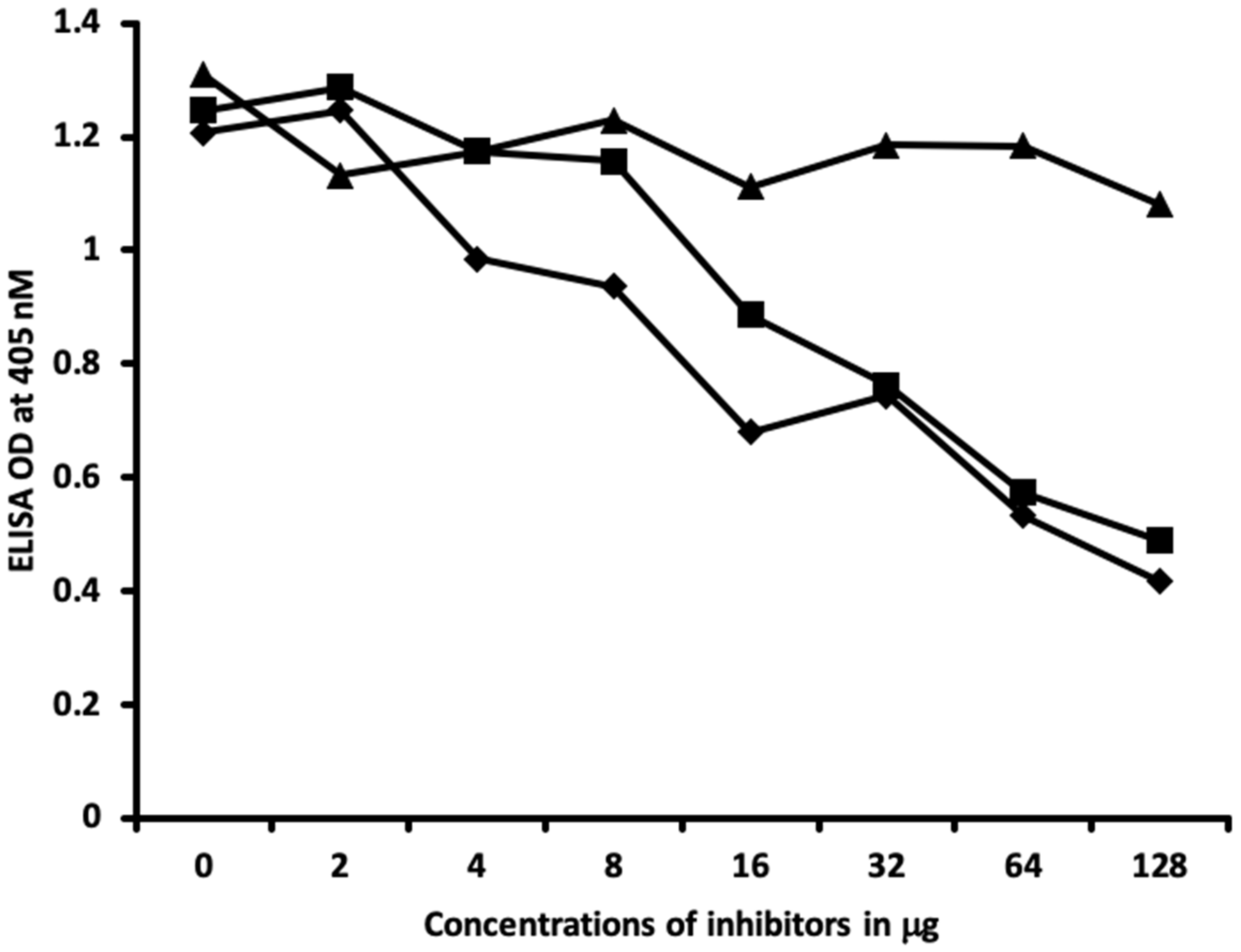 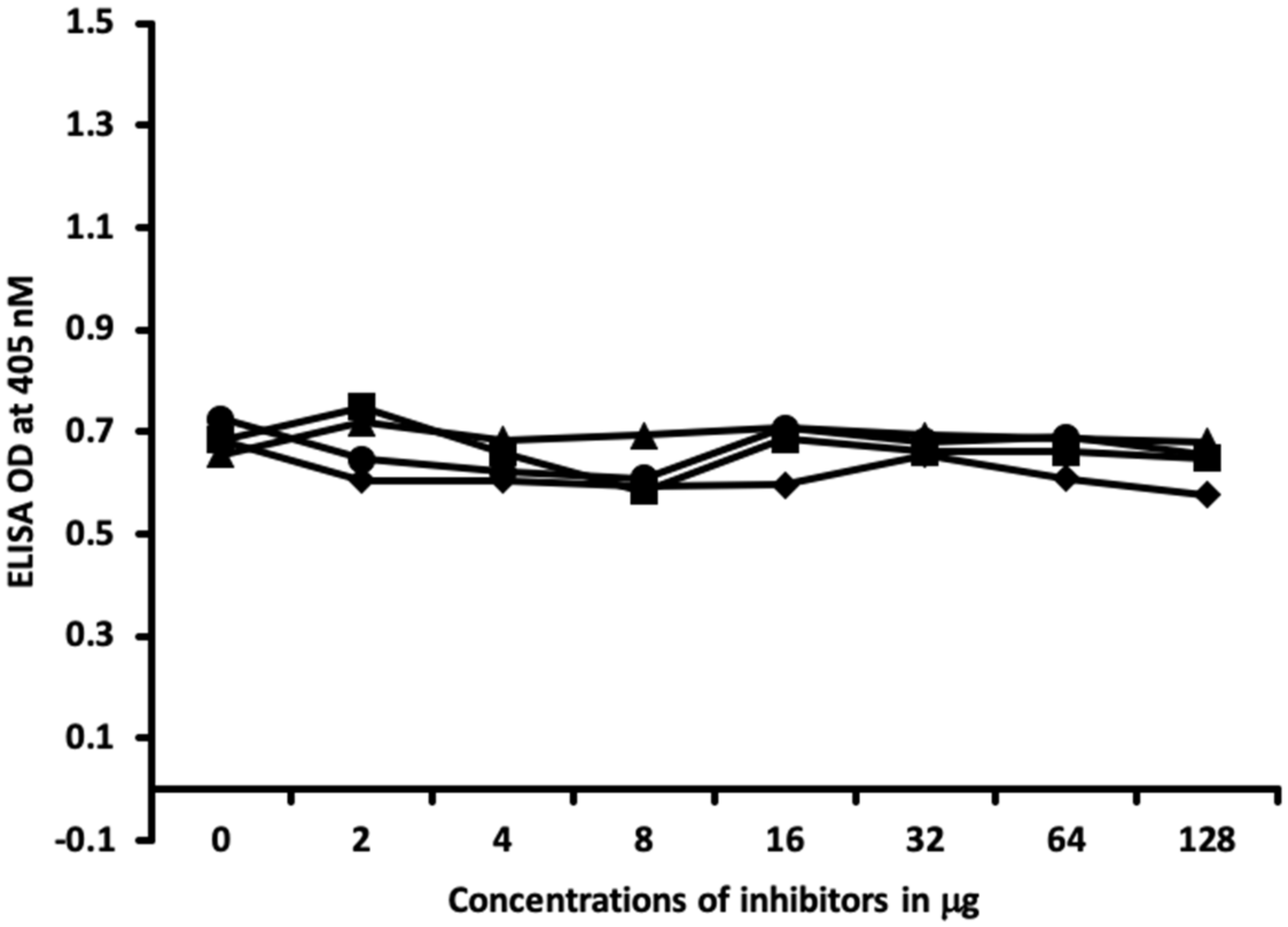