:
Metal-binding inducible proteins called metallothioneins (MTs) protect cells from heavy-metal toxicity. Their transcription is regulated by metal response element (MRE)-binding transcription factor-1 (MTF1), which is strongly recruited to MREs in the MT promoters, in response to Zn and Cd. Mouse Mt1 gene promoter contains 5 MREs (a–e), and MTF1 has the highest affinity to MREd. Epigenetic changes like DNA methylation might affect transcription and, therefore, the cytoprotective function of MT genes. To reveal the CpG site(s) critical for Mt1 transcription, we analyzed the methylation status of CpG dinucleotides in the Mt1 gene promoter through bisulfite sequencing in P1798 mouse lymphosarcoma cells, with high or low MT expression. We found demethylated CpG sites near MREd and MREe, in cells with high expression. Next, we compared Mt1 gene-promoter-driven Lucia luciferase gene expression in unmethylated and methylated reporter vectors. To clarify the effect of complete and partial CpG methylation, we used M.SssI (CG→5mCG) and HhaI (GCGC→G5mCGC)-methylated reporter vectors. Point mutation analysis revealed that methylation of a CpG site near MREd and MREe strongly inhibited Mt1 gene expression. Our results suggest that the methylation status of this site is important for the regulation of Mt1 gene expression.
Keywords:
metallothionein; epigenetics; heavy-metal toxicity

Metallothioneins (MTs) are low-molecular-weight, cysteine-rich, metal-binding proteins [1]. In mammals, there are four main isoforms, MT1 to MT4. The expression of ubiquitous MT1 and MT2 isoforms is induced by heavy metals. These isoforms protect against toxic heavy metals by sequestering them and lowering their concentrations at critical intracellular sites [2,3,4]; they also provide protection against reactive oxygen species (ROS) [5,6,7]. The roles of MT1/2 in immunity and obesity were reported using MT1/2 knock-out mice [8], and changes in the MT expression levels might affect the biological functions of MTs.
Epigenetics refers to the control of gene expression via mechanisms not directly related to the DNA coding sequence [9]. Epigenetic modifications regulate gene expression through various epigenomic marks; for example, methylation of cytosine residues at CpG sites with histone modifications, to regulate gene expression [10,11]. The methylated CpG sites recruit methyl CpG-binding domain proteins and thereby prevent the binding of transcription factors to the DNA [12]. CpG methylation or demethylation in the MT promoters might cause individual differences in MT expression levels, and therefore differences in susceptibility to heavy metal toxicity.
Metal response element (MRE)-binding transcription factor-1 (MTF1) activates MT1/2 transcription in response to heavy metals [13]. Among 5 MREs (a–e) in the 5′-flanking region of the mouse Mt1 gene, MTF1 shows the highest affinity to MREd [14,15]. MTF1 is an essential transcription factor for basal and metal-induced MT expression [16]. A transcriptional/epigenetic regulator p300, histone acetyltransferase (HAT), is required for MT induction in response to metals [17]. The importance of the formation of the complex containing p300 was shown, such that hexavalent chromium (Cr6+) inhibited MT induction via inhibition of this complex formation [18,19]. However, the inhibitory effects of Cr6+ on MT induction were due to its effects on the HAT-independent transactivation ability of p300. The importance of p300 histone acetyltransferase activity in MT expression remains unclear. MT expression is modulated by epigenetic modifications [20,21,22,23,24]. Zinc deficiency enhances the cadmium-induced expression of mouse hepatic MT2, without change of basal MT2 expression in vivo; it leads to hypermethylation of CpG sites and enrichment in the acetylation of histones H3/H4 in the 5′-flanking region of the Mt2 gene [25]. We reported that the Mt1 gene is suppressed in P1798 mouse lymphosarcoma cells, but long-term cadmium (Cd) exposure (0.1 μM, 7days) and subsequent short-term exposure to high Cd concentrations (10 μM, 3 hr) decreases MT1 DNA methylation and induces the Mt1 gene [26]. We hypothesized that certain CpG sites in the MT1 promoter were crucial for Mt1 gene expression, because the CpG sites were reported to be crucial for the regulation of several genes [27,28]. However, the CpG site(s) whose methylation status is important for MT1 expression is not yet determined.
Here, we found that the methylation status of CpG dinucleotides in the 5′-flanking region of the Mt1 gene differed in P1798 cells expressing high and low levels of MT1. Luciferase analysis revealed that the effect of CpG methylation was not uniform. We found that methylation status of a CpG site near MREd and MREe is important for the regulation of Mt1 gene expression.

2.1. Characterization of P1798 Cells Treated with 5-AzaC Plus Cd

In P1798 cells, MT1 expression is extremely low but is increased by 5-azacytidine (5-AzaC) plus Cd (5-AzaC/Cd) treatment, because of CpG demethylation by 5-AzaC and MTF1 activation by Cd [22]. The level of MT1 mRNA was increased in 5-AzaC/Cd-treated cells (Table 1). Untreated P1798 cells showed extremely low MT1 expression—98.9% cells had MT1 expression (arbitrary units) under 3 × 102 (Figure 1A, left panel). After 5-AzaC/Cd treatment, 51.5% of the cells still had low MT1 expression and 48.5% of the cells had high MT1 expression (over 3 × 102 on the MT1 axis). Bisulfite sequencing revealed that cytosines at CpG sites in some regions of the MT1 promoter tended to be methylated in cells with low levels of MT1 expression but unmethylated in cells with high levels. The first CpG site and the 14th to 21st CpG sites (between −215 to −127 bp) from the transcription start site were unmethylated in all cells with high MT1 expression (Figure 1B). Similar ununiformed demethylation after 5-AzaC treatment in P1798 cells was reported by Ghoshal et al. [22]. They analyzed methylation status on the 1st to 18th CpG sites and reported that 5-AzaC treatment for 120 hr showed complete demethylation in the region. Thirty-six hour treatment showed partial demethylation only in 1st, 3rd–5th, 7th, and 13th–18th CpG sites. The latter region was near MREd and MREe. As MREd is the most active element in the response to Zn [14,15], we hypothesized that the demethylation of these CpG sites are integrally involved in the expression of MT1.

2.2. Effect of CpG Methylation in the 5′-Flanking Region of the MT1 Gene on Lucia Luciferase Reporter Gene Expression

2.3. Involvement of the MTF1–MRE Pathway on the Inhibition of MT1 Expression by CpG Methylation

MREd is the most active element in response to Zn [14,15]. MT1 promoter activity might be inhibited by HhaI methyltransferase, through inhibition of the MTF1–MRE pathway. We investigated whether this pathway was involved in the inhibition caused by CpG methylation. Basal MT expression was low in MTF1-knockout (MTF1-KO) cells, and Zn or Cd treatments did not increase it [16]. In MTF1-KO cells, the Zn and Cd treatments did not increase MT1 promoter-driven Lucia luciferase activity (Figure 5A). CpG methylation by M.SssI inhibited the activity, whereas methylation by HhaI did not (Figure 5B). Complete CpG methylation by M.SssI might inhibit recruitment of basic transcription apparatus or change the chromatin structure.

Bisulfite conversion reactions, PCR amplification, cloning of the PCR product and sequencing were performed as in [26]. The sequences of the sense and antisense primers were as follows: F primer, 5ʹ-TTAGGAATTTTAGGAAAGGAGA-3ʹ; R primer, 5ʹ-TAAAAAACAACCTACCCTCTTT-3ʹ. The QUMA program (http://quma.cdb.riken.jp/) was used to align, visualize, and quantify sequence data for CpG methylation analysis [33].

Data were analyzed with Tukey’s test in PASW Statistics 18 software (IBM, Armonk, NY, US). Differences between groups were considered significant at p < 0.05. 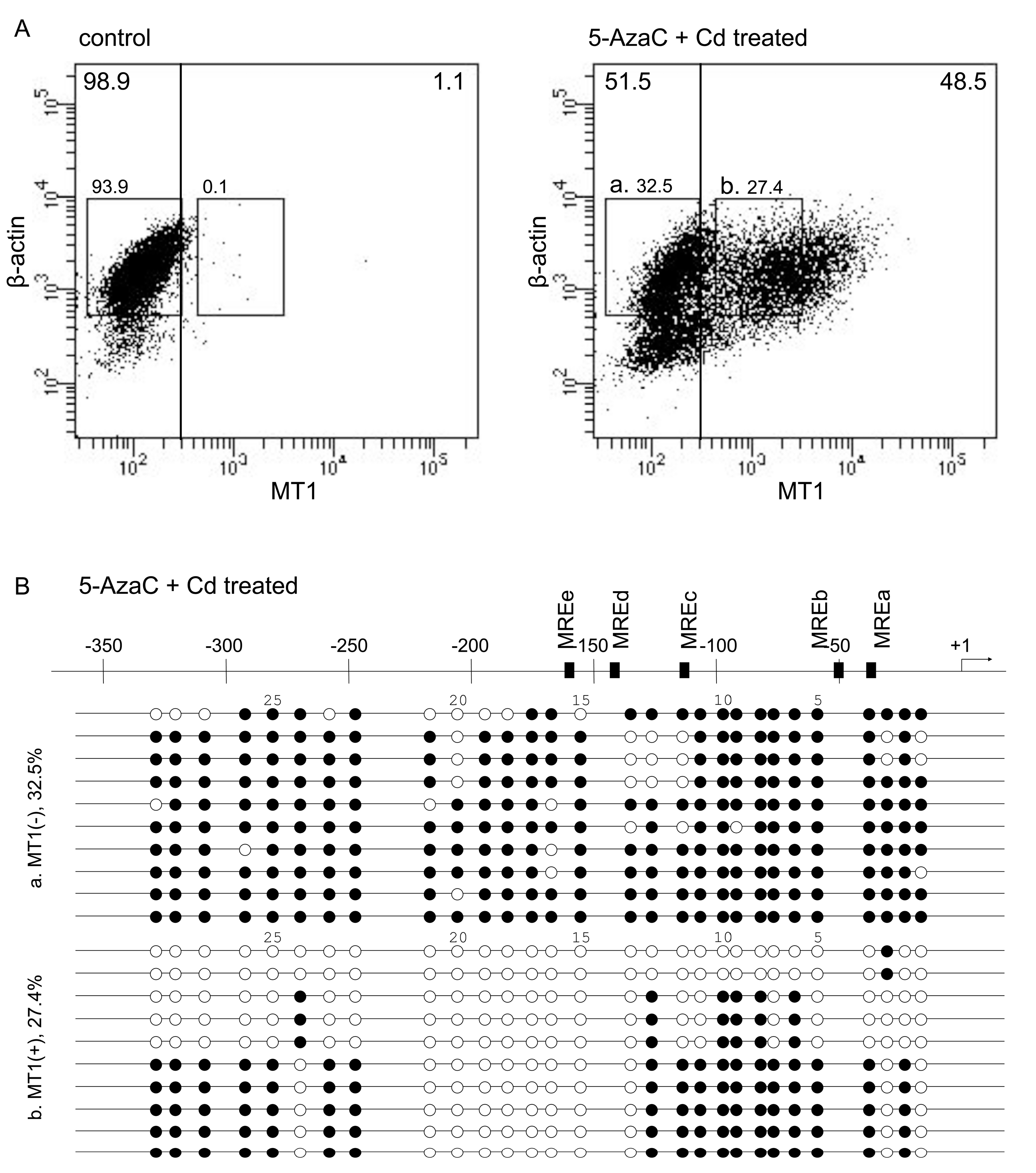 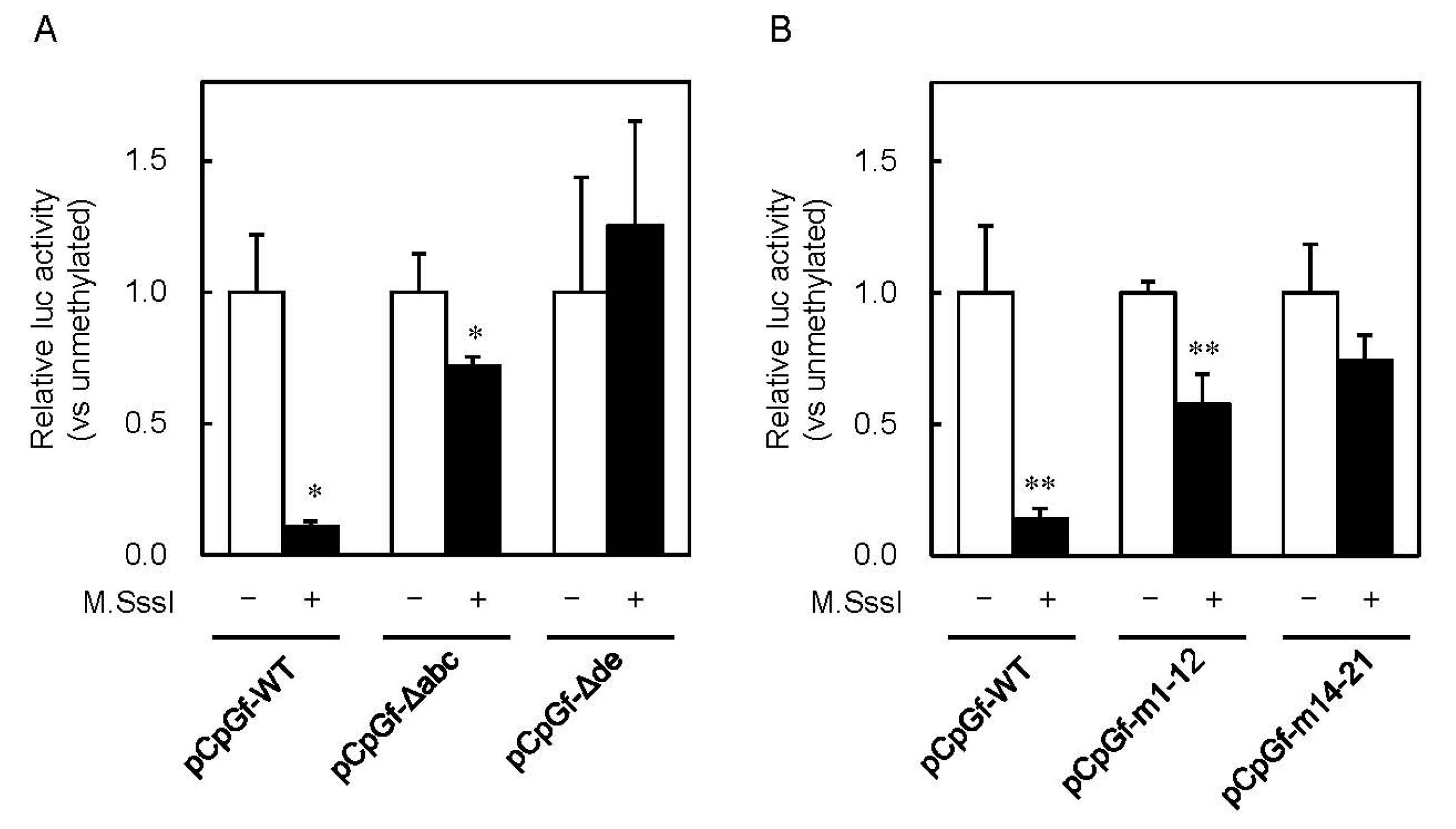