γ-aminobutyrate (GABA) is a critical inhibitory neurotransmitter in both the mammalian peripheral and central nervous systems and maintains brain homeostasis by mediating neuronal excitability [1,2]. A collapse of GABAergic transmission leads to neuronal hyperexcitability and the subsequent development of epileptic seizures [3,4]. An aberrant GABAergic system is also associated with neurological disorders such as Alzheimer’s disease (AD), Parkinson’s disease (PD) and autism spectrum disorders (ASD) [5,6,7], often co-occurring with epileptic seizures [8,9]. Many anticonvulsants promote GABAergic neuronal transmission by enhancing the activity of the GABA type-A (GABAA) receptor and increasing GABA content in the synaptic cleft [4,10]. However, 20–30% of patients with epilepsy showed resistance to existing anticonvulsants [11]. Therefore, the development of powerful novel and safe anticonvulsants are necessary to improve the quality of life for patients with epilepsy.
The GABAA receptor complex consists of five subunits of different families (α1–6, β1–4, γ1–4, δ, ϵ and π) [12]. In the mammalian brain, the αβγ-subunit-containing complex is the major component of the GABAA receptor; a minor complex with αβδ subunits is also observed in the hippocampal dentate gyrus, thalamus and cerebellum [13]. The GABAA receptor function is dependent on the type of subunit complex. For instance, the αβγ complex is sensitive to benzodiazepine, but this is not so for the αβδ complex [12,13]. The α1βγ-type GABAA receptors are localized in the post synaptic region, while α4βδ-type GABAA receptors are observed in extra-synaptic region [14,15].
Fatty acid-binding proteins (FABPs) are essential for the intracellular trafficking of long-chain polyunsaturated fatty acids and mediating their transport to the plasma membrane, mitochondria and nucleus [16]. Of the twelve types of FABP, FABP3, FABP5 and FABP7 are predominantly expressed in human and rodent brains [17,18]. FABP3 has been proposed as a potential biomarker of neurodegeneration, as increased levels of FABP3 have been observed in the cerebrospinal fluid (CSF) of patients with AD, PD, and vascular dementia [19,20,21]. We previously demonstrated that FAPB3 has a critical role in the development and progression of α-synucleinopathies such as PD and dementia with Lewy bodies (DLB). FABP3 null mice show resistance to 1-methyl-4-phenyl-1,2,3,6-tetrahydropyridine (MPTP)-induced dopaminergic neuronal toxicity and PD-like motor deficits [22]. FABP3 deficiency also prevents the spreading of α-synucleinopathy-like pathologies following the injection of α-synuclein preformed fibril (PFF) in the mouse brain [23] and uptake into dopaminergic neurons [24]. Moreover, we have succeeded in producing a novel FABP3 ligand, MF1 (4-(2-(1-(2-chlorophenyl)-5-phenyl-1H-pyrazol-3-yl)phenoxy) butanoic acid), which has a high affinity for FABP3 [25,26]. MF1 significantly attenuates loss of dopaminergic neurons, behavioral impairments and α-synucleinopathy-like pathologies observed in MPTP-treated and/or α-synuclein PFF injected mice [23,26]. These results suggest that FABP3 is a potential molecular target producing novel therapeutics for α-synucleinopathies. Our off-target analysis showed that MF1 has an affinity for the GABAA receptor, but its effect on the GABAergic system remains unclear.
Here, we test whether MF1 affects GABAA receptor function using the whole cell patch-clamp technique on Neuro2A cells that overexpress the GABAA receptor. We also validate the anti-epileptic effect of MF1 in pilocarpine (PILO)-induced status epilepticus (SE) and pentylenetetrazol (PTZ)-induced epilepsy in mice. Our results suggest that MF1 is able to enhance the GABAA receptor activity through the benzodiazepine recognition site, thereby demonstrating anticonvulsant-like effects.

In the present study, we demonstrated that the FABP3 ligand MF1 promotes GABA currents in GABAA receptor-expressing cells. MF1 also exhibits anti-epileptic effects on PILO-induced SE in mice. These effects of MF1 were blocked by treatment with flumazenil, suggesting that MF1 enhances GABAA receptor function directly via the benzodiazepine recognition site.
Here, we show that MF1 enhances GABA currents arising from the GABAA receptor complex with α1β2γ2 subunits, which is the major complex found in the brain (approximately 60% of all GABAA receptors) [13]. However, the effects of MF1 on other types of GABAA receptors is unclear. Since MF1-promoted GABA currents were completely blocked by flumazenil, we propose that MF1 enhances the function of at least the αβγ-type benzodiazepine sensitive GABAA receptor.
Benzodiazepine receptor agonists act on not only the GABAA receptor, but also delayed rectifier K+ channels. Midazolam behaves like an open-channel inhibitor with a rapid onset of blocking and without frequency dependence on the block for the delayed rectifier K+ channels, thereby inhibiting the amplitude of action potentials in NSC-34 neuronal cells [30,31]. This effect is not blocked by flumazenil [31], suggesting that the benzodiazepine receptor agonist has the possibility of suppressing neuronal excitabilities, in vivo and independently of GABAergic action. As the MF1 here shows benzodiazepine receptor agonist-like effects, it may also affect the electrophysiological properties of delayed rectifier K+ channels. We will try to investigate the effect of MF1 on the delayed rectifier K+ currents in a future study.
Acute DZP (5.0 mg/kg, i.p.) treatment significantly attenuated the epileptic seizures observed in both PILO- and PTZ-treated mice. However, the acute administration of MF1 (0.3 and 1.0 mg/kg, p.o.) failed to inhibit PTZ-induced GTCs and mortality. Assuming that the anti-epileptic effects of DZP and MF1 arise from similar mechanisms of action, given that they both bind to the benzodiazepine recognition site, this result suggests that DZP may be a more powerful enhancer of the GABAA receptor function than MF1 in mouse brain. PILO leads to aberrant excitability, followed by the generation of seizures by stimulating the muscarinic acetylcholine receptor [32,33,34], while PTZ induces epileptic seizures by antagonizing GABAA receptor via the picrotoxinin-sensitive site [35,36]. Thus, acute MF1 (1.0 mg/kg, p.o.) administration appears to be insufficient to enhance the activity of the GABAergic system in the background of the impaired GABAA receptor function in PTZ-treated mice. However, a recent report indicates that fatty acid amides, with an affinity for FABPs, show anti-epileptic action in PTZ-treated mice, an effect blocked by flumazenil [37]. Further studies are necessary to investigate the effect of MF1 on other types of GABAA receptors.
The chronic administration of MF1 also attenuated PILO-induced SE and mortality. Since MF1 has a long half-life of not less than 20 h, the concentration of MF1 in the brain by chronic administration is sufficient to enhance GABAA receptor activity in the background of PILO treatment. We have previously reported that deletion of FABP3 upregulates GABAergic transmission by increasing the expression levels of the GABA, synthesizing enzyme glutamic acid decarboxylase 67 (GAD67), thereby suppressing excitability in the mouse anterior cingulate cortex [38,39]. Hence, chronic administration of MF1 may also promote the GABAergic system activity in the cortex by increasing GAD67 expression. We plan to assess the chronic effects of MF1 on GAD67 levels in the future.
While DZP is the drug of choice for the treatment of early SE, for acute repetitive seizures and febrile seizure prophylaxis [40,41], it has many side effects such as somnolence, depression, nausea, motor coordination disorder, and dizziness [41]. Moreover, repeated DZP treatment leads to the development of benzodiazepine tolerance and withdrawal syndrome, making it unsuitable for long-term epilepsy therapy [40,41]. Chronic administration (at least once a day for seven consecutive weeks) of MF1 (1.0 mg/kg, p.o.) did not affect motor and cognitive function in mice [23,26]. While the tolerance and withdrawal of MF1 should be analyzed, we hope that MF1 may be a safer alternative for long-term therapy.
We originally developed MF1 as therapeutic candidate for α-synucleinopathies [23,26]. MF1 attenuates aggregation and spreading of α-synuclein by preventing interactions between FABP3 and α-synuclein [23,26], suggesting that MF1 has the potential for early treatment of α-synucleinopathies. Patients with DLB cause seizures (14.7%) and myoclonus (58.1%) after disease onset, indicating that the seizure incidence rates are approximately 10-fold, relative to healthy controls [42,43]. Therefore, MF1 may be effective in alleviating not only core symptoms, but peripheral symptoms as well.
In conclusion, we have highlighted the pharmacological properties of MF1 on the GABAergic inhibitory system. Like the benzodiazepine agent DZP, MF1 may enhance function of the GABAA receptor, and in turn, suppress epileptic seizures in PILO-treated mice. Therefore, we suggest MF1 as an attractive therapeutic candidate for neurodegenerative disorders with epilepsy, including α-synucleinopathies.

Male ICR mice were purchased from Clea Japan, Inc. (Tokyo, Japan). Adult male mice (8–10 weeks old, weight 30–45 g) were used for all the experiments. Animals were housed under conditions of constant temperature 23 ± 2 °C and humidity 55 ± 5%, in a 12 h light–dark cycle (light: 9 am–9 pm). The mice had free access to food and water. All experimental procedures using animals were approved (2019 PhA-024, 1st April 2019) by the Committee on Animal Experiments at Tohoku University. We made an effort to reduce animal suffering and to use the minimum number of mice.

For administration to the animals, scopolamine hydrobromide (cholinergic inhibitor), DZP, PILO (muscarinic cholinergic agonist), and PTZ (GABAA receptor antagonist) (Sigma-Aldrich, St Louis, MO, USA) were dissolved in saline (0.9% NaCl). Flumazenil (Wako Pure Chemicals, Osaka, Japan) was prepared with 0.05% Tween-80 in saline. MF1 was synthesized as described previously [44] and suspended in 0.5% carboxymethylcellulose sodium salt (CMC). Doses of DZP (5.0 mg/kg, i.p.) and flumazenil (25 mg/kg, i.p.) were chosen, since these doses are enough to work in vivo without the influence of normal animal conditions [28].
For patch-clamp recording, GABA (Wako Pure Chemicals) was dissolved in distilled water. MF1 and flumazenil were suspended in dimethyl sulfoxide (DMSO) to achieve final concentrations of 0.1–0.01% for the assay.

To assay the anti-epileptic effect of MF1, we utilized PILO- and PTZ-induced epileptic mice. To assess the acute drug effects, some animals were treated with MF1 (0.1, 0.3 and 1.0 mg/kg, p.o.) and DZP (5.0 mg/kg, i.p.) 30 min before injection with PILO (300 mg/kg, i.p.) or PTZ (90 mg/kg, i.p.). The competitive inhibitor of GABAA receptor, flumazenil (25 mg/kg, i.p.) was administered 5 min prior to treatment with MF1 (0.3 mg/kg, p.o.) and DZP (5.0 mg/kg, i.p.). To assess the chronic drug effects, the same doses of MF1 and DZP were administered once a day for seven consecutive days before PILO injection. Animal experimental schedules are shown in Figure 2A.

To suppress the peripheral cholinergic side effects, mice were pre-treated with scopolamine (1.0 mg/kg, i.p.) 30 min prior to PILO (300 mg/kg, i.p.) injection. Each mouse was placed in a plastic cage and its behavior was recorded for 90 min after PILO injection. The seizure stages of the mice were evaluated, based on the following Racine scale score (1972) [47]: 0- No behavioral seizures; 1-Mouth and facial movements; 2-Head myoclonus; 3-Forelimb myoclonus; 4-Forelimb myoclonus followed by rearing; 5-Falling or generalized tonic–clonic convulsions. If mice died during these 90 min, the Racine scale score was assigned as stage 5. Stages 3–5 are defined as convulsive seizures [48,49]. Mice that exhibited intermittently persistent stage 3–5 seizures at least three times within 90 min of PILO injection were considered to undergo SE. SE onset time was measured as the time of the first observation of convulsive seizures. To terminate SE, all the animals were treated with DZP (5 mg/kg, i. p.), which was repeated, if needed, to suppress convulsions. To minimize suffering, moistened rodent chow and an injection of 2 mL of 5% glucose were given to all the mice for 5 days after SE.

Investigation and data analysis, Y.Y., J.L., I.K., H.I., Y.S. and N.S.; Technical support and supply of pcDNA plasmids encoding rat GABAA receptor subunits, K.K. and S.U.; Writing the manuscript, Y.Y., N.S. and K.F.; Designing the study, K.F. All authors have read and agreed to the published version of the manuscript. 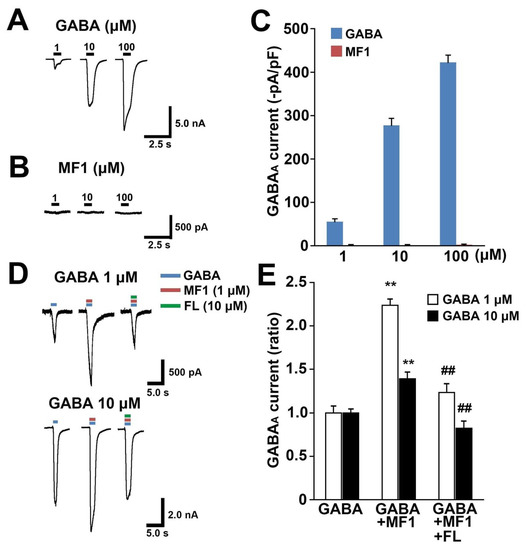 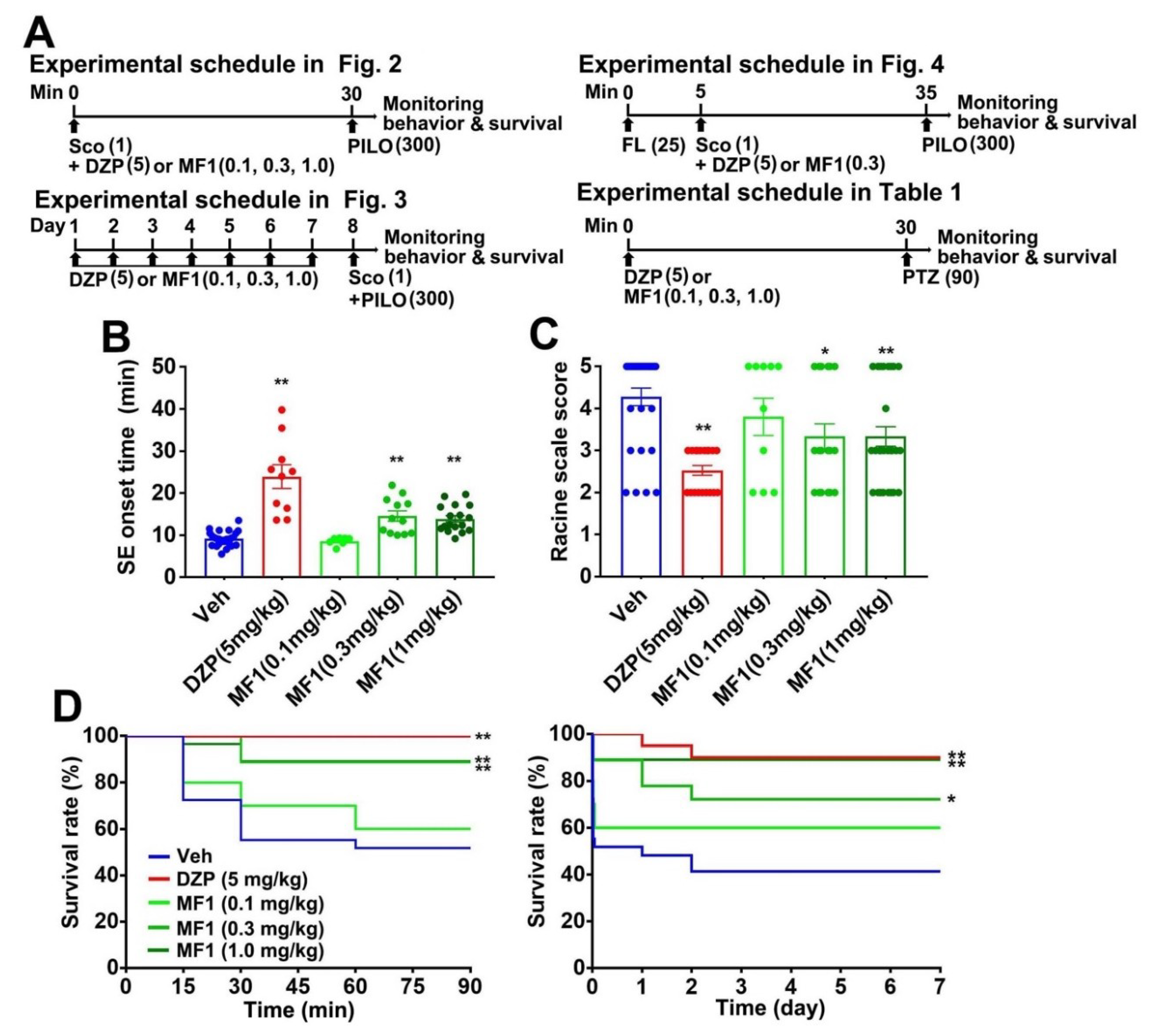