Time-Restricted G-Protein Signaling Pathways via GPR176, Gz, and RGS16 Set the Pace of the Master Circadian Clock in the Suprachiasmatic Nucleus

Matteo A. Russo
3 and

Cardiomyopathies are myocardial disorders in which heart muscle is structurally and/or functionally abnormal. Previously, structural cardiomyocyte disorders due to adrenal diseases, such as hyperaldosteronism, hypercortisolism, and hypercatecholaminism, were misunderstood, and endomyocardial biopsy (EMB) was not performed because was considered dangerous and too invasive. Recent data confirm that, if performed in experienced centers, EMB is a safe technique and gives precious information about physiopathological processes implied in clinical abnormalities in patients with different systemic disturbances. In this review, we illustrate the most important features in patients affected by primary aldosteronism (PA), Cushing’s syndrome (CS), and pheochromocytoma (PHEO). Then, we critically describe microscopic and ultrastructural aspects that have emerged from the newest EMB studies. In PA, the autonomous hypersecretion of aldosterone induces the alteration of ion and water homeostasis, intracellular vacuolization, and swelling; interstitial oedema could be a peculiar feature of myocardial toxicity. In CS, cardiomyocyte hypertrophy and myofibrillolysis could be related to higher expression of atrogin-1. Finally, in PHEO, the hypercontraction of myofilaments with the formation of contraction bands and occasional cellular necrosis has been observed. We expect to clear the role of EMB in patients with cardiomyopathies and adrenal disease, and we believe EMB is a valid tool to implement new management and therapies. View Full-Text
Keywords: cardiomyopathy; endomyocardial biopsy; primary aldosteronism; Cushing’s syndrome; pheochromocytoma; adrenal disease cardiomyopathy; endomyocardial biopsy; primary aldosteronism; Cushing’s syndrome; pheochromocytoma; adrenal disease
►▼ Show Figures 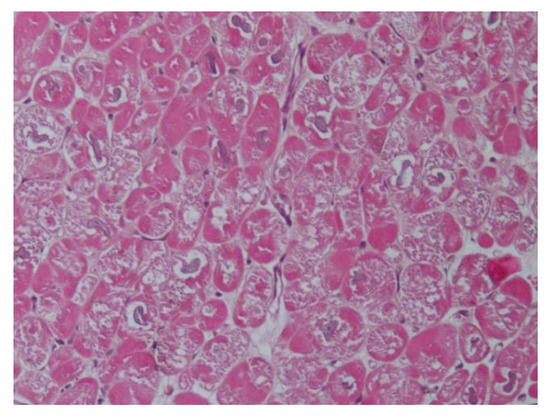