The vascular system is critical infrastructure that transports oxygen and nutrients around the body, and dynamically adapts its function to an array of environmental changes. To fulfil the demands of diverse organs, each with unique functions and requirements, the vascular system displays vast regional heterogeneity as well as specialized cell types. Our understanding of the heterogeneity of vascular cells and the molecular mechanisms that regulate their function is beginning to benefit greatly from the rapid development of single cell technologies. Recent studies have started to analyze and map vascular beds in a range of organs in healthy and diseased states at single cell resolution. The current review focuses on recent biological insights on the vascular system garnered from single cell analyses. We cover the themes of vascular heterogeneity, phenotypic plasticity of vascular cells in pathologies such as atherosclerosis and cardiovascular disease, as well as the contribution of defective microvasculature to the development of neurodegenerative disorders such as Alzheimer’s disease. Further adaptation of single cell technologies to study the vascular system will be pivotal in uncovering the mechanisms that drive the array of diseases underpinned by vascular dysfunction. View Full-Text
Keywords: vasculature; atherosclerosis; single cell technologies; neurodegeneration; inflammation vasculature; atherosclerosis; single cell technologies; neurodegeneration; inflammation
►▼ Show Figures 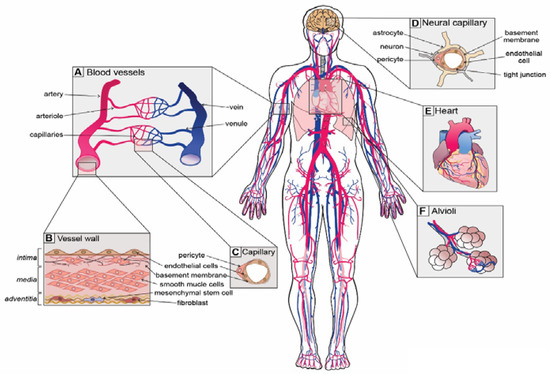