Dental universal adhesives are considered an useful tool in modern dentistry as they can be used in different etching techniques, allow for simplified protocol and provide sufficient bond strength. However, there is still no consensus as to their toxicity towards pulp. Thus, the present study aimed to evaluate the cytotoxicity and genotoxicity of three universal adhesives: OptiBond Universal, Prime&Bond Universal and Adhese in an in vitro experimental model, monocyte/macrophage cell line SC (ATCC CRL-9855). The cytotoxicity was measured by means of XTT assay, whereas the genotoxicity (comet assay) was evaluated based on the percentage of DNA present in the comet tail. Furthermore, the ability of the adhesives to induce apoptosis was analyzed using flow cytometry (FC) with the FITC annexin V/propidium iodide (PI) double staining. The analysis of the cell cycle progression was performed with FC using PI staining. OptiBond Universal presented significant, while Prime&Bond Universal and Adhese Universal had minimal cytotoxicity and genotoxicity towards human SC cells. Moreover, only OptiBond Universal increased the level of apoptosis in SC cell line. None of the adhesives showed significant cell cycle arrest, as revealed by FC analysis. Due to substantial differences in toxicity in in vitro studies of dental adhesives, there is a great need for further research in order to establish more reliable test protocols allowing for standardized methodology.
Keywords: dental materials; dental universal adhesives; cytotoxicity; genotoxicity; flow cytometry dental materials; dental universal adhesives; cytotoxicity; genotoxicity; flow cytometry

2.1. Analysis of the Cytotoxicity of the Dental Universal Adhesives

Obtained XTT assay outcomes showed significant differences in the cytotoxic properties of the investigated compound eluates. Monocyte/macrophage peripheral blood SC (ATCC CRL-9855) cells were incubated with the investigated compounds for 24 h. The obtained results showed that only OptiBond Universal significantly decreased their viability. Both in the case of Prime&Bond Universal and Adhese Universal, no significant changes of cell viability were observed (Figure 1).

2.2. Analysis of the Genotoxicity of the Dental Universal Adhesives

In order to assess activation of apoptosis in the SC cell line after exposure to OptiBond Universal, Prime&Bond Universal and Adhese Universal, the FITC annexin V/propidium iodide (PI) double staining and subsequently FC analysis were performed. The 34.96% of SC cells treated with 1-µM staurosporine for 16 h underwent apoptosis than control cells cultured in complete medium for 24 h. After 24 h incubation, only in the case of OptiBond Universal the apoptosis was induced in SC cells (approximately 45% of cells were at the early and late stages of apoptosis) (Figure 3). Prime&Bond Universal and Adhese Universal did not evoked a significant activation of apoptotic cell death in the investigated cell line. In addition, there was no increase in the level of necrotic cells after exposure to each of the tested adhesive systems.

2.4. Analysis of the Cell Cycle Progression by PI Staining of the Dental Universal Adhesives

All investigations were performed in in vitro experimental model using a commercially available monocyte/macrophage peripheral blood cell line—SC (ATCC CRL-9855) purchased from the American Type Culture Collection (ATCC; Manassas, VA, USA). Cell culture were maintained under standard conditions (37 °C; 5% pCO2; 95% humidity), according to the guidelines provided by the vendors. Cells were cultured in Iscove’s Modified Dulbecco’s Medium (IMDM) with 4-mM l-glutamine adjusted to contain 1.5 g/L sodium bicarbonate and supplemented with 0.05-mM 2-mercaptoethanol, 0.1-mM hypoxanthine and 0.016-mM thymidine (90%); fetal bovine serum (10%).
The amount of 50 µL of each investigated dental bonding system was placed in round bottom of Eppendorf tubes and polymerized (LED lamp intensity over 1000 mw/cm2, The CURE-TC-01, Spring Health Products, PA, USA) according to the manufacturer’s instructions. Then 1 mL of medium was added and incubated for 24 h at 37 °C. The obtained eluate, after centrifugation, was prepared for further experiments.

The cytotoxicity of the investigated compounds was measured using the XTT colorimetric assay (Thermo Scientific, Waltham, MA, USA). XTT is used to assess cells’ viability as a function of redox potential. Actively metabolizing cells reduce the tetrazolium salt (XTT) to an orange water-soluble formazan. All of the experiments were performed in triplicate with similar results. Test samples were prepared in 96-well plates by adding up to 50 µL (8 × 103 cells/well) of cell suspension in complete medium, 50 µL of prepared eluate. The positive control constitutes cells suspended in 96% isopropyl alcohol, that high concentrations are highly toxic to cells leading to their lysis, whereas the negative control cells cultured in a complete medium. The analyzed samples were incubated for 24 h. Subsequently, 25 µL of XTT/PMS mixture was added to each well. After 4 h incubation, absorbance was measured at a wavelength of 450 nm using Synergy HT (BioTek) spectrophotometer.

The genotoxicity of analyzed compounds was assessed using a comet assay. Comet assay is a sensitive and rapid technique for quantifying and analyzing DNA damage in individual cells. Assays were prepared in 12-well plates by adding 5 × 104 cells in 500 µL of complete medium and 500 µL of previously prepared eluates. Cells suspended in 100% DMSO (Sigma-Aldrich Corp., St. Louis, MO, USA), that high concentrations are highly toxic to cells leading to their lysis, were used as a positive control, whereas cells suspended in 1 mL of complete culture medium as a negative control. All samples were incubated for 24 h. Cell suspension in 0.37% LMP agarose (Sigma-Aldrich Corp., St. Louis, MO, USA) was placed on microscope slides previously coated with NMP agarose (Sigma-Aldrich Corp., St. Louis, MO, USA). Preparations were incubated in lysis buffer at pH 10 (2.5-M NaCl, 10-mM Tris, 100-mM EDTA) containing TritonX-100 (Sigma-Aldrich Corp., St. Louis, MO, USA) at a final concentration of 1% at 4 °C for 60 min. After 1 h incubation, the preparations were incubated 20 min in development buffer (300-mM NaOH, 1-mM EDTA) at 4 °C, followed by electrophoresis (32 mA, 17 V, 20 min) at 4 °C in electrophoretic buffer (30-mM NaOH, 1-mM EDTA). After staining with a DAPI fluorescent dye, preparations were analyzed under a fluorescent microscope. Cell damage was evaluated based on the percentage of DNA in the comet tail.

Apoptotic cell death induced by filtrates of test compounds was assessed using FITC Annexin V Apoptosis Detection Kit I purchased from BD Pharmingen™ (ApoAlert Annexin V, Clontech, California, USA). This method is based on high affinity of Annexin V to phosphatidylserine which, as a result of induction of apoptosis, is translocated to the outer parts of the cell membrane as well as on the propidium iodide (PI) that constitutes a marker of cell membrane permeability. SC cells (1 × 106 cells/well) plated on 12-well plates were incubated with previously prepared compounds filtrates diluted in ratio 1:1 with medium for 24 h. Cells treated with staurosporine (Sigma-Aldrich Corp., St. Louis, MO, USA) at a concentration of 1 µM for 16 h constituted a positive control, whereas a negative control cells suspended in complete culture medium and incubated for 24 h. Subsequently cells were washed with cold PBS (Sigma-Aldrich Corp., St. Louis, MO, USA) twice and double stained with annexin V, as a marker of early apoptosis and PI as a marker of cell membrane disintegration, necrosis and late apoptosis. The percentage level of apoptotic cells was analyzed by FC using the Beckman Coulter CytoFLEX. The obtained data were analyzed using the Kaluza analysis 1.5 A software (Beckman Coulter).

Cell cycle analysis was carried out by FC using the propidium iodide (PI) staining. Cells were seeded on 12-well plates (1 × 106 cells/well) and incubated with the previously prepared compounds eluate diluted in ratio 1:1 with medium for 24 h. Cells treated with 1 µM nocodazole (Sigma-Aldrich Corp., St. Louis, MO, USA) for 16 h served as a positive control, whereas cells cultured in complete medium for 24 h as a negative control. Cells were washed twice with cold PBS (Sigma-Aldrich Corp., St. Louis, MO, USA) and fixed with ice-cold 70% ethanol at −20 °C for 20 min. Subsequently, cells were treated with RNase A DNase&Protease-free (10 mg/mL) (Canvax Biotech, Spain) and incubated at 37 °C for 1 h before staining with PI solution (10 μg/mL) (Sigma-Aldrich Corp., St. Louis, MO, USA. After 30-min incubation at 4 °C percentage of cell cycle distribution in each phase was assessed by FC using the Beckman Coulter CytoFLEX.

Statistical analysis was performed using the Mann–Whitney test in Sigma Plot (Systat Software, Inc.). Each of the analyzes in individual experiments was based on the results of three independent tests. The differences were statistically significant on the graphs as follows: * p < 0.05, ** p < 0.01, *** p < 0.001 versus negative control.

It may be concluded that universal bonding systems vary both in cytotoxic and genotoxic effect on human monocyte/macrophage peripheral blood SC cells. Prime&Bond Universal and Adhese Universal presented minimal toxic effect on human SC cells, while OptiBond Universal showed significant cytotoxic and genotoxic effect on SC cell line. Furthermore, only OptiBond Universal showed significant ability to induce apoptosis in SC cell line. None of the compounds showed an ability to arrest the cell cycle in G2/M phase. Studies concerning the cytotoxicity and genotoxicity of dental bonding systems vary in methodology and present different results. Therefore, there is a great need for establishing more reliable test protocols suitable for conducting standardized research on various dental materials including dental bonding systems. According to our results, studies concerning the biologic impact of dental bonding systems should be conducted using various tests including cytotoxicity, genotoxicity, apoptosis detection and cell cycle analysis studies. Colorimetric tests based on the cell metabolism may not provide a reliable result, since dental universal adhesives alter the color of the mixture which may have a significant impact on the obtained results. Thereby, the flow cytometry analysis in dental material research may provide more accurate evaluation and should be recommended by international standards such as ISO. Thus, the present study is the first that evaluate the dental bonding systems by multiple in vitro assays as well as suggest that currently used research techniques should be extended and incorporated into the standardization criteria.

The authors declare no conflict of interest. The funders had no role in the design of the study; in the collection, analyses or interpretation of data; in the writing of the manuscript or in the decision to publish the results. 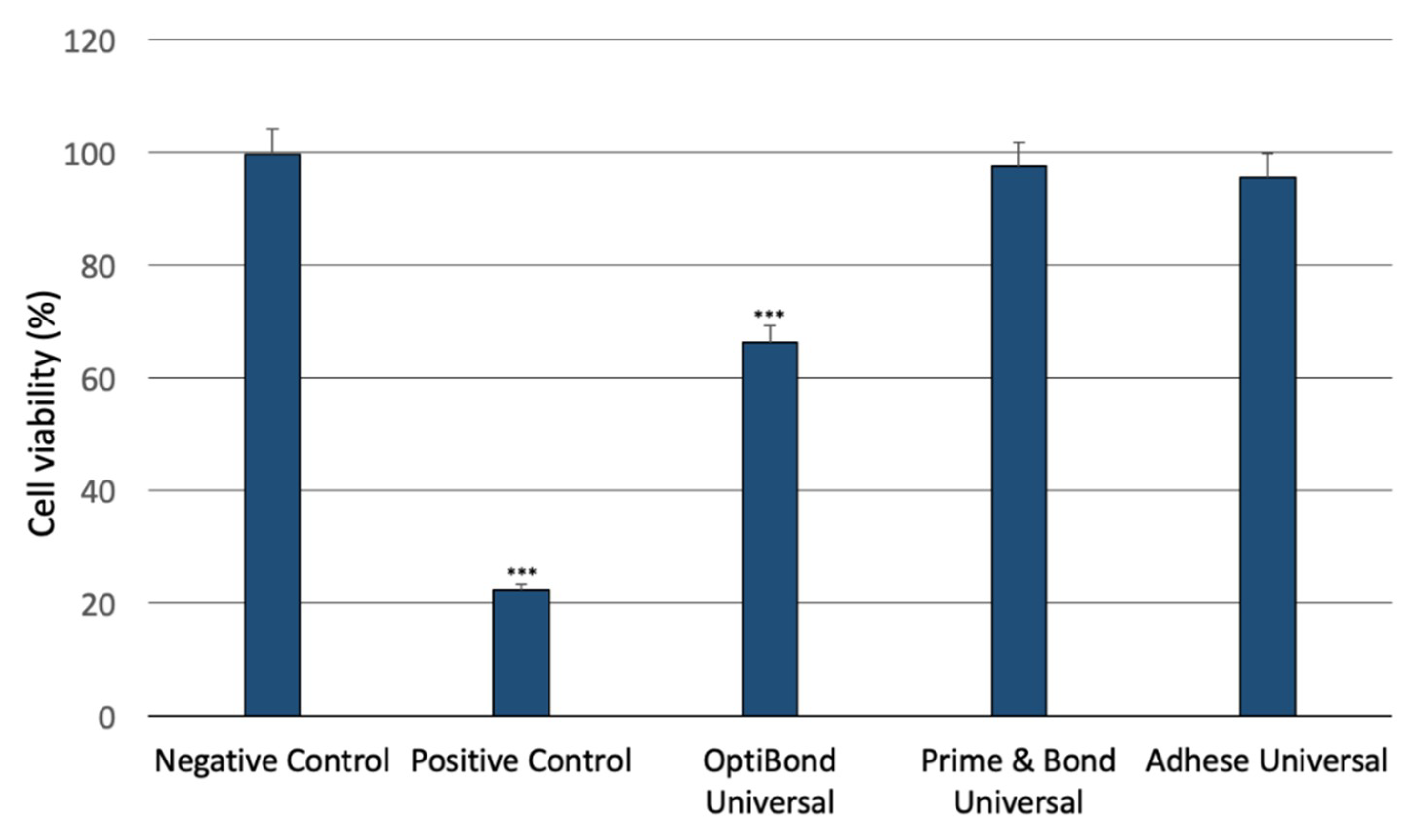 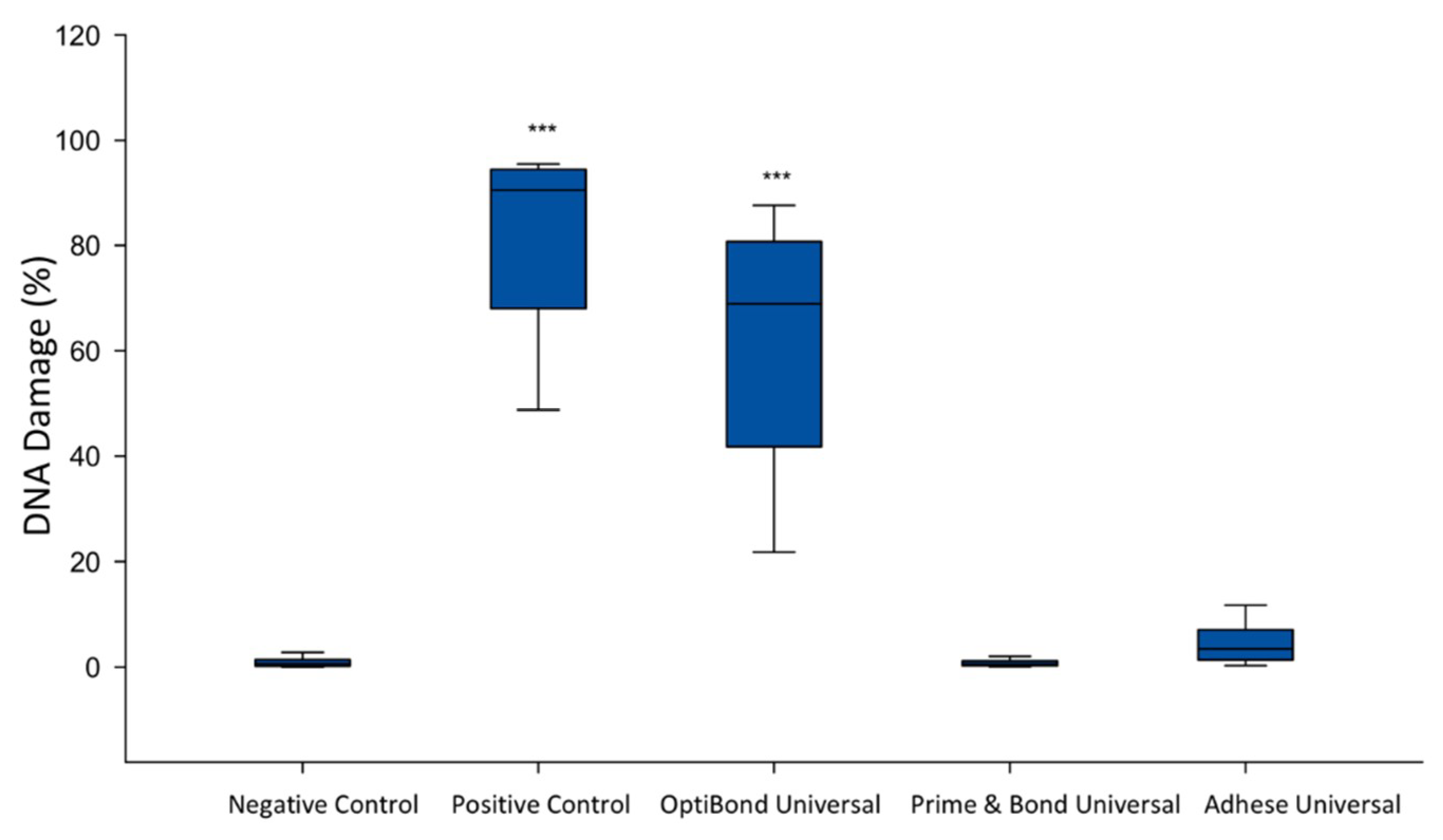 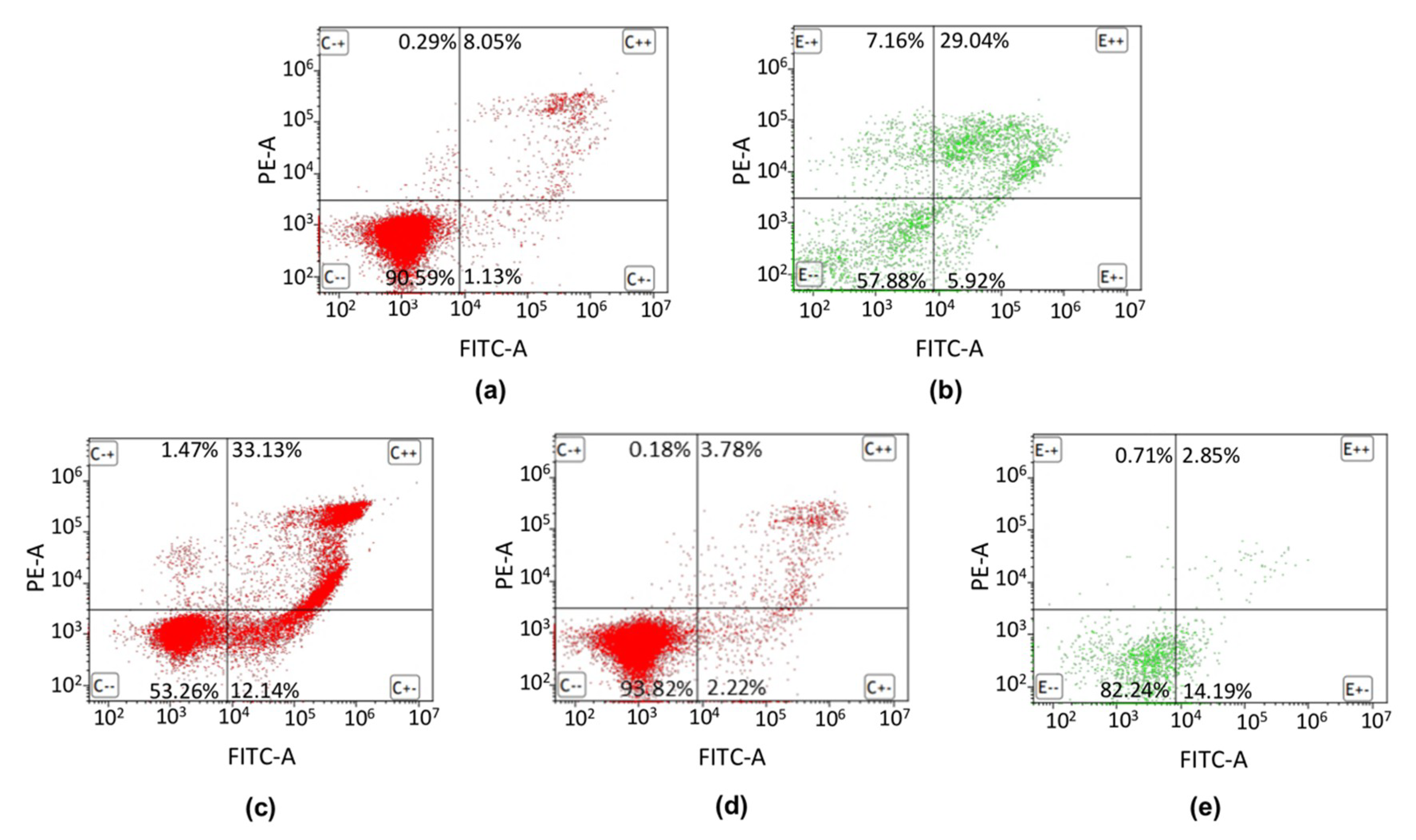 Table 1. Dental bonding systems.
Table 1. Dental bonding systems.
© 2020 by the authors. Licensee MDPI, Basel, Switzerland. This article is an open access article distributed under the terms and conditions of the Creative Commons Attribution (CC BY) license (http://creativecommons.org/licenses/by/4.0/).
We use cookies on our website to ensure you get the best experience. Read more about our cookies here.
Accept
We have just recently launched a new version of our website. Help us to further improve by taking part in this short 5 minute survey here. here.
Never show this again