Spontaneous intracerebral hemorrhage (ICH) accounts for 10–20% of all strokes, but are disproportionately responsible for 40% of case fatality and 60% of functional dependency after stroke [1]. Unfortunately, there are no effective radical therapies for restoring independence and quality of life after ICH. There are only conservative treatments including the control of blood pressure, osmotic therapy for perihematomal edema, and life-saving surgical management and rehabilitation [2].
It has been postulated that stem cell administration could alleviate the primary and secondary effects of ICH via anti-inflammation, anti-apoptosis, promotion of neurogenesis and angiogenesis, and tissue repair or replacement [3,4,5]. However, specific guidelines on the types, cell counts, effective time window, and route for administration of stem cell therapy in ICH treatment are not well established. Therefore, careful consideration of strategies for effective stem cell therapy is needed.
Of the various cell types investigated, embryonic stem cells (ESCs), neural precursors (NPs), and neural stem cells (NSCs) have become attractive tools for treating brain injury. In addition to the trophic effect and immunomodulatory power of stem cells, they could replace damaged cells via regenerating neural networks and restoring neurovascular functions following stroke [3,6,7,8]. Spherical neural masses (SNMs), which are an intermediate generation of human ESC-derived pure masses before differentiation into NPs, have several advantages of a sustainable and highly efficient differentiation ability. The advantages of SNMs which have homogeneity, long-term passage, high efficiency differentiation, ease of manipulation, storing, thawing, and production in large-scale made them potential candidates to treat human acute ICH [9,10].
Intravenous administration of stem cells is a feasible and practical method. However, the efficacy of delivery is limited since only a small number of injected stem cells migrate to the target organ [11,12]. For augmenting the innate capability of stem cells to migrate to target organs, the use of magnetically labeled stem cells in an external magnetic field has been investigated in ischemic stroke [13]. However, a magnetically targeted system under an external magnet exposure has never been studied in stem cell therapy for ICH.
Here, we investigated the potential of magnetosome-like ferromagnetic iron oxide nanocubes (FIONs)-loaded human ESC-derived SNMs to improve the transportation of stem cells to the brain, ameliorate brain damage from ICH, and recover the functional status after ICH, under an external magnetic field by a magnet attached to a helmet.

The experimental scheme is presented in Figure 1.

2.1. Determination of the Concentration of Iron Oxide Nanoparticles for Cell Labeling

2.2. Visualization of FIONs for Cell Labeling

To demonstrate the presence of SNMs labeled with FIONs, phase contrast optical imaging (Figure 3A,B) was performed for dissociated single SNMs with three-days incubation followed by a 4-h labeling with FIONs. The immunofluorescence imaging was performed on rhodamine B isothiocyanate (RITC)-conjugated FIONs (Figure 3C–F).

2.3. Measurement of Targeted Delivery of SNMs via Detection of FIONs by Prussian Blue Staining

At day 3 post-ICH induction, optical imaging of the Prussian blue staining of the slides to identify FION-labeled SNMs was observed in the animals injected with phosphate-buffered saline (PBS group), FION-labeled SNMs (SNMs* group), and the group of FION-labeled SNMs under a magnet-embedded helmet application for three days (SNMs*+Helmet group, Figure 4A). The relative Prussian blue-stained area was significantly greater in the SNMs*+Helmet group than in the PBS or SNMs* groups (2.3 ± 0.02 mm2 vs. 0.3 ± 0.01 mm2, p < 0.001 and 1.1 ± 0.01 mm2, p < 0.001; respectively). There was a significant difference between the PBS and SNMs* groups (p < 0.001) (Figure 4B).

2.4. Targeted Delivery of SNMs Attenuated Swelling after ICH, but Not Hematoma

2.8. Targeted Delivery of SNMs Enhanced the Neurological Function Recovery in the Early Stage

4.1. Differentiation of SNMs from Human ESCs

This study was approved by the institutional review board of the Seoul National University Hospital (IACUC No. 17-0075-C1A0). The SNMs were produced from the undifferentiated human ESC 43 line as described previously [9,14,15]. In brief, the pieces of undifferentiated SNU human ESC 43-line colonies were mechanically dissociated and cultured in a dish for 7 days to form embryoid bodies (EBs). The cultured EBs were attached to Matrigel-coated culture dishes and cultured to select neural structures consisting of NPs in media supplemented with 0.5% N2 for 5 days. The selected NPs were expanded to form rosette structures in an expansion media with basic fibroblast growth factor (Invitrogen, Carlsbad, CA, USA) and 1% N2 for another 4 days. These homogenous SNMs were purified and frozen. For labeling, SNMs were dissected every single SNM, as previously reported [16].

FIONs were synthesized as described previously [17]. The size of the FIONs used was 57.8 ± 9.9 nm. Single SNMs were incubated 3 days before labeling with FIONs. The 4-h incubation was required to label the cells with FIONs as described previously [17]. SNMs were treated with various concentrations (20, 40, and 80 µg/mL) of FIONs. The cytotoxicity of FIONs was evaluated using a CCK-8 assay (Enzo Life Sciences Inc., NY, USA) for 5 days (n = 6 for each group). After adding 10 µL of CCK-8 solution per well, plates were incubated at 37 °C for an additional 3 h. The absorbance was assayed at 450 nm using a Plate Reader (VersaMax™, Molecular Devices, San Jose, CA, USA). Relative cell viability was calculated as previously described. [33]
AFION and AControl were defined as the absorbance of the cells treated within various concentrations of FIONs and the control medium, respectively. SNMs incubated in the control medium were considered to be 100% viable compared with SNMs with FION-labeling (SNMs*). The FION content for injection was determined to be 40 µg/mL, based on the viability analysis.
To track SNMs labeling with FIONs, phase-contrast microscopy (ECLIPSE Ti, Nikon, Tokyo, Japan), preparation of RITC tagged FIONs, and immunofluorescent staining of cells were performed [33,34]. In brief, RITC was added to covalently bind 10 mg of FIONs in ethanol. After 8 h, the solution containing RITC-FION was centrifuged, washed with ethanol, and purified. The homogeneously purified single SNMs were incubated 3 days before labeling with RITC-FIONs, followed by 24-h incubation with RITC-FIONs. RITC-FION-SNMs were seeded on glass slides, followed by fixation in 4% formaldehyde. Each slide was washed with PBS (Sigma-Aldrich, St. Louis, MO, USA). The slides were incubated overnight at 4 °C with mouse monoclonal anti-human nuclei primary antibody to label the SNMs (1:100; Chemicon International, Temecula, CA, USA) as primary antibody, followed by incubation with the secondary antibody Alexa 488-conjugated goat anti-mouse IgG (1:200, Molecular Probes, Eugene, OR, USA) for 2 h at room temperature (22 ± 3 °C). Finally, the slides were counterstained with 4,6-diamidino-2-phenylindole (DAPI, Sigma, Taufkirchen, Germany) for cell nuclear staining. All slides were washed with PBS, and immunofluorescence was visualized and counted in the ipsilateral hemisphere using a laser scanning confocal microscope (ECLIPSE Ni-E, Nikon, Tokyo, Japan).

4.3. Induction of ICH, Intravenous Injection of FION-Labeled SNMs, and Application of a Magnet-Embedded Helmet for Targeted Delivery

At 42 days post-ICH induction, the rats were sacrificed and 1-mm-thick fresh brain slices were stained with triphenyl tetrazolium chloride for the measurement of hemispheric atrophy (n = 6 for each group). Total hemispheric brain volume was calculated by the summation of the hemispheric area in each section multiplied by the distance between sections via image analysis on digital photographs of the slices (Image J, version 1.51c, National Institutes of Health, Bethesda, MD, USA). Poststroke hemispheric atrophy volume was defined as described previously [42].

To determine whether the FION-labeled SNMs improved the motor deficit after ICH, behavioral tests were performed using a limb placement test on the day before induction of ICH, and on days 1, 3, 7, and 14 post-ICH induction (n = 6 for each group). The independent two raters (MK Kang and HJ Mo), who were masked to the group allocations, scaled the test. In the limb placement test, the rats were graded from 0 to 2 in each limb, as previously described: 0 points (placed limb normally), 1 point (placed limb with a delay of more than 2 s and/or incompletely), and 2 points (unable to place limb) [13]. The rats with a score of 8 indicated the most severe behavioral deficits after ICH; conversely, the rats with a score of 0 were considered normal.

Results are expressed as the mean ± standard deviation of the mean based on the statistics. Statistical significance was determined using a one-way ANOVA or ANCOVA followed by the post hoc Tukey’s multiple comparison analysis test when necessary. All analyses were performed using IBM SPSS Statistics 25 (SPSS Inc., Chicago, IL, USA) and GraphPad Prism version 7 (GraphPad Software, San Diego, CA, USA). Results with a probability lower than 0.05 were considered statistically significant.

In conclusion, we have developed a targeted delivery system using FION nanoparticles tagged to stem cells and a magnet-embedded helmet. The delivery of stem cells resulted in an attenuated inflammatory response in ICH. The injection of SNMs provides protective effects and minimizes the potential side effects. Thus, the targeted delivery of SNMs might have the potential for emerging therapeutic strategies for ICH.

This research was funded by Korean Health Industry Development Institute, grant number HI15C2311. The funding had no effects on results on studies. 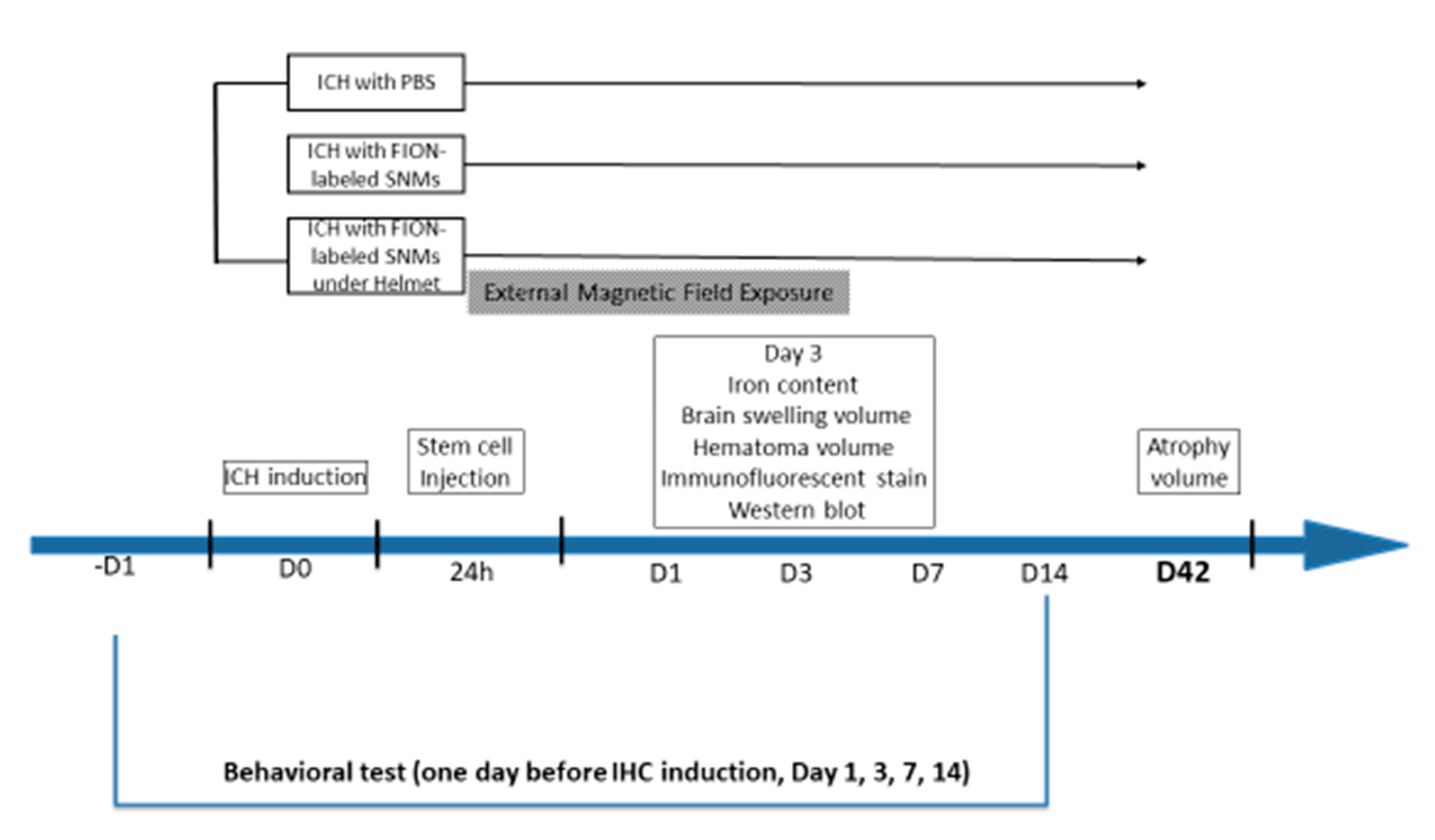 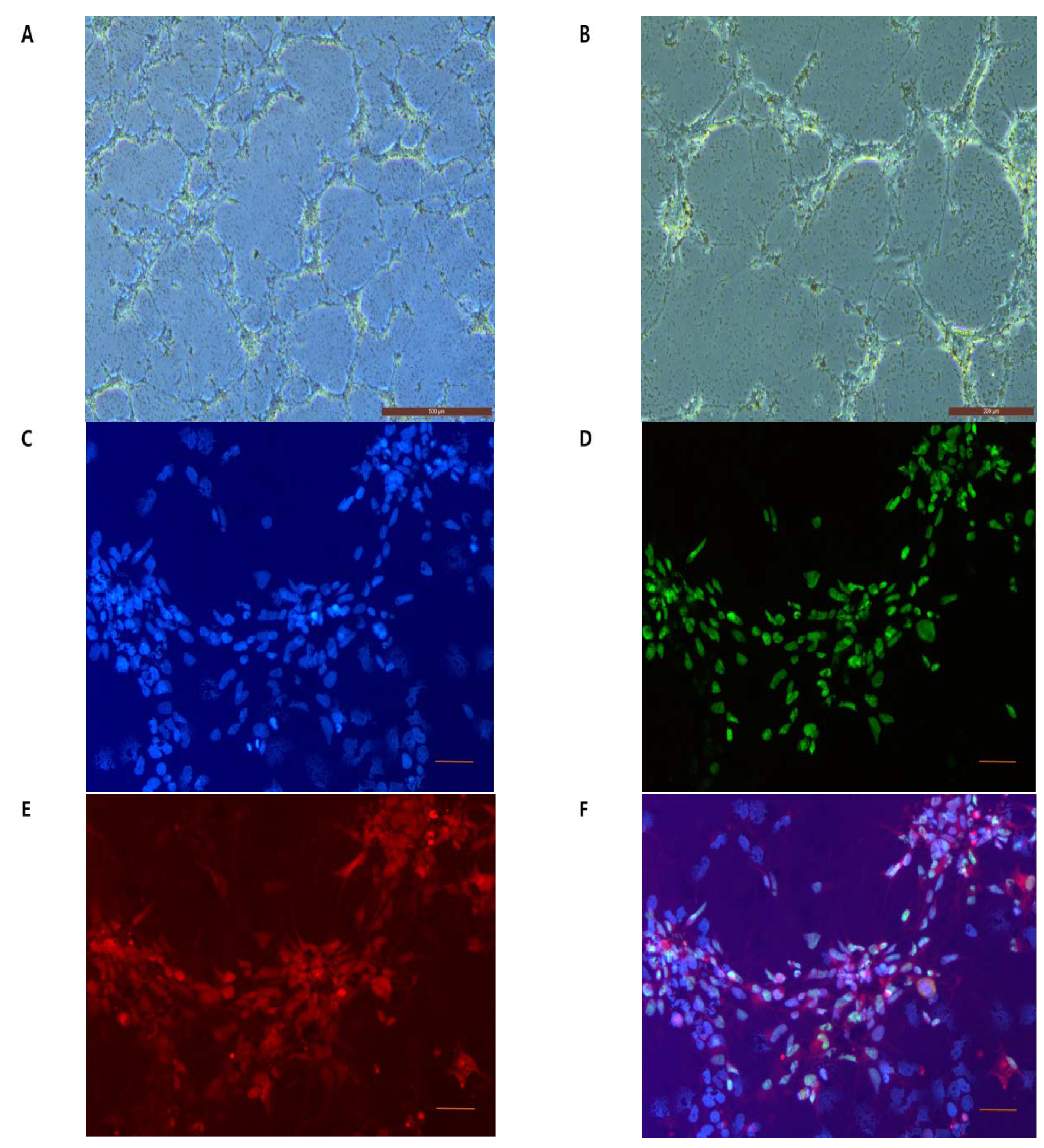 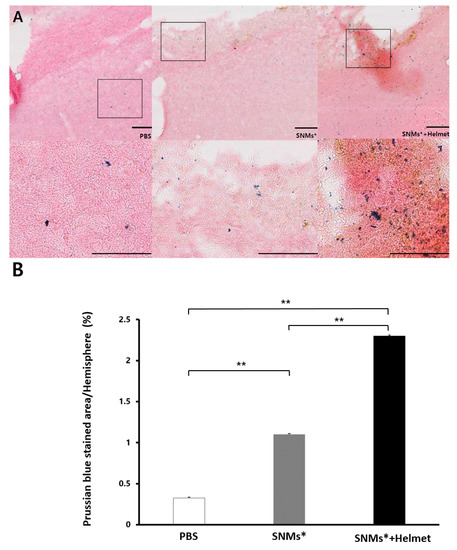 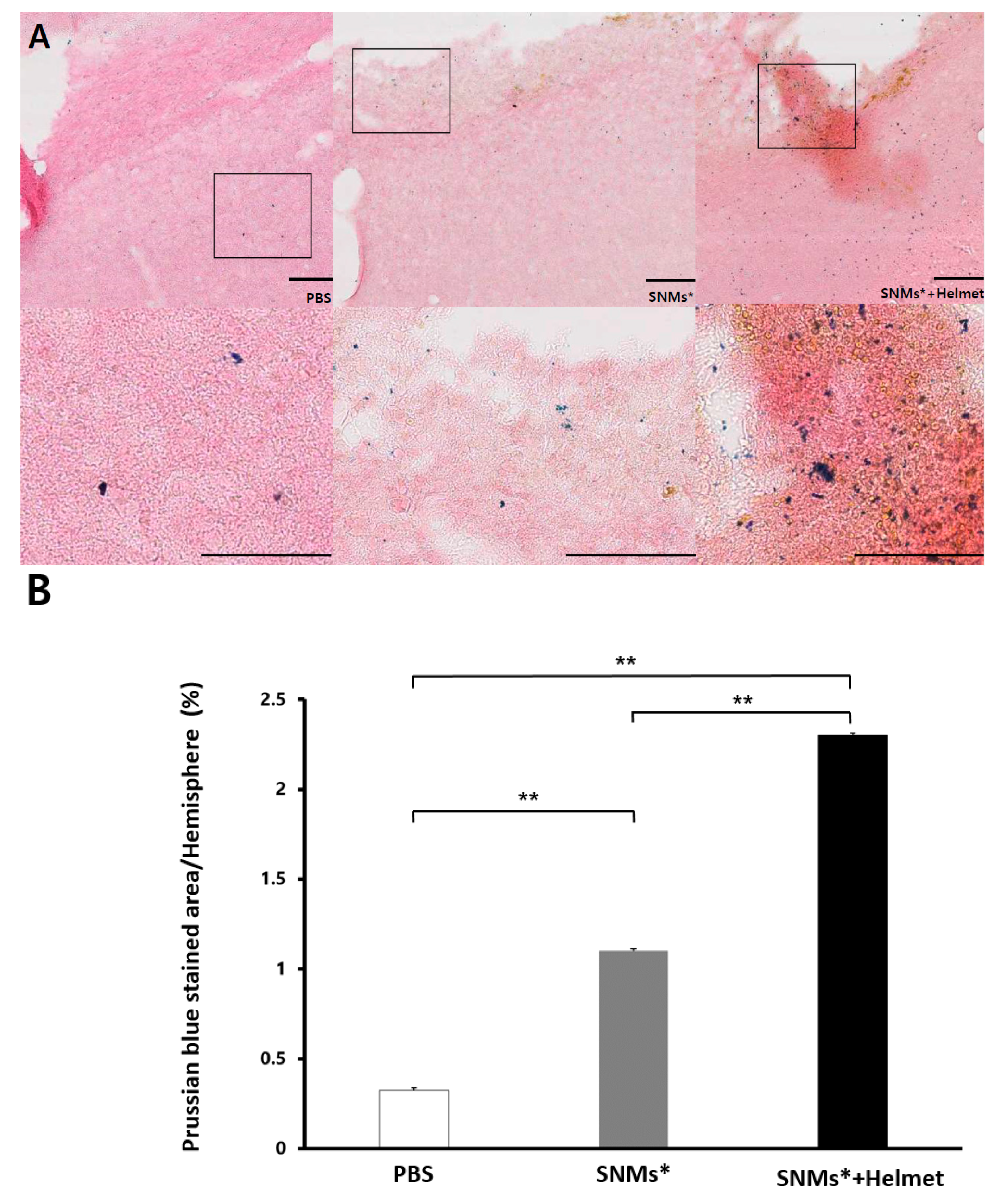 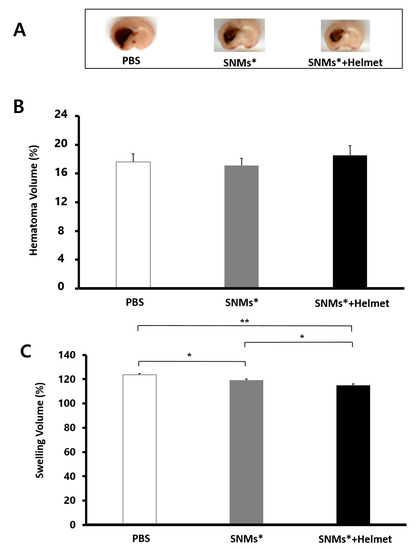 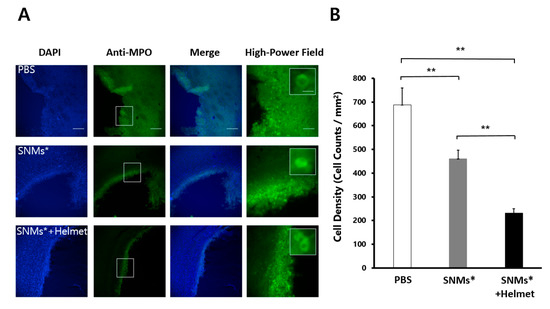 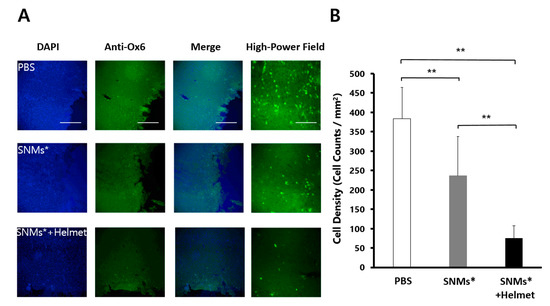 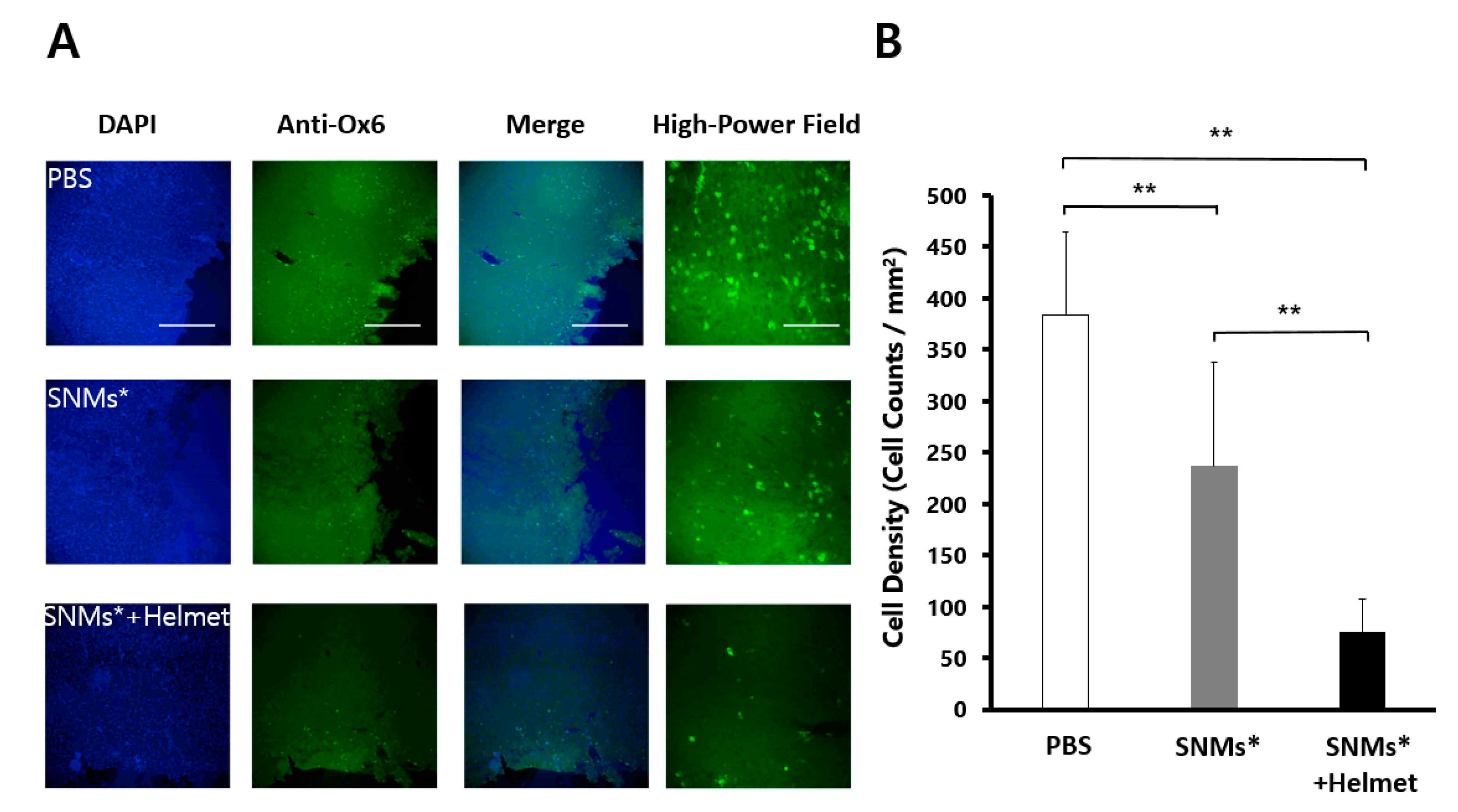 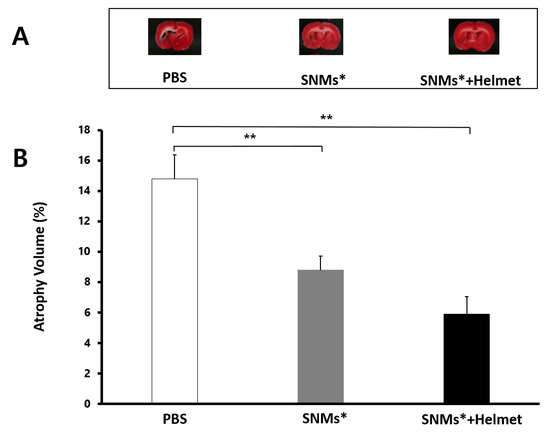 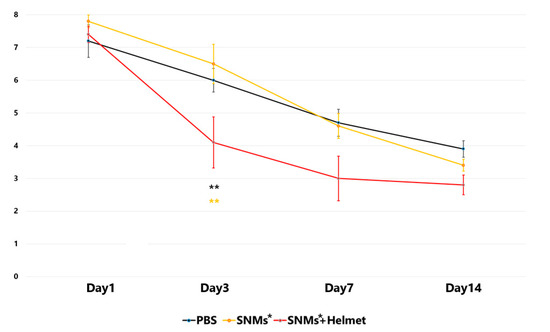 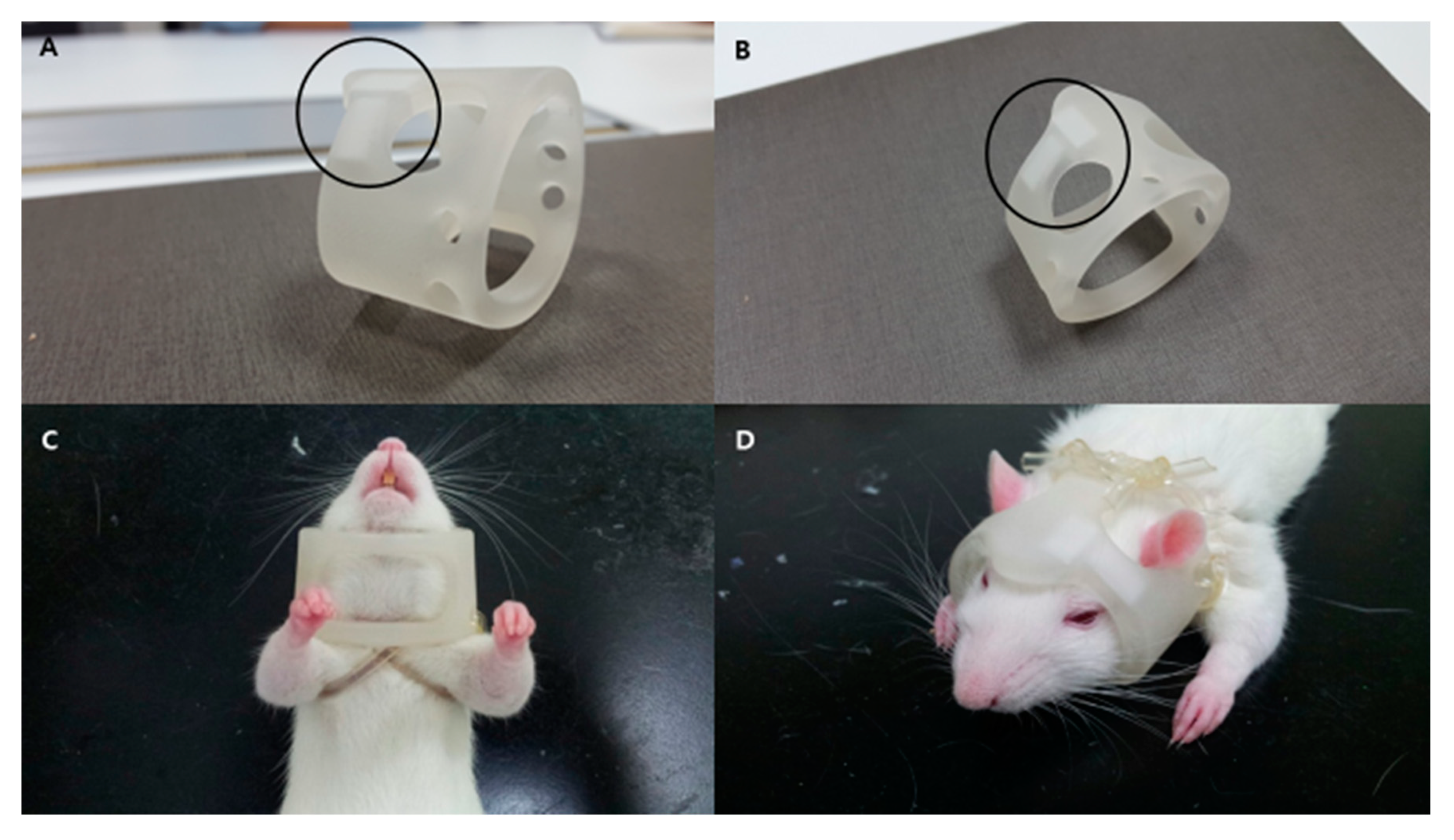