Are Leukaemic Stem Cells Restricted to a Single Cell Lineage?

Spermatocytes are among the most heat-sensitive cells and the exposure of testes to heat shock results in their Heat Shock Factor 1 (HSF1)-mediated apoptosis. Several lines of evidence suggest that pleckstrin-homology-like domain family A, member 1 (PHLDA1) plays a role in promoting heat shock-induced cell death in spermatogenic cells, yet its precise physiological role is not well understood. Aiming to elucidate the hypothetical role of PHLDA1 in HSF1-mediated apoptosis of spermatogenic cells we characterized its expression in mouse testes during normal development and after heat shock. We stated that transcription of Phlda1 is upregulated by heat shock in many adult mouse organs including the testes. Analyzes of the Phlda1 expression during postnatal development indicate that it is expressed in pre-meiotic or somatic cells of the testis. It starts to be transcribed much earlier than spermatocytes are fully developed and its transcripts and protein products do not accumulate further in the later stages. Moreover, neither heat shock nor expression of constitutively active HSF1 results in the accumulation of PHLDA1 protein in meiotic and post-meiotic cells although both conditions induce massive apoptosis of spermatocytes. Furthermore, the overexpression of PHLDA1 in NIH3T3 cells leads to cell detachment, yet classical apoptosis is not observed. Therefore, our findings indicate that PHLDA1 cannot directly contribute to the heat-induced apoptosis of spermatocytes. Instead, PHLDA1 could hypothetically participate in death of spermatocytes indirectly via activation of changes in the somatic or pre-meiotic cells present in the testes. View Full-Text
Keywords: apoptosis; detachment; heat shock; HSF1; PHLDA1; spermatogenesis apoptosis; detachment; heat shock; HSF1; PHLDA1; spermatogenesis
►▼ Show Figures 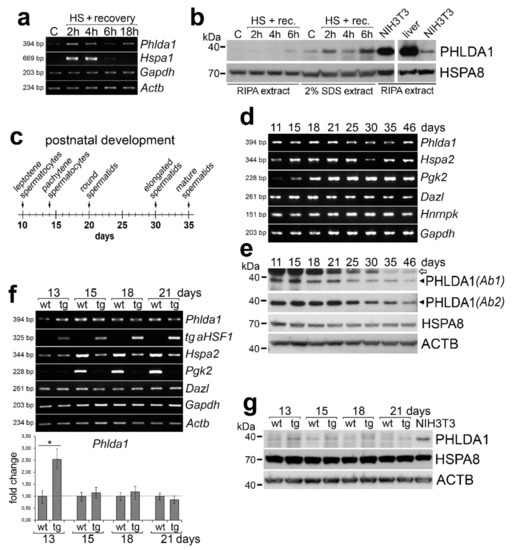