It is now widely believed that mammary epithelial cell plasticity, an important physiological process during the stages of mammary gland development, is exploited by the malignant cells for their successful disease progression. Normal mammary epithelial cells are heterogeneous and organized in hierarchical fashion, in which the mammary stem cells (MaSC) lie at the apex with regenerative capacity as well as plasticity. Despite the fact that the majority of studies supported the existence of multipotent MaSCs giving rise to both basal and luminal lineages, others proposed lineage restricted unipotent MaSCs. Consistent with the notion, the latest research has suggested that although normal MaSC subsets mainly stay in a quiescent state, they differ in their reconstituting ability, spatial localization, and molecular and epigenetic signatures in response to physiological stimuli within the respective microenvironment during the stages of mammary gland development. In this review, we will focus on current research on the biology of normal mammary stem cells with an emphasis on properties of cellular plasticity, self-renewal and quiescence, as well as the role of the microenvironment in regulating these processes. This will include a discussion of normal breast stem cell heterogeneity, stem cell markers, and lineage tracing studies. View Full-Text
Keywords: mammary stem cells; morphogenesis; epithelial plasticity; multipotent; unipotent mammary stem cells; morphogenesis; epithelial plasticity; multipotent; unipotent
►▼ Show Figures 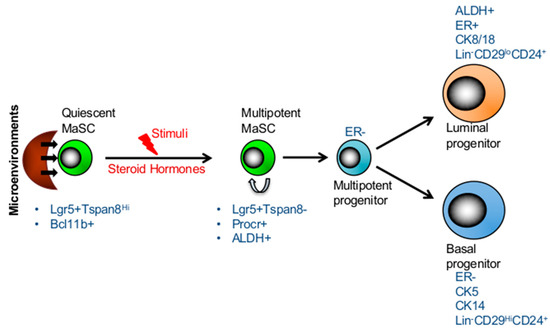