Computers and consumer electronics play important roles in modern society; however, the majority of these products use a liquid crystal display (LCD) as the screen with light-emitting diode (LED)-based backlight modules being widely used as the LCD light source. LEDs emit higher levels of blue light with shorter wavelengths than conventional light sources and are accompanied by an enhanced risk of photo-injury. Extensive blue light exposure also disrupts circadian rhythms [1], which may constitute a health hazard for humans. For example, nighttime lighting with blue light and the desynchronization of circadian rhythms may increase the incidences of psychiatric disorders, diabetes, obesity, and several kinds of cancers [2].
The photoreceptors and retinal pigment epithelial (RPE) cells of the retina comprise the main sites of light energy absorption [3,4]. It has been demonstrated that lights with shorter wavelengths induce more retinal damage than those with longer wavelengths [5,6,7,8]. In particular, LED-induced retinal photoreceptor and RPE cell damage have been observed in several animal studies [9,10], even at domestic lighting levels [11]. Epidemiologic and experimental evidence has further revealed that short-wavelength light exposure may also contribute to the pathogenesis of age-related macular degeneration (AMD) [12,13,14]. Notably, previous studies found that the mechanism of retinal injury is related to the generation of reactive oxygen species (ROS) and inflammatory reactions, which induce oxidative stress and cell apoptosis within the retina [15,16,17,18,19].
Light-induced retinal injury has received considerable research attention owing to the increasing societal exposure to display terminals that emit extensive levels of blue light. Nevertheless, although advances have been made related to treatments for e.g., nonexudative and exudative AMD, their effectiveness remains limited. In order to prevent light-induced damage of the retina and the alteration of circadian rhythms, blue light filters, blocking lenses, and blue light–filtering intraocular lenses have been widely used [20,21,22]. However, traditional filters or blocking lenses may decrease the luminance of light and reduce the contrast sensitivity and visual quality while performing visual tasks. Alternatively, as the severity of light-induced retinal damage is related to exposure time and the emitted energy, adjustment of the phosphor ratio of LED backlight modules in LCDs and modification of the visible light spectrum might allow maintenance of the luminance of the light source while reducing the energy exposure of the eye. Although the concept of tuning the emitted wavelength of LEDs in a smartphone LCD backlight to reduce the unhealthy effect of blue light has been suggested [23], the hypothesized effect was not confirmed by experiments. Therefore, identifying a method to alleviate the blue-light hazards while simultaneously maintaining the visual quality of the screen constitutes an important issue in environmental health perspectives.
In this study, we established a formula of the ocular energy exposure index (OEEI), which equals the total radiance of the LCD light spectrum divided by total luminance of the LCD. This index was similar to the concept of light hazard ratio in a previous study [24] and can be used as an indicator of LCD energy emission. We utilized 661W photoreceptor cell line as the model system, as these have been previously exploited in several studies of light-induced retinal damage [25,26,27,28,29]. We also modulated the emitted light spectrum and designed the LCDs with low, medium, and high OEEI value. The aim of this study was to investigate the cell viability, mitochondrial damage, ROS production, and apoptosis of photoreceptor cells upon exposure to LCDs with different OEEI values and elucidate the detailed mechanisms by which the emitted light spectrum leads to light-induced photoreceptor cell damage.

In order to determine the appropriate conditions for light-induced retinal photoreceptor cell damage, we investigated the viability of 661W with different duration (1, 2, and 3 days) and luminance (100, 200, and 300 nits) of LCD exposure. Cell viability was analyzed using alamarBlue assays. Cell viability decreased significantly on day 3 after exposure to 300 nits LCD (Figure 1). No significant cell death was observed upon exposure to LCDs with lower luminance.

We investigated the viability of 661W cells exposed to LCDs with different OEEI (low, medium, high) for 3 days. The luminance of all LCDs was 300 nits. Cell viability was analyzed using alamarBlue assays. Compared to the low OEEI group, cell viability decreased significantly after exposure to LCDs with medium and high OEEI (Figure 2). LCDs with higher OEEI induced increased levels of 661W cell death.

We analyzed the damage of 661w cells exposed to LCDs with different OEEI for 24 h using the Terminal deoxynucleotidyl transferase-mediated dUTP-biotinide end labeling (TUNEL) assay. Increased numbers of apoptotic cells appeared in the higher OEEI groups (Figure 3A). The number of TUNEL-positive cells increased markedly after exposure to LCDs with higher OEEI (Figure 3B).

As LCD exposure induced apoptosis in 661w cells in an OEEI intensity-dependent manner, we evaluated the expression of the apoptosis-related protein cleaved caspase-3 in 661W cells after exposure to LCD with low, medium, and high OEEI for 3 days. In medium and high OEEI groups, the cleavage forms of caspase-3 were obviously observed (Figure 7) whereas this form was not seen in the low OEEI group.

As exposure to LCD with higher OEEI upregulated the expression of proteins regulated by NF-κB, we further investigated the interaction between OEEI intensity and the NF-κB pathway. NF-κB binds to specific DNA sequences to activate downstream gene expression. Therefore, electrophoretic mobility shift assay (EMSA) was performed to study the DNA-binding activity of NF-κB in LCD-exposed 661W cells. Compared to that in the low OEEI group, DNA-binding activity was markedly increased and NF-κB pathway was activated in the medium and high OEEI groups (Figure 8).

The 661W cells were exposed to LCDs with luminance of 0,100, 200, and 300 nits for morphological observation and to determine the suitable luminance and duration for subsequent experiments. 661W cells were seeded on a 24-well plate at a density of 5 × 104/well, which was then placed on a special framework over the LCD (Figure 9). To ensure a stable growth environment for 661W cells, the device was placed inside the CO2 incubator. Temperature was maintained between 36.5 and 37.5 °C.

Cell viability was assessed using the alamarBlue assay (Thermo Fisher Scientific, Waltham, MA, USA), which comprises a resazurin-based solution that functions as a cell health indicator. 661W cells were seeded on 24-well plates at a density of 5 × 104/well, then 500 μL of alamarBlue was added to each well. Following incubation at room temperature in the dark for 4 h, 100 μL of supernatant from each well was transferred to a new 96-well plate. The absorbance was measured at a wavelength of 570 and 600 nm using a microplate reader (Bio-Rad Laboratories Inc., Hercules, CA, USA). Cell viability was estimated by normalizing the 570 nm value to the 600 nm value.

The TUNEL assay was performed using a FragELTM DNA fragmentation detection kit (Calbiochem, Darmstadt, Germany). Tissue sections were deparaffinized, rehydrated, and blocked using endogenous peroxidase with H2O2 for 30 min. Antigen retrieval was achieved by pressure-cooking in a 0.1 M citrate buffer at pH 6 for 10 min followed by cooling at room temperature prior to incubation with the enzyme. The TUNEL enzyme (1 h at 37 °C) and peroxidase converter (30 min at 37 °C) were applied to the 10-μm sections after incubation for 5 min in a permeabilizing solution of 0.1% Triton-X in 0.1% sodium citrate. The fluorescent signals were obtained by adding FITC-Avidin, which bound to the biotinylated-dU of the damaged DNA. After staining, image analysis was used to quantify the relative fluorescence intensity of the TUNEL-positive cells, with the number of TUNEL-stained nuclei quantified in four random slides per sample.

Intracellular ROS in 661W cells was measured using a ROS assay. This nonfluorescent probe accumulates within cells and transforms into 2′,7′-dichlorodihydrofluorescein (H2DCF) by deacetylation, and then reacts with ROS to form the fluorescent compound dichlorofluorescein (DCF). First, 661W cells were plated in Petri dishes. After exposure to the LCD for 3 days, 10 mM of 2′,7′-dichlorodihydrofluorescein diacetate (H2DCFDA, Sigma-Aldrich, St. Louis, MO, USA) was added to the medium for 30 min at 37 °C in the dark. After two rinses with PBS, cells were visualized by fluorescence microscopy at excitation/emission wavelengths of 548/573 nm. Quantitative analysis of the images was performed using image-processing software (Image-J; National Institutes of Health).

The mitochondrial membrane potential was measured using the JC-1 mitochondrial membrane potential assay kit (Cayman Chemical Company, Ann Arbor, MI, USA). The 661W cells cultured in 24-well plates were exposed to LCD with low, medium, and high OEEI. After 3 days of exposure, 50 μL of JC-1 staining buffer was added to 1 mL of culture medium. JC-1 forms J-aggregates in healthy cells and remains in its monomeric form in apoptotic or unhealthy cells. J-aggregates and JC-1 monomers can be detected using settings designed to detect Texas Red and FITC, respectively. The images were captured using a fluorescence microscope, which was used to detect healthy cells with mainly JC-1 J-aggregates (excitation/emission, 540/605 nm) and apoptotic or unhealthy cells with mainly JC-1 monomers (excitation/emission, 480/510 nm). The number of cells (red or green-stained cells) were counted in a blind manner using image-processing software (Image-J).

EMSA was performed with an NF-κB DNA-binding protein detection system (Pierce Biotechnology, Waltham, MA, USA) according to the manufacturer’s instructions. We incubated a 10 μg nuclear protein aliquot with a biotin-labeled NF-κB consensus oligonucleotide probe (5′-AGTTGAGGGGACTTTCCCAGGC-3′) for 30 min in binding buffer and then determined the specificity of the DNA/protein binding by adding a 100-fold molar excess of unlabeled NF-κB oligonucleotide for competitive binding 10 min before adding the biotin-labeled probe.

The values are shown as the means ± SD or median and the interquartile range in non-parametric tests. Statistical analysis for multiple comparisons in each study was determined by performing a Kurskal-Wallis test followed by post hoc Dunn test. Two-way analysis of variance (ANOVA) followed by Dunnett’s multiple comparisons test was used to examine the influence of luminance and duration of exposure on the cell viability. A p value ≤0.05 was considered significant. Statistical analysis was performed using SPSS software (version 17.0, SPSS Inc., Chicago, IL, USA).

The present study demonstrated that LCD exposure caused retinal photoreceptor cell damage that was correlated with the level of emitted energy, especially that of blue light. When LCDs emitted more energy; i.e., high OEEI LCD, the cell viability decreased to a greater degree and the percentage of apoptotic cells increased significantly. High energy light exposure induced the production of ROS, destroyed the mitochondrial function, activated the NF-κB pathway, and enhanced the expression of oxidative stress, inflammation, and apoptosis-related proteins. As consumer electronics are indispensable in daily life in the modern era of computing, the quest for increased image quality may be accompanied by higher energy emission of the light source, in turn resulting in more severe damage to the retina and enhancement of other blue light hazards such as circadian rhythm desynchronization. This represents a major societal health concern toward which traditional blue light filters and blocking lenses may be poorly suited, as consumers may be unwilling to sacrifice visual quality. Alternatively, in our present study, we modulated the visible light spectrum of the light source and reduced the emitted energy of the LCD. Consequently, the light-induced retinal photoreceptor cell damage was alleviated. LCDs with lower energy emission may, therefore, serve as more suitable screens to prevent light hazards to the human eye. 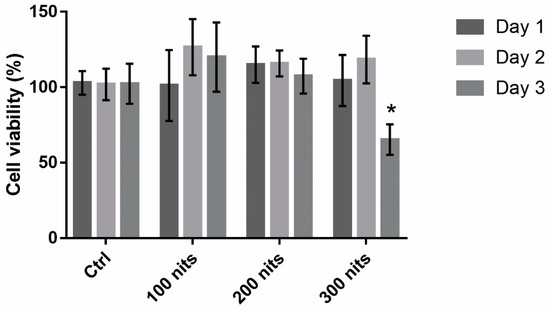 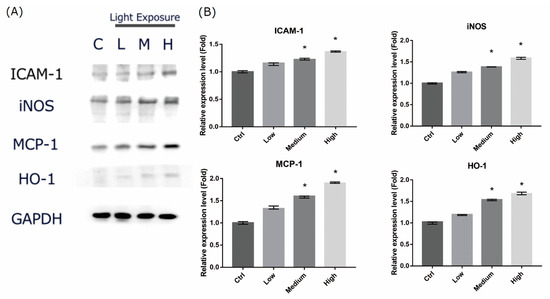 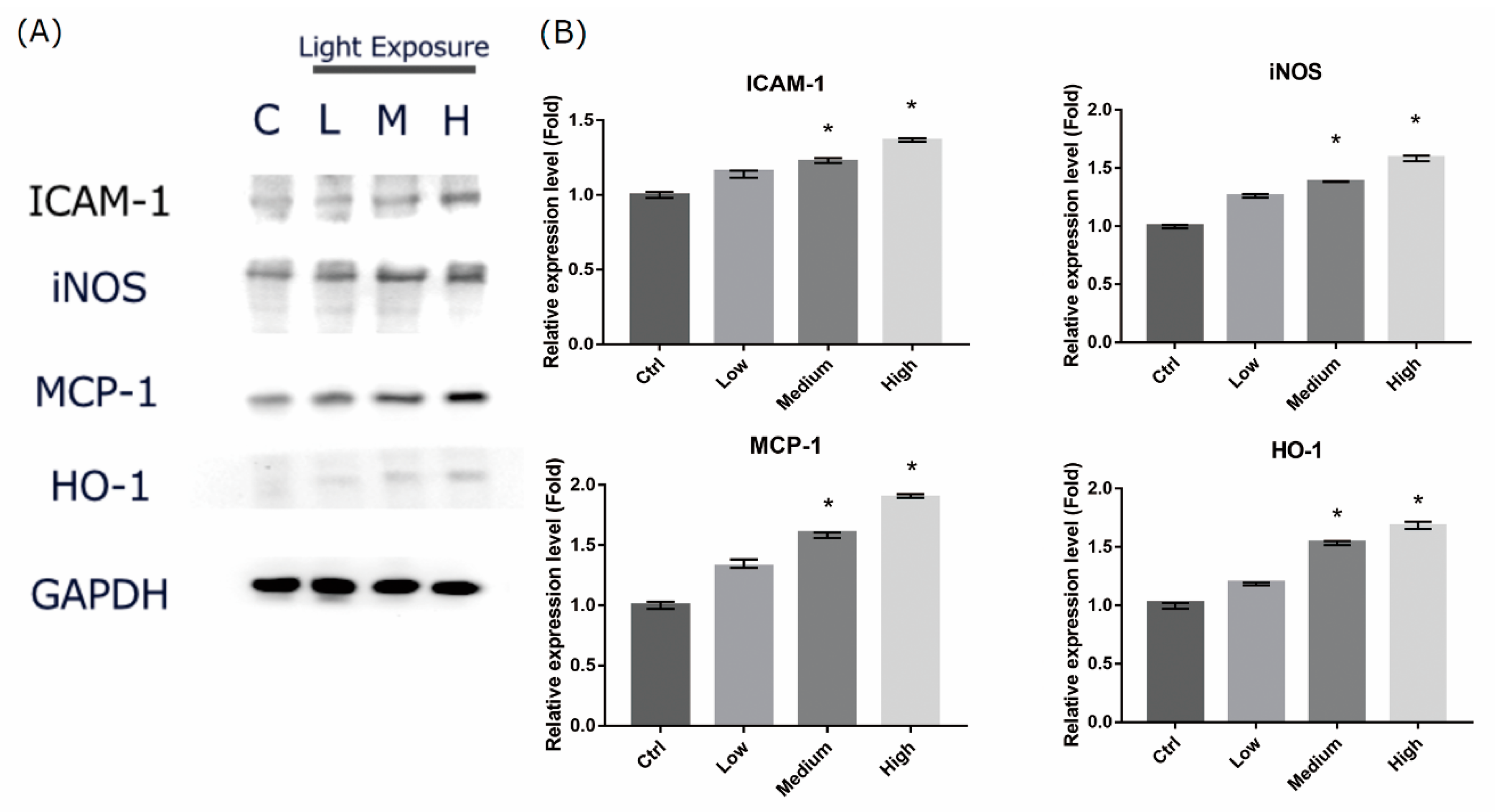 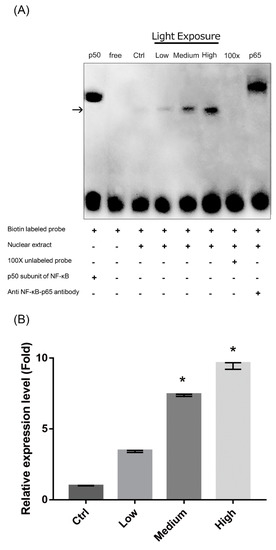 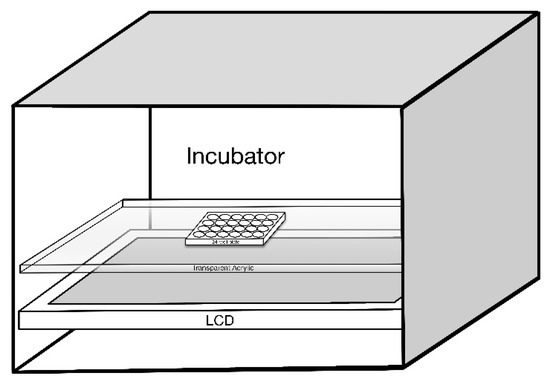