The overactivation of microglia is known to trigger inflammatory reactions in the central nervous system, which ultimately induce neuroinflammatory disorders including Alzheimer’s disease. However, increasing evidence has shown that menaquinone-4 (MK-4), a subtype of vitamin K2, can attenuate inflammation in the peripheral system. Whereas it was also observed at high levels within the brain, its function in this organ has not been well characterized. Therefore, we investigated the effect of MK-4 on microglial activation and clarified the underlying mechanism. Mouse microglia-derived MG6 cells were exposed to lipopolysaccharide (LPS) either with or without MK-4 pretreatment. Cell responses with respect to inflammatory cytokines (Il-1β, Tnf-α, and Il-6) were measured by qRT-PCR. We further analyzed the phosphorylation of TAK1, IKKα/β, and p65 of the NF-κB subunit by Western blotting. We observed that in LPS-induced MG6 cells, MK-4 dose-dependently suppressed the upregulation of inflammatory cytokines at the mRNA level. It also significantly decreased the phosphorylation of p65, but did not affect that TAK1 and IKKα/β. Furthermore, the nuclear translocation of NF-κB in LPS-induced MG6 cells was inhibited by MK-4. These results indicate that MK-4 attenuates microglial inflammation by inhibiting NF-κB signaling. View Full-Text
Keywords: menaquinone-4; microglia; neuroinflammation; NF-κB menaquinone-4; microglia; neuroinflammation; NF-κB
►▼ Show Figures 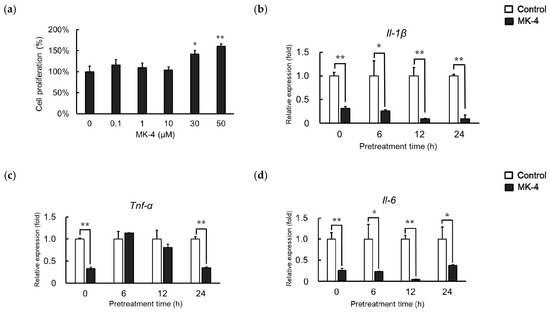