The Ribosome as a Missing Link in Prebiotic Evolution III: Over-Representation of tRNA- and rRNA-Like Sequences and Plieofunctionality of Ribosome-Related Molecules Argues for the Evolution of Primitive Genomes from Ribosomal RNA Modules

The evolution of release factors catalyzing the hydrolysis of the final peptidyl-tRNA bond and the release of the polypeptide from the ribosome has been a longstanding paradox. While the components of the translation apparatus are generally well-conserved across extant life, structurally unrelated release factor peptidyl hydrolases (RF-PHs) emerged in the stems of the bacterial and archaeo-eukaryotic lineages. We analyze the diversification of RF-PH domains within the broader evolutionary framework of the translation apparatus. Thus, we reconstruct the possible state of translation termination in the Last Universal Common Ancestor with possible tRNA-like terminators. Further, evolutionary trajectories of the several auxiliary release factors in ribosome quality control (RQC) and rescue pathways point to multiple independent solutions to this problem and frequent transfers between superkingdoms including the recently characterized ArfT, which is more widely distributed across life than previously appreciated. The eukaryotic RQC system was pieced together from components with disparate provenance, which include the long-sought-after Vms1/ANKZF1 RF-PH of bacterial origin. We also uncover an under-appreciated evolutionary driver of innovation in rescue pathways: effectors deployed in biological conflicts that target the ribosome. At least three rescue pathways (centered on the prfH/RFH, baeRF-1, and C12orf65 RF-PH domains), were likely innovated in response to such conflicts. View Full-Text
Keywords: release factors; translation termination; peptidyl hydrolase release factors; translation termination; peptidyl hydrolase
►▼ Show Figures 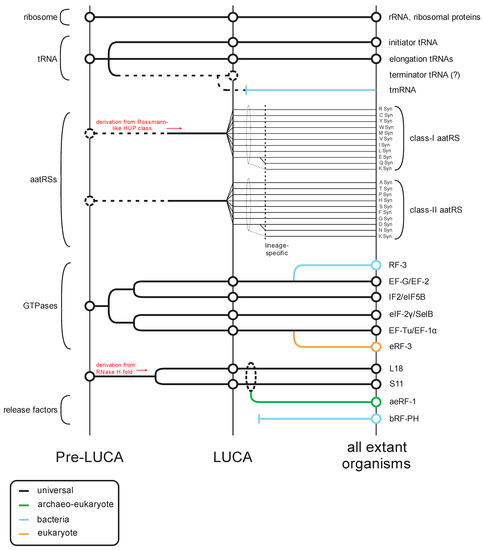