The effect of fungicides on fermentation is of paramount importance to control the quality and safety of wines. In this work, the quality (enological parameters, color, phenolic content, antioxidant activity, and fungicide residues) of wines from Monastrell grapes fortified with iprovalicarb, mepanipyrim, and tetraconazole fungicides was evaluated. Along the winemaking process, initial residues of mepanipyrim and tetraconazole were removed in more than 90% while the dissipation of iprovalicarb was around 73%. Significant statistical differences were found in the presence of iprovalicarb and mepanipyrim residues, especially at the highest concentration assayed. For both fungicides, increases in the volatile acidity (between 4 and 8.6 times), the lactic acid content (between 8.6 and 20.5 times), the percentage of polymeric anthocyanins (between 1.3 and 1.7 times), and also a slight increase of the total phenolic index and the total anthocyanin content determined by spectrophotometry were observed. On the contrary, the total monomeric anthocyanins content decreased about 16.3% and 28.6% in the presence of iprovalicarb and mepanipyrim, respectively. These results could be related to a higher development of acetic acid or lactic bacteria in the presence of these fungicides. The color of the final wines was also different in comparison with the control, with a higher yellow component, color intensity, tonality, and hue angle because of pH changes in the medium. Tetraconazole fermentations had a more similar trend to the control wine, probably due to the lower concentration of this fungicide in the grape must at the initial time. No effects on the antioxidant activity was observed for any of the target fungicides. A multivariate statistical analysis was done to view the interrelationships between different variables (color and anthocyanins profile). The obtained model allowed the wines to be separated according to the fungicide treatment applied. View Full-Text
Keywords: fungicides; wine quality; winemaking process; anthocyanins; antioxidant activity fungicides; wine quality; winemaking process; anthocyanins; antioxidant activity
►▼ Show Figures 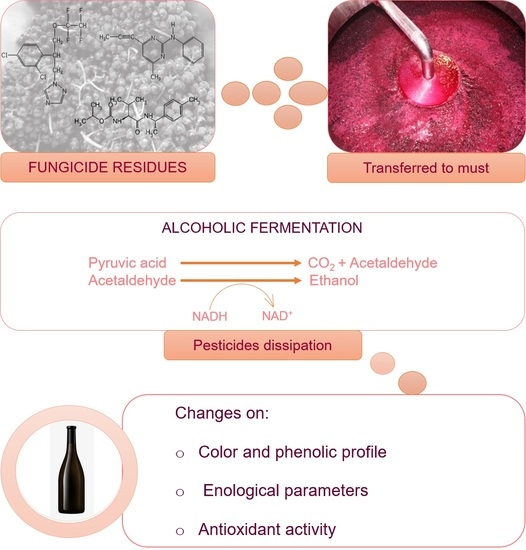