Although reperfusion therapy has improved outcomes, acute myocardial infarction (AMI) is still associated with both significant mortality and morbidity. Once irreversible myocardial cell death due to ischemia and reperfusion sets in, scarring leads to reduction in left ventricular function and subsequent heart failure. Regenerative cardiovascular medicine experienced a boost in the early 2000s when regenerative effects of bone marrow stem cells in a murine model of AMI were described. Translation from an animal model to stem cell application in a clinical setting was rapid and the first large trials in humans suffering from AMI were conducted. However, high initial hopes were early shattered by inconsistent results of randomized clinical trials in patients suffering from AMI treated with stem cells. Hence, we provide an overview of both basic science and clinical trials carried out in regenerative cardiovascular therapies. Possible pitfalls in specific cell processing techniques and trial design are discussed as these factors influence both basic science and clinical outcomes. We address possible solutions. Alternative mechanisms and explanations for effects seen in both basic science and some clinical trials are discussed here, with special emphasis on paracrine mechanisms via growth factors, exosomes, and microRNAs. Based on these findings, we propose an outlook in which stem cell therapy, or therapeutic effects associated with stem cell therapy, such as paracrine mechanisms, might play an important role in the future. Optimizing stem cell processing and a better understanding of paracrine signaling as well as its effect on cardioprotection and remodeling after AMI might improve not only AMI research, but also our patients’ outcomes. View Full-Text
Keywords: regenerative cardiovascular therapy; stem cell; myocardial infarction; miRNA; heart failure; reperfusion injury; conditioning regenerative cardiovascular therapy; stem cell; myocardial infarction; miRNA; heart failure; reperfusion injury; conditioning
►▼ Show Figures 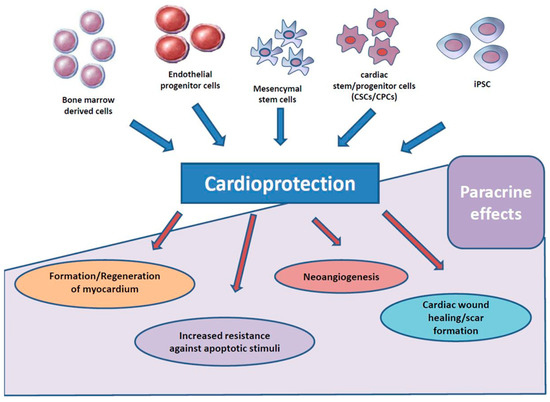