First discovered at the turn of the twentieth century by Power et al., XN is a simple prenylated flavonoid found in the female inflorescences, or hop cones, of the hop plant Humulus lupulus [1]. Hops are used to add flavor, color, and bitterness to beer. Since hops are rarely used in a culinary setting, beer represents the main dietary source of XN. Extensive studies show XN inhibits cancer cell growth in vitro, and reduces weight gain and improves cognitive function in vivo [2,3,4,5,6,7,8,9]. Nevertheless, despite these positive effects, the use of XN raises concerns, as it was shown both in vitro and in vivo that XN is metabolized into 8-prenylnaringenin (8-PN), the most potent phytoestrogen currently known [10].
Synthesis of XN from phloracetophenone is inefficient [11]; therefore, XN is currently isolated from CO2-extracted hops, a byproduct of the hops industry, which provides a less expensive alternative to synthesis [2]. Because of the inexpensive production of XN and its purported health benefits, it is marketed as a dietary supplement. Preclinical animal studies show that XN is safe in high doses. Female BALB/c mice fed XN at 1000 mg/kg body weight for three weeks exhibited no adverse effects on major organ function and homoeostasis [12]. Furthermore, Sprague Dawley rats treated with 1000 mg/kg body weight per day by oral gavage showed only weak hepatotoxicity and poor development of mammary glands, neither of which are fatal [13]. In humans, an escalating dose study was performed in menopausal women using an extract from hops rich in XN. The results showed that the extract does not affect the sex hormones estradiol, follicle stimulating hormone, or luteinizing hormone, does not affect blood clotting, and caused no acute toxicity [14].
Previous studies show that XN readily isomerizes to isoxanthohumol (IX), which is the first step in the metabolism of XN (Figure 1, pathway 1). This isomerization is enhanced by the high temperatures used during wort boiling [15]. It also occurs in the stomach, due to the acidic conditions encountered there [16]. After isomerization, the gut microbiome and the host’s hepatic cytochrome P450 enzymes metabolize IX into 8-PN [10]. A previous study showed Eubacterium limosum metabolizes IX via O-demethylation (Figure 1, pathway 2) [17]. Up to 34% of XN entering the gut can be converted to 8-PN; therefore, the microbiome plays a significant role in the formation of 8-PN from XN and IX. [18]. Our own research group recently discovered that E. ramulus metabolizes XN into DXN, and 8-PN into O-desmethylxanthohumol and O-desmethyl-α,β-dihydroxanthohumol [19]. On the other hand, both DXN and TXN differ from XN in that they lack the α,β-unsaturated ketone found in XN; therefore, interconversion to XN or IX is not metabolically possible [3]. This property prevents the formation of 8-PN, one of the most potent phytoestrogens known (Figure 1) [3,20,21]. Interestingly, 8-PN possesses anti-proliferative effects in vitro against the colon carcinoma cell line Caco-2, breast carcinoma line MCF-7, the melanoma line SK-MEL-28, and a Burkitt lymphoma cell line [21,22,23,24,25]. The estrogenic effects of 8-PN also show promising clinical results in treating postmenopausal symptoms, but these studies are usually short term and were not designed to assess the effect of potential cancer promoting properties [26]. In the host, 8-PN acts as a strong agonist for estrogen receptors located in cells throughout the body, which could increase one’s risk of developing hormone-dependent cancers [27,28]. Thus, its estrogenic activity is of concern and additional studies to assess the safety of 8-PN in long-term supplementation are needed [26].
In vitro, XN inhibits proliferation of breast, colon, hepatocellular, ovarian, pancreatic, prostate, and medullary thyroid cancer cell lines [5,9,29,30,31,32,33,34,35,36,37,38]. Treatment of four hepatocellular carcinoma cell lines—Huh-7, HepG2, Hep3B, and SK-Hep-1—with XN decreased both viability and colony forming ability [39]. XN also caused dose-dependent cytotoxic effects in colon carcinoma cell lines HT29, HCT15, and 40-16 [5,36,40]. Several apoptotic mechanisms were identified in the various cell types. In 40-16 cells, XN activates the death receptor and mitochondrial apoptosis pathway [36]; however, in HCT116 cells, XN induces apoptosis through PKA inhibition via upregulation of adenylate cyclase, while HT29 cells appeared insensitive to XN toxicity [41]. In the metastatic colon carcinoma line SW620, XN was proposed to act as a mitocan, because it induces apoptosis by impairing mitochondrial function [42]. On the other hand, in the hepatocellular carcinoma line HepG2, XN induces apoptosis through the NF-κB/p53-apoptosis signaling pathway [43].
Here we demonstrate the anti-proliferative and cytotoxic effects of XN in two human colon adenocarcinoma cell lines (HT29 and HCT116) and two human hepatocellular carcinoma cell lines (HepG2 and Huh7). Furthermore, we show for the first time that DXN and TXN possess similar effects, and in most cases, a lower half-maximal growth inhibitory concentration (IC50) than XN in these cell types. While XN and DXN do not appear to induce cell cycle arrest, HT29 cells treated with TXN arrest in the G0/G1 phase of the cell cycle. These findings demonstrate that the two non-estrogenic XN derivatives are attractive alternatives to test along with XN in future preclinical studies using mouse models of colorectal and hepatocellular carcinoma.

The half maximal inhibitory concentration (IC50) of DXN and TXN for two colon carcinoma and two hepatocellular carcinoma cell lines was determined using the SRB colorimetric assay for cytotoxicity screening, as previously described [44]. Table 1 lists the IC50 values experimentally determined for XN, DXN, and TXN in the colon carcinoma cell lines HCT116 and HT29, and the hepatocellular carcinoma cell lines HepG2 and Huh7. DXN and TXN (except HepG2) exhibited lower IC50 values than XN. For the cells most sensitive to DXN and TXN, the decrease in IC50 values was approximately 30% compared to XN (Table 1). In HepG2 cells, TXN was slightly less potent at inhibiting cell proliferation compared to XN, as indicated by a higher IC50 value (Table 1). Compared to DXN, TXN was more potent at inhibiting proliferation in Huh7 cells, as indicated by a lower IC50 value, whereas DXN was more potent in the other three cell lines (Table 1). HT29 was less sensitive (highest IC50 value) to XN treatment than HCT116, but showed a similar sensitivity to the derivatives DXN and TXN as HCT116 (Table 1).

We treated HT29 cells for 24 h following cell cycle synchronization by serum starvation, and performed cycle analysis with propidium iodide staining. Results showed that only TXN induced a statistically significant cell cycle arrest in these cells, as indicated by an increased accumulation of cells in the G1 phase (Figure 5). All prenylated flavonoids induced cell apoptosis, as indicated by a sub G0/G1 population of 82%, 60%, and 45% in the cells treated with XN, DXN, and TXN, respectively.

Cells were seeded into 96-well plates (15,000 cells per well). After 24 h, cells were treated with either XN, DXN, or TXN, as described above. Cell viability was evaluated using a sulforhodamine B (SRB) assay (Sigma-Aldrich, St. Louis, MO, USA), as described previously [44]. Absorbance of dye was measured at a wavelength of 565 nm, using a Molecular Devices SpectraMax (Molecular Devices, Sunnyvale, CA, USA) plate reader.

At various time points after treatment with XN, DXN, or TXN, adherent and floating cells were collected and fixed in 70% ethanol at one million cells per aliquot. Samples were centrifuged at 500× g, washed with PBS, and re-suspended in cellular DNA staining solution containing 40 mg/mL propidium iodide (Sigma-Aldrich, St. Louis, MO, USA) and 100 mg/mL RNase A (Sigma-Aldrich) in PBS. After a 15-min incubation at room temperature, cell populations were quantified using a Guava personal cytometer (Guava Technologies).

Statistical analyses were performed with the GraphPad Prism 7 software (GraphPad Software, Sand Diego, CA, USA). Group differences were assessed with a one-way ANOVA, followed by a Sidak’s post hoc test. The Sidak’s post hoc test was used to compare every mean with either the control mean, or XN mean. Statistical significance was set at p ≤ 0.05.

This research was funded by the National Institutes of Health, grant NIH/NCCIH 5R01AT009168 to A.F.G., J.F.S., and C.S.M., Hopsteiner, Inc., New York, and the Oregon State University Foundation Buhler-Wang Research Fund. I.E.L. was supported by the 2017-18 Christopher and Catherine Mathews Graduate Fellowship in the Department of Biochemistry and Biophysics, the Franz Stenzel M.D. and Kathryn Stenzel II Scholarship by the Oregon Office of Student Access and Completion, and the 2019 Audrey and George Varsevelt Linus Pauling Institute Graduate Fellowship.

We thank Hopsteiner Inc. for providing XN and TXN. We thank the Department of Biochemistry and Biophysics, and the Linus Pauling Institute at Oregon State University for their support. We thank John Molitor in the College of Public Health and Human Sciences at Oregon State University for valuable advice regarding statistical analysis, and Kelly C. Schoun. 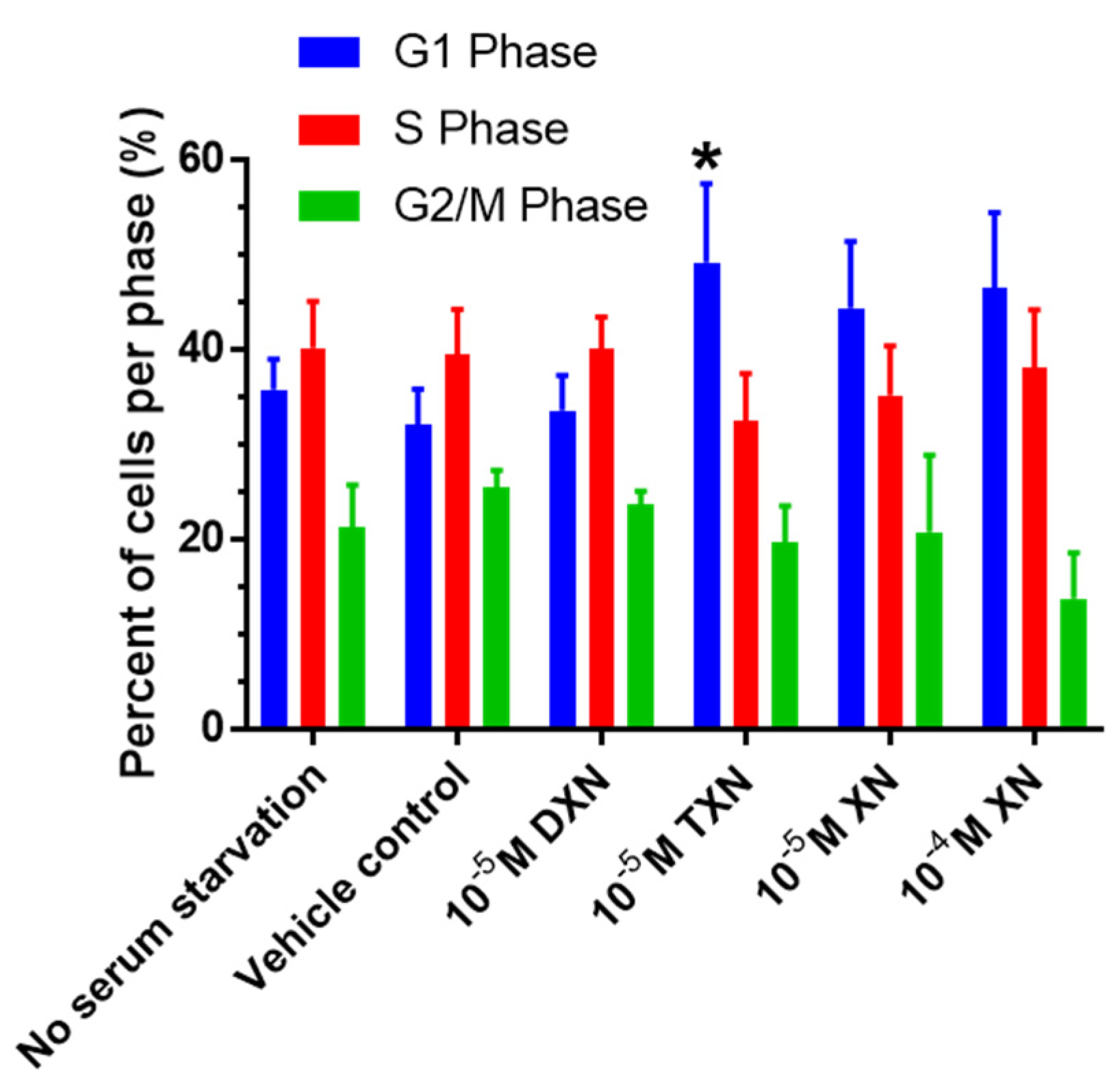