The Impact of Autoantibodies on IVF Treatment and Outcome: A Systematic Review

Tumors often show intra-tumor heterogeneity because of genotypic differences between all the cells that compose it and that derive from it. Recent studies have shown significant aspects of neuroblastoma heterogeneity that may affect the diagnostic-therapeutic strategy. Therefore, we developed a laboratory protocol, based on the combination of the advanced dielectrophoresis-based array technology and next-generation sequencing to identify and sort single cells individually and carry out their copy number variants analysis. The aim was to evaluate the cellular heterogeneity, avoiding overestimation or underestimation errors, due to a bulk analysis of the sample. We tested the above-mentioned protocol on two neuroblastoma cell lines, SK-N-BE(2)-C and IMR-32. The presence of several gain or loss chromosomal regions, in both cell lines, shows a high heterogeneity of the copy number variants status of the single tumor cells, even if they belong to an immortalized cell line. This finding confirms that each cell can potentially accumulate different alterations that can modulate its behavior. The laboratory protocol proposed herein provides a tool able to identify prevalent behaviors, and at the same time highlights the presence of particular clusters that deviate from them. Finally, it could be applicable to many other types of cancer.
Keywords: intra-tumor heterogeneity; single cell isolation; whole genome amplification; next-generation sequencing; copy number variations; chromosomal pattern intra-tumor heterogeneity; single cell isolation; whole genome amplification; next-generation sequencing; copy number variations; chromosomal pattern

It is widely accepted that cancer is a highly heterogeneous disease and that subpopulations of cells, within a single tumor, can exhibit distinct genomic profiles. Indeed, the ensemble behaviors of a cellular population may not represent the behavior of any individual cell [1]. Recent technological advances made it possible to analyze nucleic acids and proteins from different areas of a single tumor, as well as within a heterogeneous tumor sample, reaching single-cell resolution. In this way, it is possible to avoid the averaging of bulk analysis and to capture the heterogeneity of cells [2].
In the case of Neuroblastoma (NB), where high cellular heterogeneity is a hallmark, the wide range of clinical presentations and the uneven response to treatment seem to be due to cellular heterogeneity [3]. NB heterogeneity is related to tumor differentiation and histology: it derives from multipotent Neural Crest Cells (NCCs), forms during embryonic development, and mainly involves the sympathetic nervous system (abdomen, especially the adrenal gland) [4,5].
The occurrence of NB is at early infancy and childhood, almost all NB cases being diagnosed at the age of 10 (98%). NB survival rate depends on the success of the treatment and the rate of diagnosis [6]. Nearly 50% of patients have a localized tumor (primary site) with an average survival rate of about five years, while in the other 50% of patients, it occurs in an advanced, final stage [7]. Generally, patients aged more than 1.5 years at diagnosis have much worse outcomes than infants, and the presence of the metastatic stage denotes a poor prognosis [8]. Genetics plays a crucial role in the NB tumorigenesis; in fact, two key factors to identify the progression and prognosis of the tumor are the detection of structural Copy Number Variations (CNVs) and the amplification of the MYCN gene, able to identify those tumors with poor prognosis and rapid progression, independently of age and clinical stage [7,8,9]. However, MYCN amplification can only be seen in about 25% of NB patients; thus, other contributing factors that are still unknown or not tested have to be implicated in the other cases [10].
Sometimes, genetic variations, which affect only a small number of cells, can be undetectable, especially if the molecular analysis is performed on a larger mixed pool of normal and variant tumor cells [11]. As a consequence, the signal of the tumor cells that are driving the progression of the tumor could be hidden. The characterization of single cells would allow highlighting the presence of possible subpopulations or providing further information on the genetic identity of the cells.
Therefore, the purpose of this study was to develop a laboratory protocol that allows the evaluation of the cellular heterogeneity, avoiding incurring over- or under-estimation errors. We used a combination between the advanced DEPArray™ technology and Next-Generation Sequencing (NGS) to identify, manipulate, and sort single cells individually and then to carry out their CNV analysis. The presence of chromosomal alterations, some common to all cells and others specific to a few cells, first allowed identifying the cellular subpopulations and, subsequently, checking for genes that were located in those regions.

The protocol, developed on 2 NB cell lines, SK-N-BE (2)-C and IMR-32, includes: (a) the identification and separation of each single cell in a single tube; (b) the preliminary Whole Genome Amplification (WGA) step; (c) the NGS for the detection of the CNVs; and (d) the software for the analysis of the chromosomal patterns.

The DEPArray™ System is an automated instrument able to identify, sort, and recover individual rare cells, after a preliminary cell immunofluorescence staining. Once collected from the cell culture plate, 500,000 cells for each cell line were suspended in the Running Buffer (RB: PBS with BSA 0.5% and EDTA 2 mM), fixed in 2% PFA at Room Temperature (RT) for 20′, suspended in blocking solution with 3% BSA at RT for 10′, and processed for the immunofluorescence staining. The cells were firstly filtered (by a 30-micrometer filter) in the RB and then incubated with 100 μL of primary antibody (mouse anti-human GD2; BD Biosciences, San Jose, CA, USA) at 4 °C for 60′. GD2 has been used extensively as a target in mAb therapy and has been the primary target of antibody recognition in NB [50]. The cells were then incubated at 4 °C for 60′ with secondary antibody (goat anti-mouse APC; Abcam, Cambridge, UK), suspended in a permeabilizing solution with 100 μL of triton 0.2% for 5′, and stained with 100 μL of Hoechst solution for 5′ at RT. After incubation, cells were washed twice by adding 1 ml of RB and centrifuged at 2000 rpm for 5′. An aliquot of each sample (~1 mL) was transferred into a clean 1.5-mL tube, filled, washed twice with 1 mL of SB115 buffer (Silicon Biosystems, Bologna, Italy) at RT, and centrifuged at 1000× g for 5′. Between different steps, when not detailed above, cells were washed thrice with 1 mL of PBS and centrifuged at 2000 rpm for 5′.
For the sorting process, 5000 cells in 13 mL were loaded with 380 mL of the manipulation buffer (SB115, Silicon Biosystem, Bologna, Italy) into an A300K cartridge (Silicon Biosystem, Bologna, Italy). This single-use, microfluidic cartridge contains an array of individually-controllable electrodes, each with embedded sensors. This circuitry enables the creation of Dielectrophoretic (DEP) cages around the cells. Individual cells of interest are gently moved to specific locations on the cartridge or into the holding chamber for their isolation and recovery. The cartridge was then scanned by an automated fluorescence microscope; this optic system provides a 10× magnification (0.64 micron/pixel) and a 20× magnification (0.32 micron/pixel) resolution. The CellBrowser software (Silicon Biosystem, Bologna, Italy) allows cell selection based on multiple parameters from fluorescence and bright field images. The protocol chosen was fixed low-density cells, and the chip-scan setting included DAPI, Brithfield, and APC. Firstly, cells able to move were grouped, and then, based on APC, fluorescent cells were isolated as GD2 positive. High-quality, image-based selection allows the identification and isolation of the cells of interest. Taking into account the SB115 starting volume, the DEPArray allows isolating a maximum of 35 single cells. Each cell was individually collected, washed twice in PBS, and stored at −20 °C until the WGA.

WGA samples were analyzed by NGS using the VeriSeq PGS Kit (Illumina, San Diego, CA, USA), a system specifically designed for single-cell analysis and able to provide a comprehensive and accurate screening of all 24 human chromosomes in approximately 12 h. Tagmentation, sample barcoding, and libraries’ preparation were all performed using the manufacturer’s protocol. Then, the products were purified by using a size selection and normalized to equalize the quantity of each sample. The final products were pooled, denatured, and sequenced using the MiSeq Reagent Kit v3, PGS (Illumina, San Diego, CA, USA) on a MiSeq System.

NGS results were analyzed using the BlueFuse Multi Software V4.4 (Illumina, San Diego, CA, USA), a complete solution for analyzing and reporting the VeriSeq results by enabling a full understanding of the status of each chromosome and the results’ confirmation. Sophisticated algorithms calculate and call the status for each chromosome, as either normal or abnormal, and include an estimate of the confidence in the call based on the assay noise or on any underlying ambiguity. In particular, for sequencing data, the number of sequences is proportional to the copy number, so a greater or lower number of reads will correspond to the gain or loss of chromosomal regions.
Once CNVs were detected in each analyzed single cell, we verified for each altered chromosomal region which genes were comprised in them. The genes were referenced from the Atlas Genetics Oncology.org (http://atlasgeneticsoncology.org, accessed on September 2018), an open access website that contains all the information about the genes that have been related to cancer. Genes were selected based on their position in chromosomes that correlated with our NGS findings, as well as on their direct correlation with tumor progression and tumor development in various cancers, apart from NB.

Our data show that the combined use of DEPArrayTM technology with high-coverage NGS provides a good method to identify and explore CNVs, from which it is possible to screen the chromosomal patterns in cancer cells, and it is a well-established approach to examine tumor genetic heterogeneity. Furthermore, the chromosomal pattern evaluation of the collected single cells may be useful to highlight the driving mutations responsible for disease progression and therapy response.
These preliminary data encourage the application of this protocol also in other types of cancers and support the idea that the identification of chromosomal patterns, rather than individual biomarkers, could demonstrate the value of liquid biopsy as a diagnostic and prognostic tool.

This work was supported by the grant “Finanziamento della Ricerca in Ateneo”, D:R: n° 409/2017, funded from the University of Naples Federico II.

The authors thank Flora Cimmino and Luigi Del Vecchio from University of Naples Federico II, who have made valuable contributions thanks to their experience, respectively, in the field of neuroblastoma and of cytofluorimetry. 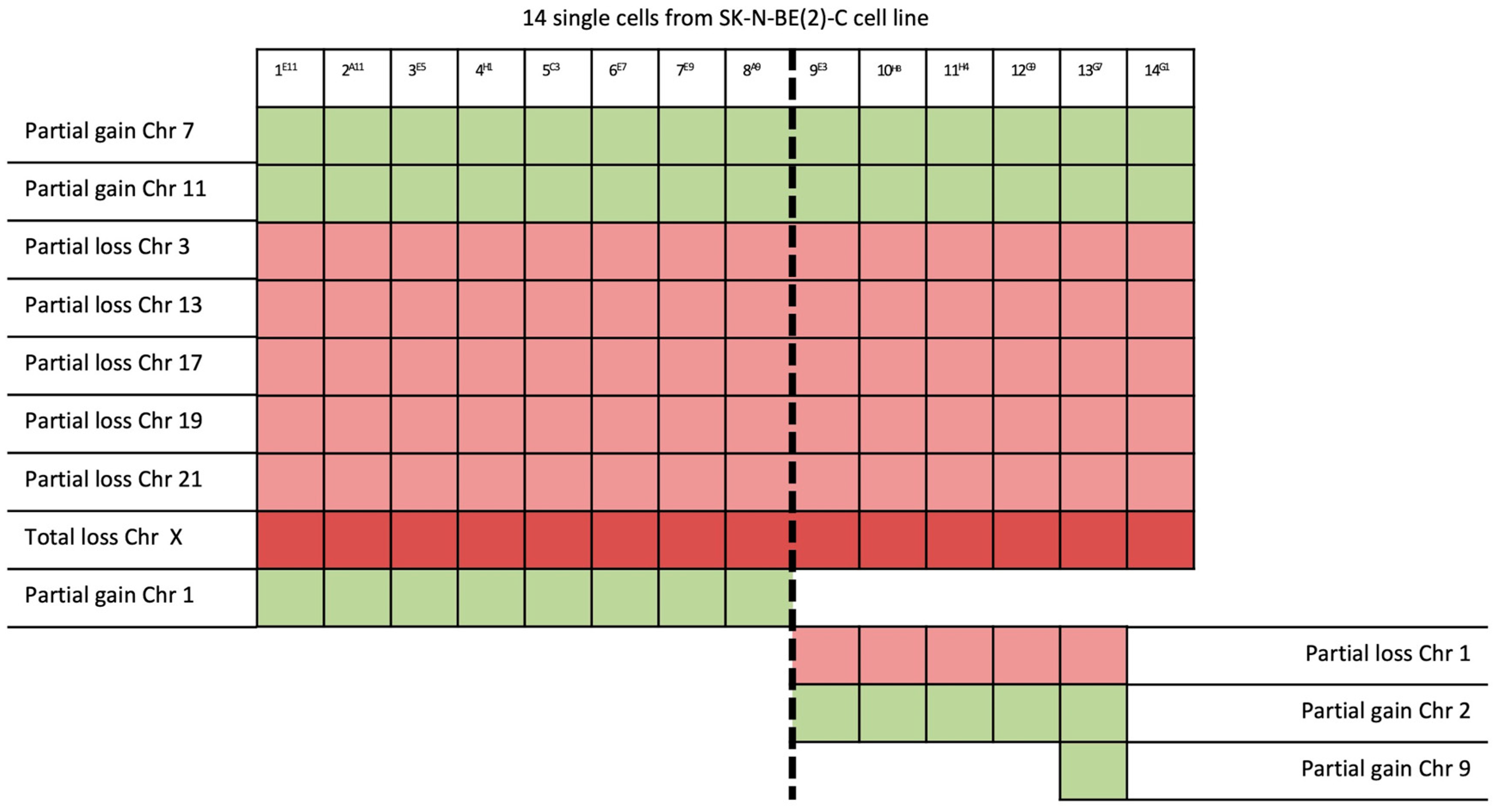