Mechanisms of Communication in the Mammalian Circadian Timing System

The human skin is the outermost physical barrier and has its own circadian machinery that works either cooperatively with the central clock, or autonomously. Circadian rhythms have been observed in many functions related to epidermal homeostasis including hydration and inflammation, and this functional oscillation is disturbed by ultraviolet radiation (UVR), which is a strong environmental cue. Among the genes estimated to show circadian expression in the skin, metalloproteinase inhibitor 3 (TIMP3), has a rhythmic expression in synchronized human keratinocytes similar to that of the core clock gene PER1 and an epidermal circadian regulatory gene, aquaporin 3 (AQP3) but was antiphase to the core clock gene BMAL1. Tumor necrosis factor-α (TNF-α), the regulatory target of TIMP3 via a disintegrin and metalloproteinase domain 17 (ADAM17), was inversely regulated when TIMP3 expression was downregulated by ultraviolet B (UVB) treatment. When synthetic TIMP3 peptides were applied to the cells, the secretion of TNF-α did not increase following the UVB treatment. Similar to TIMP3 peptides, Camellia sinensis leaf-derived extracts showed a distinguishing efficacy in recovering TIMP3 expression, downregulated by UVB treatment. Together, our results suggest that TIMP3 reversely mediates UVR-induced inflammation by being highly expressed during the daytime; therefore, recovering the circadian expression of TIMP3 using synthetic TIMP3 peptides or bioactive natural ingredients could at least in part inhibit the UVR-induced cellular phenomena. View Full-Text
Keywords: circadian rhythm; TIMP3; AQP3; UVB; anti-inflammation; Camellia sinensis leaves circadian rhythm; TIMP3; AQP3; UVB; anti-inflammation; Camellia sinensis leaves
►▼ Show Figures 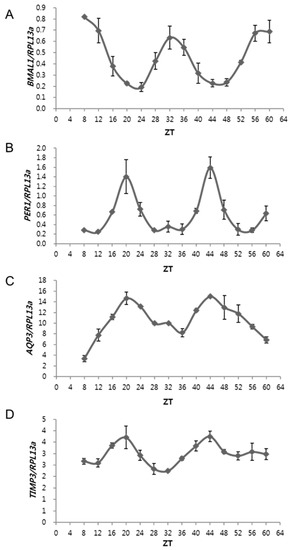