Knowledge of the fascinating world of DNA repeats is continuously being enriched by newly identified elements and their hypothetical or well-established biological relevance. Genomic approaches can be used for comparative studies of major repeats in any group of genomes, regardless of their size and complexity. Such studies are particularly fruitful in large genomes, and useful mainly in crop plants where they provide a rich source of molecular markers or information on indispensable genomic components (e.g., telomeres, centromeres, or ribosomal RNA genes). Surprisingly, in Allium species, a comprehensive comparative study of repeats is lacking. Here we provide such a study of two economically important species, Allium cepa (onion), and A. sativum (garlic), and their distantly related A. ursinum (wild garlic). We present an overview and classification of major repeats in these species and have paid specific attention to sequence conservation and copy numbers of major representatives in each type of repeat, including retrotransposons, rDNA, or newly identified satellite sequences. Prevailing repeats in all three studied species belonged to Ty3/gypsy elements, however they significantly diverged and we did not detect them in common clusters in comparative analysis. Actually, only a low number of clusters was shared by all three species. Such conserved repeats were for example 5S and 45S rDNA genes and surprisingly a specific and quite rare Ty1/copia lineage. Species-specific long satellites were found mainly in A. cepa and A. sativum. We also show in situ localization of selected repeats that could potentially be applicable as chromosomal markers, e.g., in interspecific breeding. View Full-Text
Keywords: Allium; plant genome; repeats; retrotransposon; satellite; telomere; rDNA; RepeatExplorer; TAREAN Allium; plant genome; repeats; retrotransposon; satellite; telomere; rDNA; RepeatExplorer; TAREAN
►▼ Show Figures 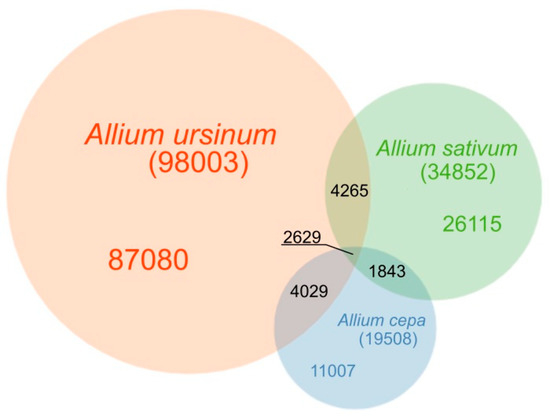