Biomaterials: Foreign Bodies or Tuners for the Immune Response?
Next Article in Special Issue

The Biochemical and Pharmacological Properties of Ozone: The Smell of Protection in Acute and Chronic Diseases

Zearalenone (ZEN) is a mycotoxin produced by Fusarium fungi [1,2]. The structure of ZEN is similar to that of 17β-oestradiol: ZEN competitively binds to estrogen receptors and activates the transcription of estrogen-responsive genes [3,4]. Therefore, ZEN plays a role by interfering with the physiological estrogen signalling pathway. ZEN may cause reproductive problems, such as ovarian dysfunction, decreased fertility, early abortion, reduced litter size, lower testicular weight, decreased motility of spermatozoa, and a lower total motile sperm count [5,6,7]. These reproductive toxicities are all related to the ZEN interference with the binding site of estrogen. However, some of the toxic effects of ZEN in an animal’s body cannot be explained simply by affecting the estrogen binding site. Some reports indicate that ZEN can cause oxidative stress and inflammation in animals. For example, studies showed that vitamin C could protect the liver of piglets by regulating the expression of nuclear receptors PXR and CAR and their target genes to prevent ZEN-induced oxidative stress [8]. Fan et al. demonstrated that ZEN-induced intestinal inflammation was mediated by NLRP3 and that ZEN could also affect cell apoptosis and autophagy by regulating target genes and signalling pathways [9]. These studies revealed that SIRT1 protects cardiac cells against apoptosis induced by ZEN or its metabolites α- and β-zearalenol through an autophagy-dependent pathway [10]. Long Miao found that procyanidins protect ZEN-induced apoptosis in mice through the Nrf2/ARE signalling pathway [11]. Therefore, the toxic effects of ZEN on animal organisms, such as oxidative stress, inflammatory response, apoptosis, and autophagy, need to be explained further by toxicological mechanisms.
MicroRNA (miRNA) is an 18–26 bp non-coding nucleotide sequence that affects the post-transcriptional gene expression by the specific base pairing of the 5’ (the seed) with the 3’ untranslated region of the target mRNA [12,13]; miRNAs are considered to act primarily by disrupting the cytoplasmic mRNA and regulating the mRNA translation (about 80%). A previous study reported that miRNAs could up-regulate the target mRNA during cell cycle arrest and inhibit translation in proliferating cells [14]. The miRNA maturation process involved in the nuclear processing of primary miRNA by DROSHA, nuclear export of precursor miRNA (pre- miRNA) by exportin 5, and cytoplasmic processing of pre- miRNA by DICER [15]. Recent studies showed that the differential expression of miRNAs in mouse Leydig cells was discovered by the addition of the brain-derived neurotrophic factor and luteinizing hormone during the cultivation of TM3 cells [16,17]. These studies show that miRNAs may be involved in the regulation of hormones in certain physiological functions of mouse Leydig cells. As a special type of estrogen, ZEN can compete with estrogen in vivo and cause reproductive damage to the body [3,4]. Whether the miRNAs after ZEN exposure to TM3 cells are involved in the regulation of germ cell toxicology is unclear.
Clinical studies should determine whether and how miRNAs participate in the toxicological processes of germ cells by miRNA sequencing. Therefore, this study provides a theoretical basis for the molecular toxicological studies of ZEN. At present, ZEA has been thoroughly explained to have many toxic effects at the mRNA level, but whether miRNA is involved in the toxicological effects of ZEA and the mechanism of the toxicological action of miRNA in ZEA have not been elucidated. Only a relatively few studies have been conducted on these issues, and further research is needed. Thus, on the basis of the ZEA-infected cell model, we searched for differentially expressed miRNAs and combined them with biological information technology to analyze the relationship between differentially expressed miRNAs and ZEA-induced cytotoxicity. We aimed to provide a theoretical basis for future molecular studies on the toxicology of ZEN.

2.1. Effect of ZEN on the Proliferation of TM3 Leydig Cells

After 24 h of incubation, ZEN treatment markedly inhibited the cell viability in a dose-dependent manner (Figure 1A).

2.2. Differential Expression of miRNAs in the ZEN Exposure Groups

The miRNA deep sequencing analysis was used to identify the differential expression of miRNAs in the TM3 Leydig cells between the ZEN-treated and control groups. In the miRNA sequencing results, 197 miRNAs changed significantly (fold change > 1.5, p < 0.05), with 86 miRNAs up-regulated and 111 miRNAs down-regulated (Figure 1B).

For the target animal species, Target Gene and MiRanda software were used to perform target gene predictions for miRNAs with significant differences. The predicted genes were classified into 3 Gene ontology (GO) categories and 50 terms were enriched from gene ontology analysis (Figure 2). Twenty-five terms were enriched to the biological process category, including “biological process” and “regulation of transcription”. Fifteen terms were enriched to the cellular component category, including “cytoplasm”, “nucleus”, and “integral components of membrane”. Ten terms were enriched to the molecular function category, including “protein binding”, “molecular function”, and “metal ion binding”.
Pathway significance enrichment analysis revealed that the ZEN-affected miRNA target genes have a close relationship with signal pathways, such as the Ras signalling pathway, the pathway in cancer, Foxo signalling pathway, and endocytosis. The number of miRNA target genes in these pathways is significant. These pathways have a regulatory effect on germ cell apoptosis, autophagy, oxidative stress, cancer development, invasion, and differentiation. The above signal pathways were the focus of the research on the effects of ZEN on germ cells (Figure 3). Some miRNAs likely to be associated with ZEN toxicology were screened by GO and Kyoto Encyclopedia of Genes and Genomes (KEGG) enrichment analysis. The results are shown in Table 1.
We mapped the miRNA-gene-pathway interaction map based on the GO and KEGG analyses (Figure 4). One miRNA can regulate multiple target genes, and one target gene is regulated by multiple miRNAs. The target genes regulated by miRNAs regulate the corresponding pathways. Through the miRNA-gene-pathway interaction map, the relationship between the miRNA, target genes, and signalling pathways can be clearly seen. However, these signalling pathways are closely related to the toxicological mechanisms of ZEN.

2.4. Validation of the Differentially Expressed miRNAs

2.5. Verification of the miRNA Target Genes

Mouse TM3 Leydig cells were obtained from the American Type Culture Collection (Beijing, China). The cells were seeded as monolayer cultures in Dulbecco’s modified Eagle ‘s medium/F-12 (HyClone, Logan, UT, USA) with 10% (v/v) inactivated fetal bovine serum and 1% (v/v) penicillin/streptomycin incubated at 37 °C with 5% CO2. When the volume of adherent cells occupied 80% of the dish, the cells were treated with 50 μmol/L of ZEN for 24 h. Each treatment was replicated thrice.

The cytotoxic effects of ZEN on TM3 cells were determined using a Cell Counting Kit-8 (CCK-8) (Solarbio, Beijing, China) assay. Cells were plated at a density of 2 × 105 per well in 96-well plates. After treatment with 0–90 μmol/L ZEN for 24 h, 10 μL of CCK-8 was added to each well, and the cells were incubated for 2 h at 37 °C. Non-treated cells served as a negative control. The absorbance was determined at a wavelength of 450 nm using a microplate reader (Infinite 200 PRO, ABI, New York, NY, USA). The results are presented as percentage of the values measured for untreated control cells. It has been reported that the IC50 of ZEN-treated TM3 cells is 50 μmol/L [33].

Total RNA was extracted using Trizol reagent (Invitrogen, Carlsbad, CA, USA) following the manufacturer’s procedure. The total RNA quantity and purity were analyzed by Bioanalyzer 2100 and RNA 6000 Nano LabChip Kit (Agilent, Palo Alto, CA, USA) with RIN number greater than 7.0. Approximately 1 µg of the total RNA was used to prepare a small RNA library according to the protocol of TruSeq Small RNA Sample Prep Kits (Illumina, San Diego, CA, USA). We performed single-end sequencing (36 bp) on an Illumina Hiseq2500 in the Lianchuan Biotechnology (Hangzhou, China) following the vendor’s recommended protocol.
Raw reads were subjected to an in-house program, ACGT101-miR (LC Sciences, Houston, TX, USA) to remove adapter dimers, junk, low complexity, common RNA families (rRNA, tRNA, snRNA, snoRNA), and repeats. Subsequently, unique sequences with length in 18~26 nucleotide were mapped to specific species precursors in miRBase 21.0 (http://www.mirbase.org/) by BLAST search to identify known miRNAs and novel 3p- and 5p- derived miRNAs. Length variation at both 3′ and 5′ ends and one mismatch inside of the sequence were allowed in the alignment. The unique sequences mapping to specific species mature miRNAs in hairpin arms were identified as known miRNAs. The unique sequences mapping to the other arm of the known specific species precursor hairpin opposite to the annotated mature miRNA-containing arm were considered to be novel 5p- or 3p- derived miRNA candidates. The remaining sequences were mapped to other selected species precursors (with the exclusion of specific species) in miRBase 21.0 by BLAST search, and the mapped pre-miRNAs were further BLASTed against the specific species genomes to determine their genomic locations. The above two were defined as known miRNAs. The unmapped sequences were BLASTed against the specific genomes, and the hairpin RNA structures containing sequences were predicated from the flank 80 nt sequences using RNAfold software (http://rna.tbi.univie.ac. at/cgi-bin/RNAfold.cgi).
To predict the genes targeted by the differentially expressed miRNAs, two computational target prediction algorithms (TargetScan 50 and miRanda 3.3a) were used to identify the miRNA binding sites. The data predicted by both algorithms were then combined, and the overlaps were calculated. The GO terms and KEGG pathway of these differentially expressed miRNA targets were also annotated. Then, we mapped the predicted target genes to map the miRNA-gene-pathway interactions.

Total RNA was extracted using Trizol reagent (Invitrogen, Carlsbad, CA, USA) following the manufacturer’s procedure. The total RNAs from each sample were reverse-transcribed to cDNA using the miRNA first-strand cDNA synthesis kit (by stem-loop) (Vazyme, Nanjing, China). The qRT- PCR was performed using the miRNA Universal SYBR qPCR Master Mix (Vazyme, Nanjing, China). Reverse transcription reactions were performed at the following parameters: 25 °C (mRNA) for 5 min, 50 °C for 15 min, and 85 °C for 5 min. PCR reactions were performed at the following parameters: 95 °C for 5 min followed by 40 cycles of 95 °C for 10 s and 60 °C for 30 s. A U6 small nuclear RNA was used as the endogenous control for the data normalization of miRNAs, and β-actin was then adopted as the internal control of mRNA expression. The relative expression was calculated by the comparative threshold cycle method. The sequences of the primers used for reverse transcription and qRT-PCR were purchased from Sangon Biotech Company, Shanghai, China (Table 2 and Table 3).

The experiments of cell growth analysis and qRT-PCR were performed with three technical replicates. All values are presented as mean ± SEM. For the small RNA sequencing data, the threshold values we used in choosing the differentially expressed miRNAs were a fold change greater than 1.5 and a p value less than 0.05. For the qRT-PCR data, statistical analysis was performed using the Statistical Package for Social Sciences version 22.0 (IBM, Armonk, NY, USA). The fold changes were calculated through the relative quantification with 2−ΔΔCT. A p value less than 0.05 was considered significant.

This work was financially supported by the National Natural Science Foundation of China (grants No. 31772809; grants No. 31872538;); by National Modern Agriculture Industrial System Project (CARS-39); by the National Science Foundation of Xinjiang Uygur Autonomous Region (2016D01A005) and by National demonstration project on quality and safety of livestock and poultry products (grant No. 40010229).

Thanks to the sequencing service provided by LC-BIO TECHNOLOGIES (HANGZHOU) CO., LTD. 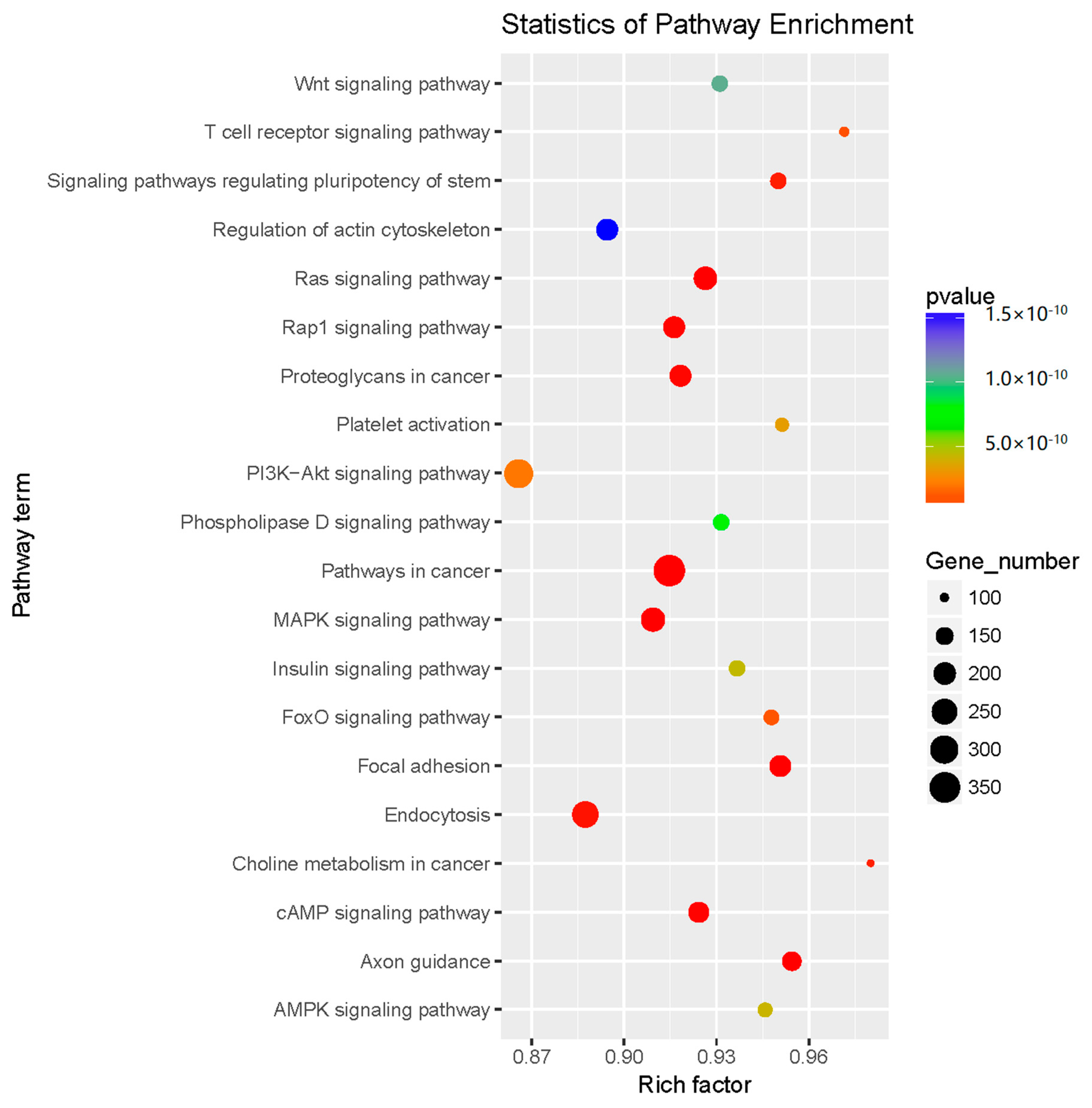 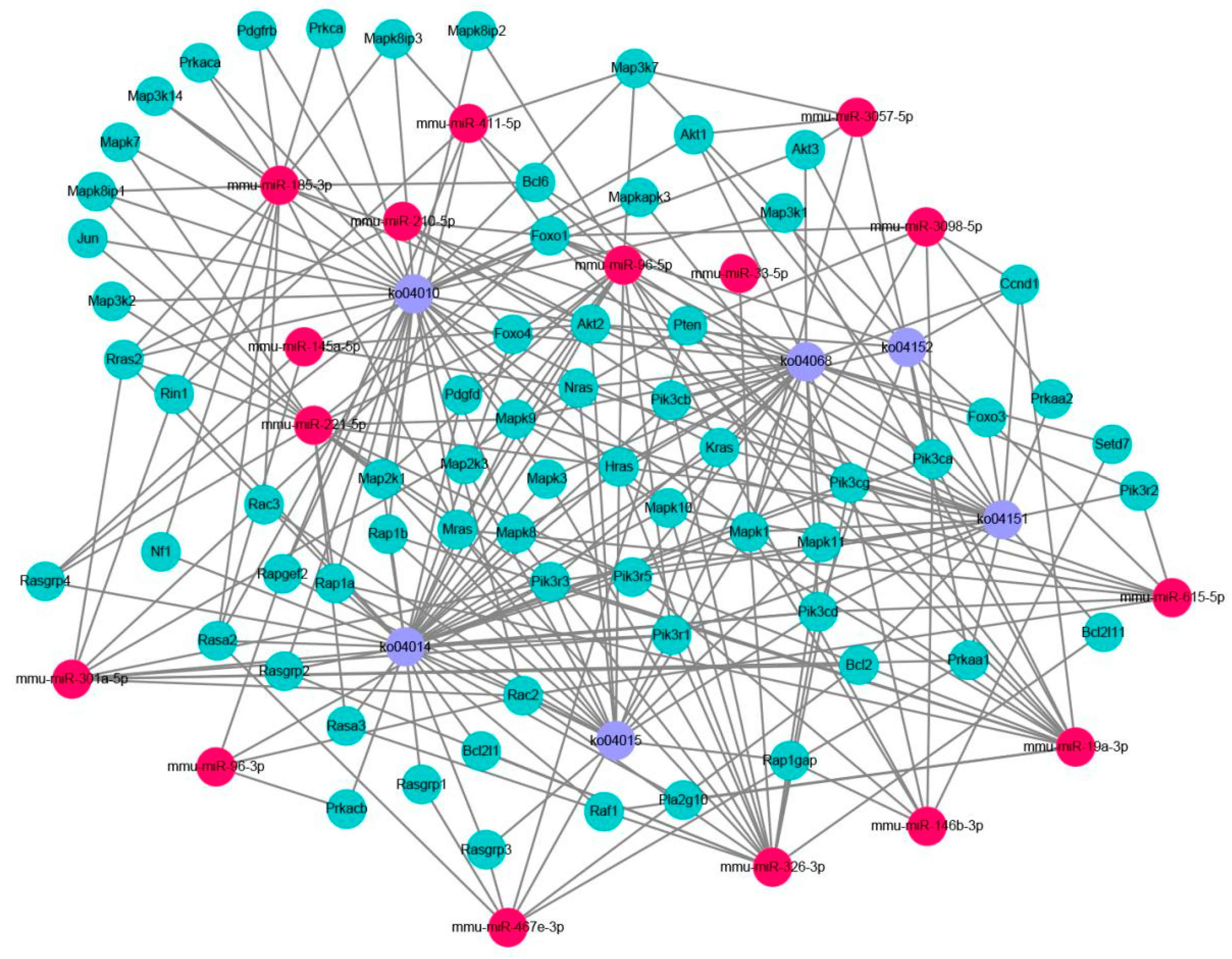 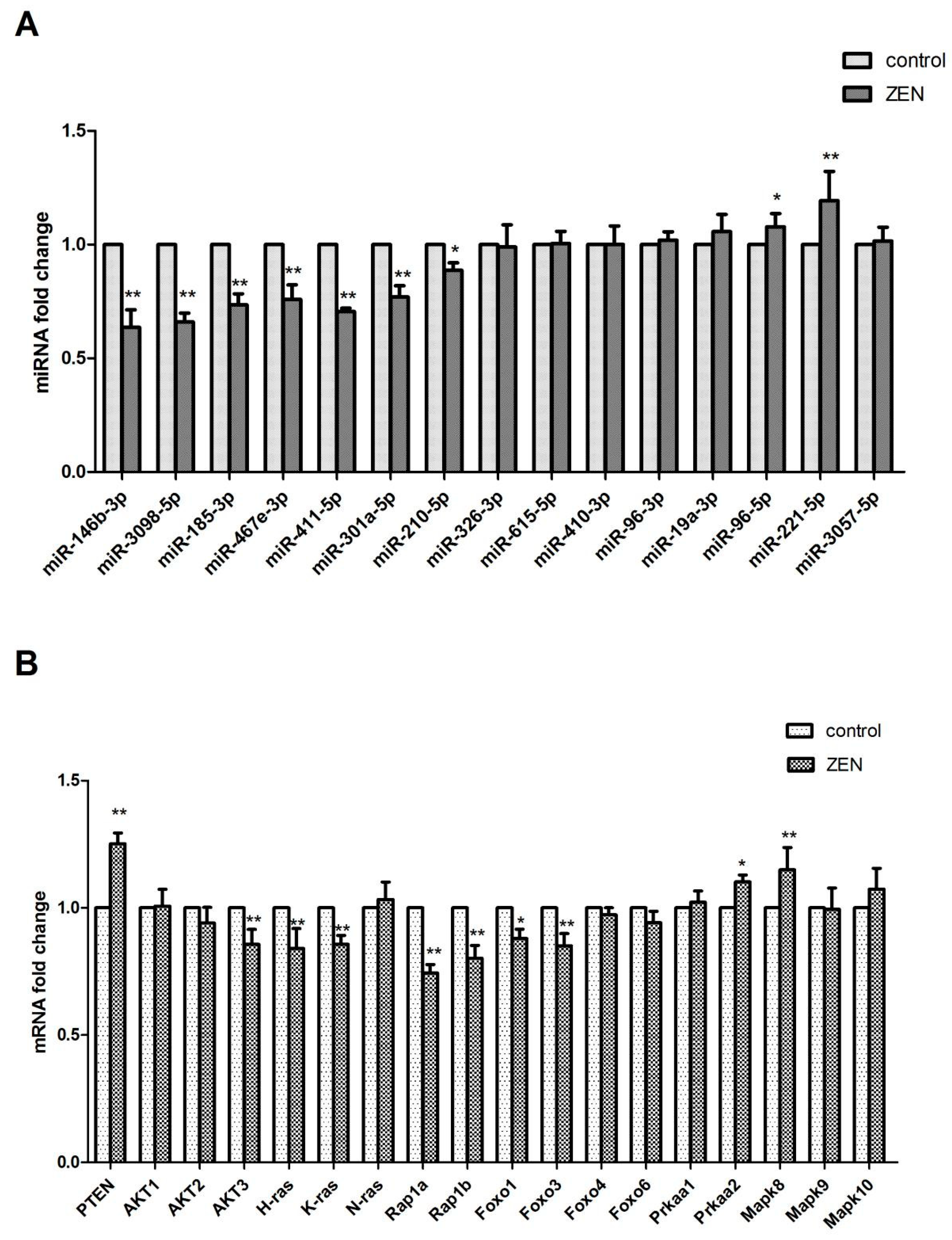