Pericytes in Microvessels: From “Mural” Function to Brain and Retina Regeneration
Previous Article in Journal

Sequential Transcriptome Changes in the Penumbra after Ischemic Stroke

The limitations of RNA sequencing make it difficult to accurately predict alternative splicing (AS) and alternative polyadenylation (APA) events and long non-coding RNAs (lncRNAs), all of which reveal transcriptomic diversity and the complexity of gene regulation. Gnetum, a genus with ambiguous phylogenetic placement in seed plants, has a distinct stomatal structure and photosynthetic characteristics. In this study, a full-length transcriptome of Gnetum luofuense leaves at different developmental stages was sequenced with the latest PacBio Sequel platform. After correction by short reads generated by Illumina RNA-Seq, 80,496 full-length transcripts were obtained, of which 5269 reads were identified as isoforms of novel genes. Additionally, 1660 lncRNAs and 12,998 AS events were detected. In total, 5647 genes in the G. luofuense leaves had APA featured by at least one poly(A) site. Moreover, 67 and 30 genes from the bHLH gene family, which play an important role in stomatal development and photosynthesis, were identified from the G. luofuense genome and leaf transcripts, respectively. This leaf transcriptome supplements the reference genome of G. luofuense, and the AS events and lncRNAs detected provide valuable resources for future studies of investigating low photosynthetic capacity of Gnetum. View Full-Text
Keywords: Gnetum; full-length transcriptome; high throughout-put sequencing; bHLH gene; leaf Gnetum; full-length transcriptome; high throughout-put sequencing; bHLH gene; leaf
►▼ Show Figures 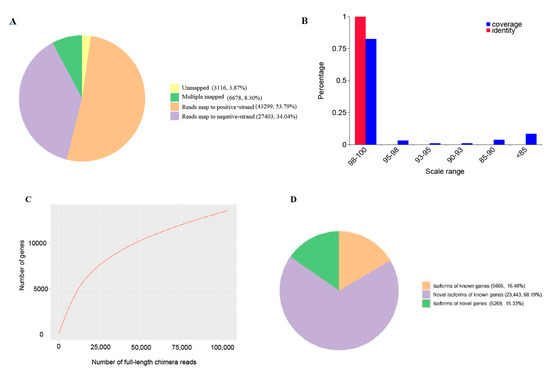