PRP and BMAC for Musculoskeletal Conditions via Biomaterial Carriers

Defects in the extracellular matrix protein fibrillin-1 that perturb transforming growth factor beta (TGFβ) bioavailability lead to Marfan syndrome (MFS). MFS is an autosomal-dominant disorder, which is associated with connective tissue and skeletal defects, among others. To date, it is unclear how biological sex impacts the structural and functional properties of bone in MFS. The aim of this study was to investigate the effects of sex on bone microarchitecture and mechanical properties in mice with deficient fibrillin-1, a model of human MFS. Bones of 11-week-old male and female Fbn1mgR/mgR mice were investigated. Three-dimensional micro-computed tomography of femora and vertebrae revealed a lower ratio of trabecular bone volume to tissue volume, reduced trabecular number and thickness, and greater trabecular separation in females vs. males. Three-point bending of femora revealed significantly lower post-yield displacement and work-to-fracture in females vs. males. Mechanistically, we found higher Smad2 and ERK1/2 phosphorylation in females vs. males, demonstrating a greater activation of TGFβ signaling in females. In summary, the present findings show pronounced sex differences in the matrix and function of bones deficient in fibrillin-1 microfibrils. Consequently, sex-specific analysis of bone characteristics in patients with MFS may prove useful in improving the clinical management and life quality of these patients, through the development of sex-specific therapeutic approaches. View Full-Text
Keywords: biomechanics; bone architecture; fibrillin; Marfan syndrome; sex; TGFβ signaling biomechanics; bone architecture; fibrillin; Marfan syndrome; sex; TGFβ signaling
►▼ Show Figures 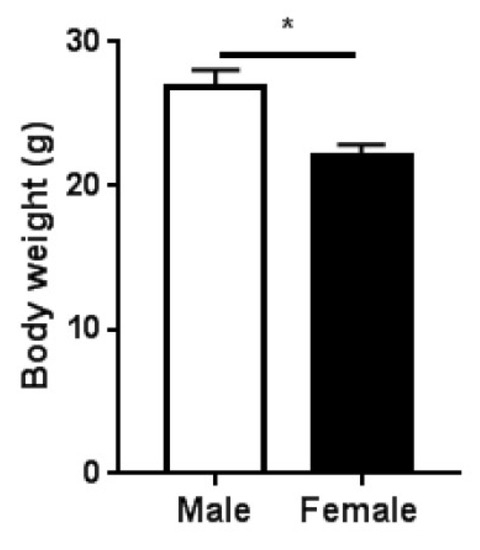