We have evidence that the intravenous infusion of sodium nitrite (NaNO2) results in an antiarrhythmic effect when given 24 h prior to an ischemia and reperfusion (I/R) insult in anaesthetized dogs. This protection was associated with the reduction of reactive oxygen species resulting from I/R through the attenuation of mitochondrial respiration. Here, we examined whether the changes in calcium, which also contributes to arrhythmia generation, play a role in the NaNO2-induced effect. On the first day, 30 anaesthetized dogs were treated either with saline or NaNO2 (0.2 µmol/kg/min) for 20 min. Some animals were subjected to a 25 min LAD (anterior descending branch of the left coronary artery) occlusion and 2 min reperfusion (I/R = 4; NaNO2-I/R = 6), or the heart was removed 24 h later. We have shown that nitrite prevented the I/R-induced increase in cellular and mitochondrial calcium deposits. During simulated I/R, the amplitude of the calcium transient and the diastolic calcium level were significantly lower in the nitrite-treated hearts and the ERP (effective refractory period) fraction of the action potential was significantly increased. Furthermore, nitrite also enhanced the mitochondrial respiratory response and prevented the MPTPT opening during calcium overload. These results suggest that nitrite can reduce the harmful consequences of calcium overload, perhaps directly by modulating ion channels or indirectly by reducing the mitochondrial ROS (reactive oxygen species) production. View Full-Text
Keywords: ischemia/reperfusion; arrhythmia; sodium nitrite; calcium transient; mitochondrial respiration ischemia/reperfusion; arrhythmia; sodium nitrite; calcium transient; mitochondrial respiration
►▼ Show Figures 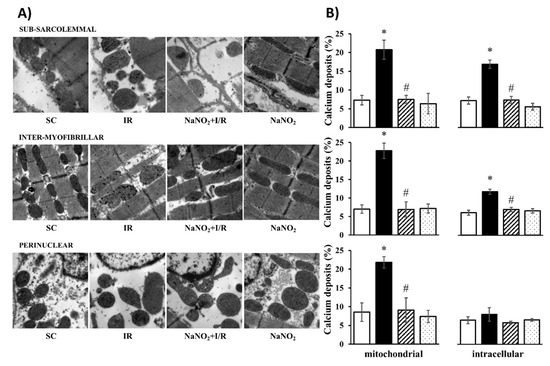