Rett Syndrome and CDKL5 Deficiency Disorder: From Bench to Clinic

Methyl-CpG binding protein 2 (MeCP2) is a multi-function factor involved in locus-specific transcriptional modulation and the regulation of genome architecture, e.g., pericentric heterochromatin (PCH) organization. MECP2 mutations are responsible for Rett syndrome (RTT), a devastating postnatal neurodevelopmental disorder, the pathogenetic mechanisms of which are still unknown. MeCP2, together with Alpha-thalassemia/mental retardation syndrome X-linked protein (ATRX), accumulates at chromocenters, which are repressive PCH domains. As with MECP2, mutations in ATRX cause ATR-X syndrome which is associated with severe intellectual disability. We exploited two murine embryonic stem cell lines, in which the expression of MeCP2 or ATRX is abolished. Through immunostaining, chromatin immunoprecipitation and western blot, we show that MeCP2 and ATRX are reciprocally dependent both for their expression and targeting to chromocenters. Moreover, ATRX plays a role in the accumulation of members of the heterochromatin protein 1 (HP1) family at PCH and, as MeCP2, modulates their expression. Furthermore, ATRX and HP1 targeting to chromocenters depends on an RNA component. 3D-DNA fluorescence in situ hybridization (FISH) highlighted, for the first time, a contribution of ATRX in MeCP2-mediated chromocenter clustering during neural differentiation. Overall, we provide a detailed dissection of the functional interplay between MeCP2 and ATRX in higher-order PCH organization in neurons. Our findings suggest molecular defects common to RTT and ATR-X syndrome, including an alteration in PCH. View Full-Text
Keywords: MECP2; ATRX; pericentric heterochromatin; HP1; Rett syndrome; neurons MECP2; ATRX; pericentric heterochromatin; HP1; Rett syndrome; neurons
►▼ Show Figures 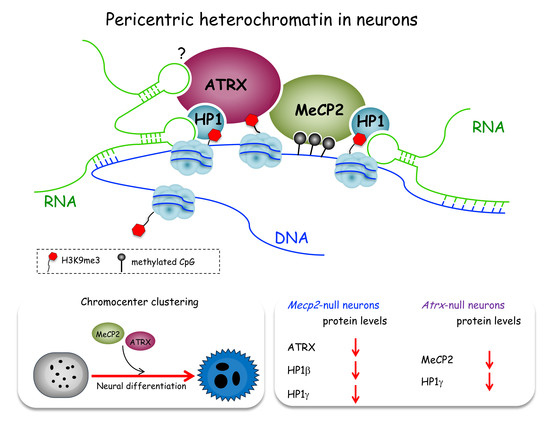