The SGLT2 Inhibitor Canagliflozin Prevents Carcinogenesis in a Mouse Model of Diabetes and Non-Alcoholic Steatohepatitis-Related Hepatocarcinogenesis: Association with SGLT2 Expression in Hepatocellular Carcinoma
Next Article in Special Issue

The Impact of Chemotherapy on the Ovaries: Molecular Aspects and the Prevention of Ovarian Damage
Previous Article in Journal

WIN55,212-2-Induced Expression of Mir-29b1 Favours the Suppression of Osteosarcoma Cell Migration in a SPARC-Independent Manner
Previous Article in Special Issue

Insights into the Pathophysiology of Infertility in Females with Classical Galactosaemia

Classical galactosaemia (CG) (OMIM 230400) is a rare inborn error of galactose metabolism caused by deficiency of the enzyme galactose-1-phosphate uridylyltransferase (GALT, EC 2.7.7.12), the second enzyme in the Leloir pathway, the pathway for galactose metabolism [1]. Classical galactosaemia is also known as Type 1. Type 2 galactosaemia is caused by mutation of the GALK1 gene, characterized by deficiency of galactose kinase 1 enzyme. Type 3 is caused by mutations involving the GALE gene, characterized by deficiency of the enzyme UDP-galactose-4-epimerase. Recently, Wada et al. [2] described novel finding pathogenic variants of the GALM gene which encodes galactose mutarotase, the enzyme which catalyzes the epimerization between β and α-D-galactose in the first step of the Leloir pathway in patients with ‘unexplained congenital galactosaemia. This has suggested a new Type IV classification for galactosaemia [2].
The prevalence of classical galactosaemia (CG), Type 1, ranges from 1:16,000 to 1:60,000 in Europe and USA [3,4]. The incidence in the Irish population is 1:16,476 and is 1:430 in the Irish Traveller community [4]. Although classical galactosaemia has been described since 1908 and the gene identified in 1992, it is still considered a partially treated rare disease. Restriction of galactose is life-saving in the neonate and improves the neonatal intoxication manifestations of feeding difficulties, failure to thrive, sepsis, hepatocellular damage, renal tubulopathy, and cataracts. Affected individuals develop long term complications affecting the central nervous system, bone density/metabolism, and primary ovarian insufficiency and subfertility in females despite dietary galactose restriction [4,5,6,7,8,9]. Primary ovarian insufficiency in CG, first described in 1978 [10] with ovarian follicular depletion is reported in at least 80% of females [9]. This is a particularly devastating complication for affected females. Moreover, the timing of the ovarian insult and its pathophysiology are poorly understood, which limits interventions. This article aims to clarify recent insights into the pathophysiology of this presentation, and the consideration of new therapeutic interventions.

Literature on the effects of CG on the female reproductive system was reviewed by an extensive Pubmed search (publications from January 1975 to September 2019) using the keywords: galactosaemia; ovarian function/dysfunction; primary ovarian insufficiency/failure; follicle stimulating hormone (FSH); oxidative stress; fertility preservation. In addition, articles cited in the search articles and literature known to the authors were also included in this review. A review of the Cochrane database was also performed with the condition ‘Galactosaemia.’ This did not indicate any review relating to infertility in females with CG.

Galactose is converted to glucose-1-phosphate and metabolized to release energy, or alternatively, galactose may be metabolized to UDP-galactose (UDP-GAL) and its derivatives. UDP-GAL is an essential cofactor for the galactose transferases that are involved in the incorporation of galactose into glycoproteins and glycolipids [11]. Galactosaemia is an inborn error of metabolism resulting in impaired activity of one of the four enzymes involved in the main galactose metabolism pathway (known as the Leloir pathway): galactokinase (GALK), galactose-1-phosphate uridylyltransferase (GALT), UDP galactose 4-epimerase (GALE) and the recently described galactose mutarotase (GALM) deficiency, (Figure 1a). Deficiency in GALT causes classical galactosaemia Type 1 (CG). Although the liver is the major organ for galactose metabolism, the enzymes of the Leloir pathway have been found in many cell types and tissues, including the gonads, intestinal mucosa, kidneys, skeletal muscles, fibroblasts, leukocytes, and red cells. Galactose-1-phosphate uridylyltransferase and galactokinase are present in fetal red cells, the liver, the lung, the spleen, and cardiac muscle from at least 10 weeks’ gestation, and their activities are higher in the second and third trimesters than at any time postnatally [12]. This suggests the possibility that damage may occur in utero in GALT deficiency. Studies in rat tissue showed the liver to have the highest GALT mRNA and GALT activity. Kidneys, ovaries, and the heart have similar but lower mRNA and GALT activities, and skeletal muscle and testes have the least [13]. The long-term complications of CG are known to be present in organs with high physiological GALT-expression. Endogenous galactose production occurs in utero and throughout life. It is age-related, with higher levels in children than in adults. The endogenous production of circulating free galactose in adults ranges from 0.53 to 1.05 mg/kg/h [14,15].
Classical galactosaemia represents the most severe form of this disorder as a result of profound impairment in GALT resulting in accumulation of galactose, galactose-1-phosphate, galactitol, and galactonate in body tissues and fluid. Over 300 different mutations are described in the GALT gene [21]. The commonest genotype in European populations is the homozygous GALT Q188R genotype which involves the enzyme’s active catalytic site and is associated with a severe phenotype [22]. The S135L variant, predominantly found in the African and African-American populations, results in significant GALT residual activity and a generally milder phenotype [23].

The Galactosemia Network (GalNet) makes recommendations for girls and women with CG, for annual monitoring for menstrual abnormalities, secondary amenorrhoea, and symptoms of POI, including FSH levels. Women with hypergonadotropic hypogonadism or POI should have counselling and support on their reproductive options and management of their irregular or absent menses. A referral to a reproductive endocrinologist can be offered to women who desire pregnancy but are unable to conceive naturally or who would like to know other available fertility treatment [64].
One of the key challenges to prevention of POI from CG remains the uncertainty of the timing of the irreversible changes, which may be within the first 10 years of life with a likely prenatal effect. The current approach to treatment for galactosaemic women with POI mainly involves hormonal replacement with oestrogen supplementation and added progesterone to reduce the risk of endometrial hyperplasia or cancer.
Despite the high prevalence of POI and infertility in women with galactosaemia, spontaneous unassisted pregnancies are possible, even repeatedly. They have been reported and are not as rare as previously assumed as demonstrated by the recent study referred to earlier [40]. This should be emphasized to patients and they should not be discouraged from trying conceiving naturally. The chances of conceiving are higher in patients who reached puberty spontaneously and in younger patients, as in any woman, fertility declines with age.
A conservative approach to achieve pregnancy in POI is through ovarian stimulation. If this fails or is not possible, the next available treatment option is oocyte donation. Female CG patients have been reported to have successful pregnancy after this procedure [40]. Even though this procedure has been proven to be effective with higher pregnancy rates; the cost, availability of donor eggs, and need for psychological counselling are limiting factors. Embryo freezing after in vitro fertilization (IVF) is another available option with good outcomes. However, a major limiting factor for this procedure in this cohort of patients is that a large number of eggs would need to be retrieved from controlled ovarian hyperstimulation which may not be effective in CG females with diminished ovarian reserve.
Ovarian tissue cryopreservation and transplantation (OTCP-TP) has dramatically evolved over recent years from experimental breakthrough to a well-accepted treatment. Unlike the conservative treatment approach to POI. This procedure does not require ovarian stimulation. The techniques involve ovarian tissue extraction, freezing/thawing, and in vitro maturation or transplantation back into the same patient. This procedure is remarkably successful, with studies reporting return of ovarian function in up to 95% of graft recipients and pregnancy rates of between 30–50%. The most significant limitation of OTCP-TP is the massive loss of follicles that occurs following transplantation, which is primarily attributed to ischaemic damage and follicle activation [65].
Cutting-edge technologies for in vitro follicle growth, and tissue engineering principles to bioengineer artificial ovaries are currently being explored [66,67].
Currently, there are no defined recommendations for fertility preservation for patients with CG [68]. As the onset of ovarian reserve depletion is still unclear, this complicates the timing to offer fertility preservation. Most of the girls who would benefit from fertility preservation are too young to make the decision and to consent. Counselling female patients with CG regarding their fertility is complex with the evidence of spontaneous pregnancies and it is difficult to predict the ideal candidates for fertility preservation. The publication of van Erven et al. 2017 proposed a number of recommendations regarding fertility preservation in CG females [68]. These included encouraging patients to recognise that spontaneous pregnancies can occur in women with CG with POI, recommendations regarding ovarian cryopreservation at an early pre-pubertal age, aspects of fertility preservation, and other options.

A major breakthrough in infertility is the activation of dormant ovarian follicles using phosphatidylinositol-3-kinase activators and the suppression of the Hippo signalling pathway—with successful pregnancies reported using this method [69,70]. This may be applicable to galactosaemia given that this pathway is involved. However, an overall approach to timely stabilisation of the function of the mutant GALT enzyme during the critical early childhood period (or indeed prenatal period) may be required to stabilise not only the galactose and its products’ intoxication effects, but also the dysfunctional systemic glycosylation defects, and subsequent systemic signalling abnormalities.
Therapeutic strategies for intervention (new treatments in development for CG), such as chaperones, antioxidants, substrate inhibitors, aldose reductase inhibitors, gene modification strategies, proteostasis regulator, or mRNA approaches will also need to consider the prenatal period, although ethical and practical concerns would accompany such intervention. It will be important also to consider at which stage in the postnatal period that any given form of intervention may have the greatest chance for success [58,71,72].
Other treatment options on the horizon include tissue or organ transplantation; for example, liver and in vivo or ex vivo gene therapy. The prospect of utilizing ovarian stem-cell based therapeutics for ovarian regeneration is also interesting. Such advances in reproductive medicine in the pipeline are bringing new hope to women diagnosed with POI from CG [73,74].

Despite several studies, the underlying pathophysiological mechanism and the timing of the ovarian dysfunction of POI from CG remain unclear. Substantial progress accomplished through exponential increase in knowledge in the field of infertility with better understanding of key signalling pathways and biomarkers offer exciting new discoveries and methods to preserve fertility in CG patients.

The authors acknowledge an Irish HRB funding award (HRA-POR-2014-623) to EPT which supported these studies. 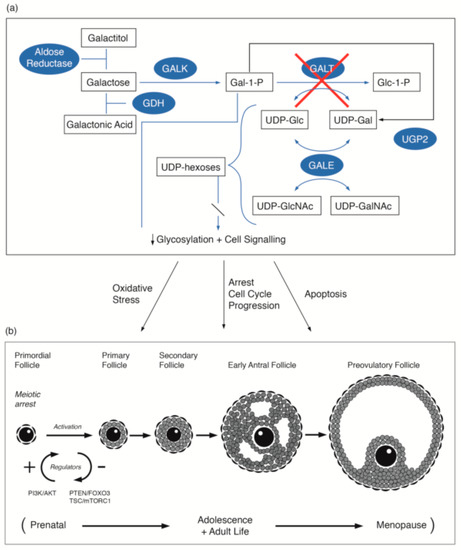