The Effect of the Thermosensitive Biodegradable PLGA–PEG–PLGA Copolymer on the Rheological, Structural and Mechanical Properties of Thixotropic Self-Hardening Tricalcium Phosphate Cement
Next Article in Special Issue

Hibernation and Radioprotection: Gene Expression in the Liver and Testicle of Rats Irradiated under Synthetic Torpor

Heat Shock Factor A2 (HsfA2) is part of the Heat Shock Factor (HSF) network, and plays an essential role beyond heat shock in environmental stress responses and cellular homeostatic control. Arabidopsis thaliana cell cultures derived from wild type (WT) ecotype Col-0 and a knockout line deficient in the gene encoding HSFA2 (HSFA2 KO) were grown aboard the International Space Station (ISS) to ascertain whether the HSF network functions in the adaptation to the novel environment of spaceflight. Microarray gene expression data were analyzed using a two-part comparative approach. First, genes differentially expressed between the two environments (spaceflight to ground) were identified within the same genotype, which represented physiological adaptation to spaceflight. Second, gene expression profiles were compared between the two genotypes (HSFA2 KO to WT) within the same environment, which defined genes uniquely required by each genotype on the ground and in spaceflight-adapted states. Results showed that the endoplasmic reticulum (ER) stress and unfolded protein response (UPR) define the HSFA2 KO cells’ physiological state irrespective of the environment, and likely resulted from a deficiency in the chaperone-mediated protein folding machinery in the mutant. Results further suggested that additional to its universal stress response role, HsfA2 also has specific roles in the physiological adaptation to spaceflight through cell wall remodeling, signal perception and transduction, and starch biosynthesis. Disabling HsfA2 altered the physiological state of the cells, and impacted the mechanisms induced to adapt to spaceflight, and identified HsfA2-dependent genes that are important to the adaption of wild type cells to spaceflight. Collectively these data indicate a non-thermal role for the HSF network in spaceflight adaptation. View Full-Text
Keywords: spaceflight; Arabidopsis; plant cell culture; undifferentiated cells; microgravity; heat shock spaceflight; Arabidopsis; plant cell culture; undifferentiated cells; microgravity; heat shock
►▼ Show Figures 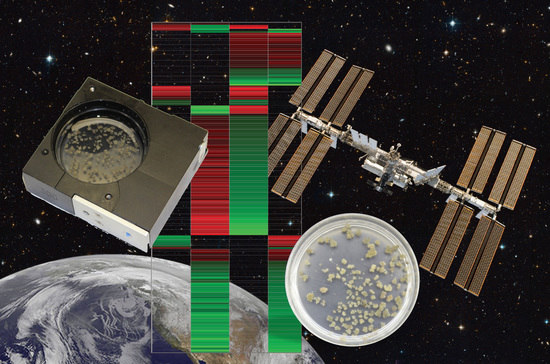