Male-sterile plants provide an important breeding tool for the heterosis of hybrid crops, such as Brassicaceae. In the last decade, circular RNAs (circRNAs), as a novel class of covalently closed and single-stranded endogenous non-coding RNAs (ncRNAs), have received much attention because of their functions as “microRNA (miRNA) sponges” and “competing endogenous RNAs” (ceRNAs). However, the information about circRNAs in the regulation of male-sterility and anther development is limited. In this study, we established the Polima cytoplasm male sterility (CMS) line “Bcpol97-05A”, and the fertile line, “Bcajh97-01B”, in Brassica campestris L. ssp. chinensis Makino, syn. B. rapa ssp. chinensis, and performed RNA expression profiling comparisons between the flower buds of the sterile line and fertile line by whole-transcriptome sequencing. A total of 31 differentially expressed (DE) circRNAs, 47 DE miRNAs, and 4779 DE mRNAs were identified. By using Cytoscape, the miRNA-mediated regulatory network and ceRNA network were constructed, and the circRNA A02:23507399|23531438 was hypothesized to be an important circRNA regulating anther development at the post-transcriptional level. The gene ontology (GO) analysis demonstrated that miRNAs and circRNAs could regulate the orderly secretion and deposition of cellulose, sporopollenin, pectin, and tryphine; the timely degradation of lipids; and the programmed cell death (PCD) of tapetum cells, which play key roles in anther development. Our study revealed a new circRNA–miRNA–mRNA network, which is involved in the anther development of B. campestris, which enriched the understanding of CMS in flowering plants, and laid a foundation for further study on the functions of circRNAs and miRNAs during anther development. View Full-Text
Keywords: cytoplasmic male sterility; CMS; Polima; Brassica campestris; whole-transcriptome sequencing; ceRNA; circRNA; miRNA; anther cytoplasmic male sterility; CMS; Polima; Brassica campestris; whole-transcriptome sequencing; ceRNA; circRNA; miRNA; anther
►▼ Show Figures 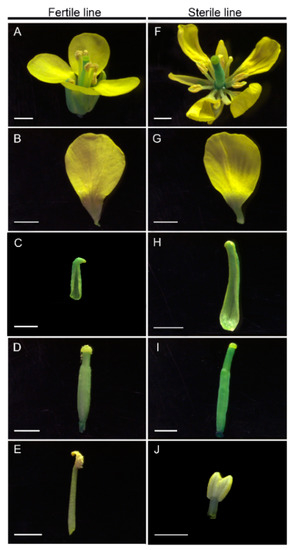