Proteome Profiling of the Exhaled Breath Condensate after Long-Term Spaceflights

Comprehensive studies of the effects of prolonged exposure to space conditions and the overload experienced during landing on physiological and biochemical changes in the human body are extremely important in the context of planning long-distance space flights, which can be associated with constant overloads and various risk factors for significant physiological changes. Exhaled breath condensate (EBC) can be considered as a valuable subject for monitoring physiological changes and is more suitable for long-term storage than traditional monitoring subjects such as blood and urine. Herein, the EBC proteome changes due to the effects of spaceflight factors are analyzed. Thirteen EBC samples were collected from five Russian cosmonauts (i) one month before flight (background), (ii) immediately upon landing modules in the field (R0) after 169–199 days spaceflights, and (iii) on the seventh day after landing (R+7). Semi-quantitative label-free EBC proteomic analysis resulted in 164 proteins, the highest number of which was detected in EBC after landing (R0). Pathways enrichment analysis using the GO database reveals a large group of proteins which take part in keratinization processes (CASP14, DSG1, DSP, JUP, and so on). Nine proteins (including KRT2, KRT9, KRT1, KRT10, KRT14, DCD, KRT6C, KRT6A, and KRT5) were detected in all three groups. A two-sample Welch’s t-test identified a significant change in KRT2 and KRT9 levels after landing. Enrichment analysis using the KEGG database revealed the significant participation of detected proteins in pathogenic E. coli infection (ACTG1, TUBA1C, TUBA4A, TUBB, TUBB8, and YWHAZ), which may indicate microbiota changes associated with being in space. This assumption is confirmed by microbial composition analysis. In general, the results suggest that EBC can be used for noninvasive monitoring of health status and respiratory tract pathologies during spaceflights, and that the obtained data are important for the development of medicine for use in extreme situations. Data are available from ProteomeXchange using the identifier PXD014191. View Full-Text
Keywords: spaceflight; exhaled breath condensate; proteomics; mass-spectrometry; astronauts; extreme conditions spaceflight; exhaled breath condensate; proteomics; mass-spectrometry; astronauts; extreme conditions
►▼ Show Figures 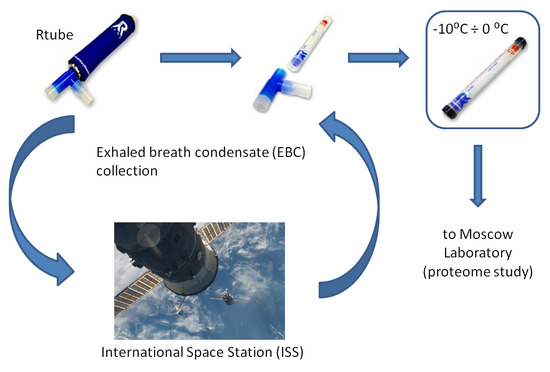