The Effects of Spaceflight Factors on the Human Plasma Proteome, Including Both Real Space Missions and Ground-Based Experiments

Previously, we investigated the dose response for chromosomal aberration (CA) for exposures corresponding to less than one particle traversal per cell nucleus by high energy and charge (HZE) particles, and showed that the dose responses for simple exchanges for human fibroblast irradiated under confluent culture conditions were best fit by non-linear models motivated by a non-targeted effect (NTE). Our results suggested that the simple exchanges in normal human fibroblasts have an important NTE contribution at low particle fluence. Nitric oxide (NO) has been reported as a candidate for intercellular signaling for NTE in many studies. In order to estimate the contribution of NTE components in induced CA, we measured CA with and without an NO scavenger in normal skin fibroblasts cells after exposure to 600 MeV/u and 1 GeV/u 56Fe ions, less than one direct particle traversal per cell nucleus. Yields of CA were significantly lower in fibroblasts exposed to the NO scavenger compared to controls, suggesting involvement of NO in cell signaling for induction of CA. Media transferred from irradiated cells induced CA in non-irradiated cells, and this effect was abrogated with NO scavengers. Our results strongly support the importance of NTE contributions in the formation of CA at low-particle fluence in fibroblasts. View Full-Text
Keywords: ionizing radiation; chromosome aberrations; non-targeted effects ionizing radiation; chromosome aberrations; non-targeted effects
►▼ Show Figures 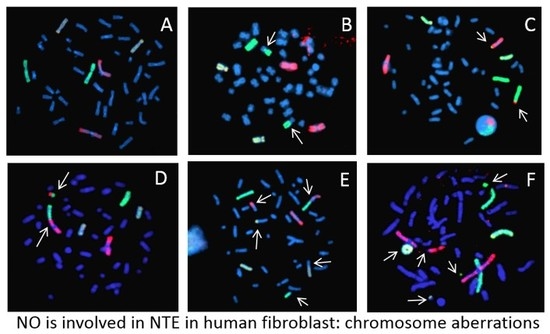